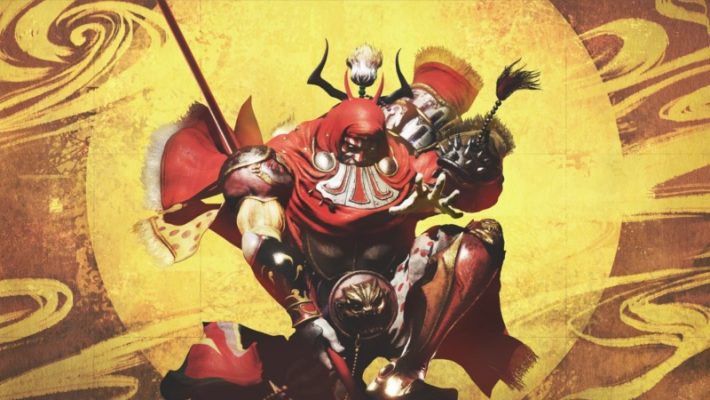 Check out a trailer for the Stranger of Paradise DLC below.

Note that some of the scenes shown may constitute spoilers for Stranger of Paradise: Final Fantasy Origin.

As shown in the trailer and a piece of key art uploaded to the official Final Fantasy Origin Twitter account, the Stranger of Paradise: Wanderer of the Rift DLC features Gilgamesh. The character first appeared in Final Fantasy V, and has made cameos or played roles in most Final Fantasy titles since. Though his appearance has varied, this version of Gilgamesh matches his most common and recognized design. Dressed in red-orange armor, with a style that evokes the appearance the legendary Japanese warrior-monk Benkei, and a white-painted face with red stripes in the Kabuki fashion.

The trailer briefly shows glimpses of Jack’s fight with the legendary warrior who passes through a dimensional rift. Gilgamesh uses some of his signature attacks, which are based on his reputation as a collector of legendary weapons. He uses Zantetsuken, and poses with it, while his character design holds his trademark naginata polearm. He also uses a move called Gigasplode.

Stranger of Paradise: Final Fantasy Origin is available on PS4, PS5, Xbox One, Xbox Series X|S, and PC. The Wanderer of the Rift DLC expansion launches on October 26, 2022. It’s only available by purchasing the Season Pass, which also unlocks Trials of the Dragon King and the next DLC expansion, Different Future. Check out Siliconera’s official review of the base game.