New Super Mario Bros. Wii has been a roaring success, with 14.7 million units sold to date, and it continues to sell consistently, making it another successful title in the long-term by Nintendo’s standards. However, if you break the sales down by region, it looks something like this: 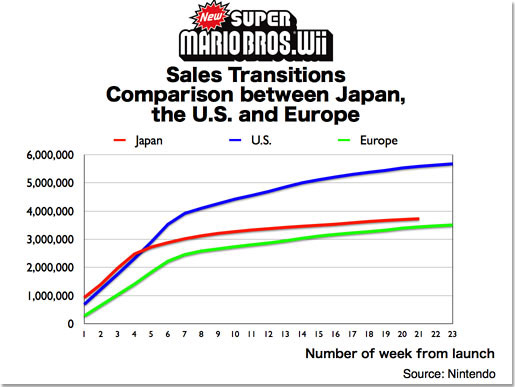 Notice the lower sales curve in Europe? Nintendo did, too, and Satoru Iwata pointed it out to investors with an explanation:

“In Japan and in the United States, video games established its position as a part of pop culture when the original Super Mario Bros. launched back in the days when we were selling Famicom in Japan and Nintendo Entertainment System or NES for short in the U.S. Back then, a lot of people must have enjoyed playing Super Mario Bros. and the fond memories must have remained in their hearts.

On the contrary, in Europe, Nintendo did not have its own subsidiary to market its products, and NES did not spread as widely as in Japan or in the U.S. Because of this background, Europeans may feel less nostalgia for Super Mario than the Japanese or the Americans, which may have caused the comparatively weaker sales of this software so far in Europe.”

However, Iwata concluded, sales potential for Mario games in Europe is vast, and Nintendo look forward to the sales progress of the series. Perhaps this is why, in addition to Japan, Europe, too, is getting the “Super Mario Galaxy 2 for beginners” DVD pack-in with the game.