It has been a while since Nintendo has released a classic Mario game. Ever since Super Mario 64 the series has evolved into a collect-a-thon instead of focusing on action and jumping. New Super Mario Bros for the Nintendo DS attempts to bring the series back to its roots. While the game uses 3D models it is a side scrolling platformer similar to Super Mario Brothers for the NES. Want to find out how the game plays? Then read on. 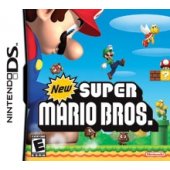 Even though New Super Mario Bros is a 2D game Mario has some new moves and abilities. Some of his acrobatic skills from Super Mario 64 like the triple jump, wall jump and the ground pound are all in the game. Players might be surprised to know that even though Mario has an extensive move set everything can be done with just the d-pad and two buttons (one for run, one for jump). The simple control scheme makes New Super Mario Brothers easy to play for people haven’t played video games for a long time. The power up system has been simplified too. New Super Mario Bros. goes back to basics just regular Mario, Super Mario and Fire Mario as the main set of power ups. No raccoon tail for flying or Yoshi to ride on. Once Mario changes into Fire Mario he can throw fire balls and endure two hits. The first hit just reduces him back to Super Mario. New power ups in the game include Mega Mario, which makes Mario grow even larger and lets him go on a rampage in the level. Picking up a tiny blue mushroom does exactly the opposite, it turns Mario into mini Mario. As mini Mario you can explore special areas, do higher jumps and run on water. However a single hit spells the end of mini Mario and you won’t be able to stomp on a koopas, mini Mario just bounces off their heads. Lastly Nintendo added in a blue shell power up that lets Mario do a spinning shell attack by running then ducking. The blue shell attack can defeat enemies immune to fire balls like dry bones and break blocks to open up new areas.

Using these new powers you will guide Mario through eight worlds to once again rescue Princess Peach from the clutches of Bowser. New Super Mario Bros has all of the obligatory level themes like an ice level, desert world and a water world to explore. New Super Mario Bros. didn’t reinvent the wheel here. Instead it focuses on brilliant level design. The first world has simple levels with a few goombas and question mark blocks in the sky. Soon players are going to have to master the wall climb, battle ghosts that break bricks and face moving platforms. In one castle level Mario climbs the castle thanks to a moving platform. While going for a ride spiked balls roll on and off the platform for Mario to avoid. Each stage in New Super Mario Bros is different and there are elements that will even make the most hardcore Mario fans think the game is clever. On the other hand the majority of levels aren’t taxing. Racing to grab the flag at the end of the stage isn’t hard and the bosses haven’t changed their strategy from Super Mario Brothers 3. Bowser Jr.’s antics are the same as Boom Boom, he runs around and all Mario needs to do is jump on his head three times.

It is possible that Nintendo opted to tone down the difficulty to make the game more appealing to the DS’ non gamer audience. For the core gaming crowd Nintendo has some challenges such as collecting star coins in each level. To collect the three star coins you need to take advantage of Mario’s new powers and be prepared for some jumping challenges. Star coins can be ignored, but if you want to open up alternate paths and mushroom shops players will have to collect them. Some levels also have a red coin challenge too. After jumping through a spinning red hoop eight red coins will temporarily appear for Mario to snag. Get all eight and Mario will get a power up like a fire flower or extra life.

Beyond the main game there are eighteen different mini games to play. Unlike the main game, the mini games take advantage of the DS’ unique abilities. One game has Yoshi with two balloons and players need to blow on the DS’ microphone to guide Yoshi to the top of the castle. Luigi’s ghost hunting game blacks out the bottom screen when Big Boo turns off the lights. Using the stylus you can clear away the shadows and find ghosts. In the puzzle section there is a Where’s Waldo style game where you have to find Mario, Luigi or Wario’s face among a group using the stylus. One of the more addicting games is the fly guy game where three Marios fall from the sky to bounce on the heads of flying shy guys. It is the player’s job to keep all the Marios airborne by tapping them with the stylus. The mini games are a great addition to New Super Mario Bros since Nintendo could have packaged these games as separate title. The mini games also support DS wireless play for up to four players so grab some friends. Or try out Mario versus Luigi a two player level dash to see who can collect a giant golden star first.

We picked up the North America version since it was released first, but even if the game’s small amount of text wasn’t in English it would still be easy enough for anyone to pick up.

Nintendo released this game on 05.15.06 in North America and it is coming to Japan later this month on the 25th.

+ Pros: Nintendo and Miyamoto still have the magic to create an excellent 2D platforming game. Plus the mini games are icing on the cake.

– Cons: Unlike the other Mario games, New Super Mario Bros. is not terribly innovative.

Overall: It might be a tad on the easy side, but that is what makes New Super Mario Bros. a game that everyone can enjoy. If you have a DS this is a must buy.

By Lucas White11 hours ago

Hero Must Die. Again Is an Optimistic Reaction to Grief

By Lucas White1 day ago

How to Get Started in Fire Emblem Heroes

By Alistair Wong2 days ago

By Jenni Lada5 days ago