Note: This session naturally contains a few spoilers for NieR. 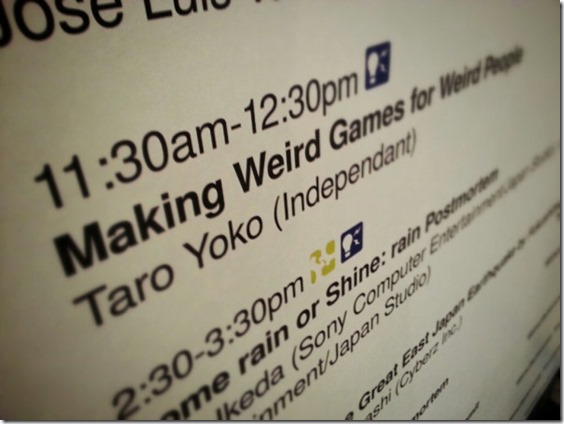 At a panel at GDC this morning, titled “Making Weird Games for Weird People,” Drakengard and Nier creator Taro Yoko—in a typically off-kilter fashion—began with his conclusion.

Story and gameplay, he said, are not the most important things to him. Neither are graphics or making money. “All I care about is heading for the goal,” Yoko shared. It’s hard to explain just what that goal is, though, he said.

Starting with the conclusion, Yoko revealed, is how he writes his games as well. When he started out, Yoko said, he didn’t know how to write, so he bought books off of Amazon, along the lines of “How to Write a Hollywood Blockbuster”. Unfortunately, he shared, he had no idea what they were talking about.

“What is the self-concept of the main character? How to they view themselves in this world? I just didn’t get it. Maybe it’s because I’m stupid,” he joked.

For a while, Yoko said, he would nod his head, trying to read through these books, but ultimately, he gave up. Instead, he developed his own techniques, which he said are: backwards thinking/scriptwriting and photo-thinking. Backwards scriptwriting, he explained, is the process of creating cause or reason, starting with the conclusion of the story. Yoko cited Nier, which he directed, as one example of this approach.

When making a game, this is the very first thing Yoko puts his head to. The reason, he said, is simple: cost. Oftentimes, the luxury of time and money isn’t available, and one needs to work within their limitations. For this reason, if you’ve never made a game before, Yoko suggests you refer to games that are similar to what you’re making. In fact, you might even want to mimic what they’re doing, he said, and aim for about 70% similarity in both quality and volume. 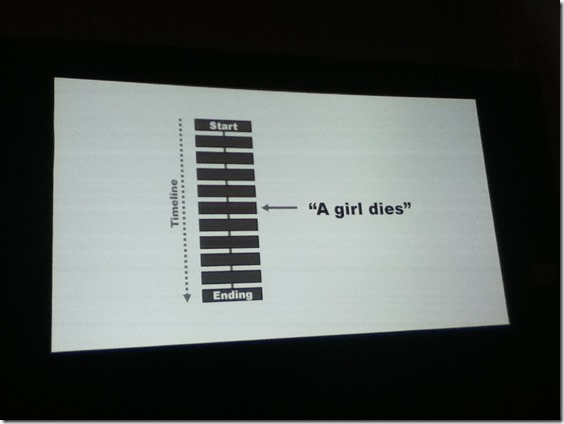 Yoko then presented a slide that said “Emotional Peak”. Sadness, fear, love, pain, cool… these are the emotions we feel when our hearts are moved. The “Emotional Peak” was then replaced with the text “A Girl Dies”.

Let’s say your pet died, Yoko suggested, going off on a slight tangent. Your pet dog, who had played with you since you were a child. Ultimately, it grew old along with you. It’s simple, but a sad event. However, Yoko said, if your pet in a videogame were to die, you probably wouldn’t be sad. This is because your videogame pet hasn’t been sharing your life with you. The difference here is past experiences. So, with that in mind, what would make people feel sad about this girl dying?

One instance in which emotions are triggered is when the weak are treated in a cruel manner. Knights aren’t weak. An example of someone that might be weak would be female children. So, to tie this into the event of the girl dying…

“She is still young.”

To add to that, the young girl has a kind and beautiful personality. She’s done nothing wrong, but unfortunately, her life was taken away. That would make it sad. There’s great sadness the moment she dies. Her happiness, which she was supposed to experience, was shattered. Imagining what that was or could be, it was her dream wedding, Yoko said. Something that she always wanted. 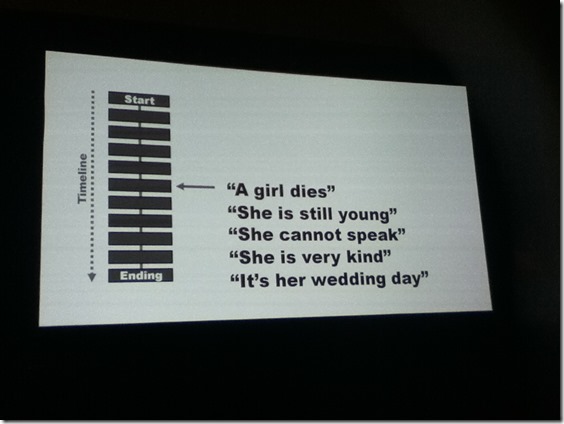 Yoko explained that he takes a step back to look at what he has. He layers on reasons to trigger emotion from the beginning of the game and spreads these elements throughout the story. The Girl Dies –> Her wedding Day –> She is Kind –> Cannot Speak –> She is Young. He searches for reasons such as these that lead him to true sadness. He thinks about these reasons and layers them neatly on top of each other. And this is why backwards scriptwriting works—because you need to come up with causes that would trigger emotion. Reasons for sadness come at the start of the game, and the player finds the emotional peak at the end. 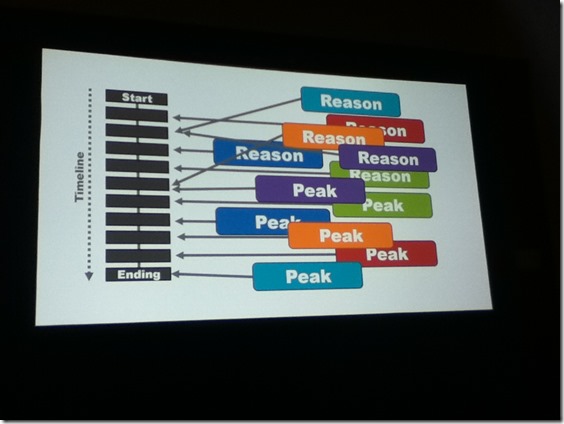 Of course, he added, there are numerous emotional peaks in a final product or game, and each of them demands a stack of reasons to make sense.

Next, Yoko discussed photo-thinking. This he says, is the concept of envisioning the situation in your head. The scene where “the girl dies,” for example. How was that written out?

She was killed during her wedding. She was stabbed to death. She’s a citizen of a different land and culture. She wears a mask. She mutters “thank you for marrying me,” as she dies. That scene was visualized, Yoko said, along with all of the additional details—the prince holding her, her feeble voice, her bloody hand.

Taro cited The Memory Palace of Matteo Ricci (a book) at this point. You build a memory palace in your brain, he explained, and place items you wish to remember in your palace as you visualize it in your head. The application of visual memory skills (photo-thinking) is not about remembering something specific, he said, but going there to see, or create, or generate, the scene. Be visualizing the scene in this manner, that image is embedded in your head as the setting of the game. Due to the girl’s death, one understands that the mood in the village is sad and depressing. By traveling inside the brain in this manner, this world will gradually start to form itself, Yoko explained.

At the same time, he cautions, one needs to be careful not to overvisualize things with photo-thinking. Young scriptwriters tell Yoko all the time that they can’t get into creating a setting. They’re distracted by too many meaningless details, Yoko said. When you’re trying to convey an emotional peak, the solution is to make every effort to visualize only the emotional peak, and nothing outside of that. 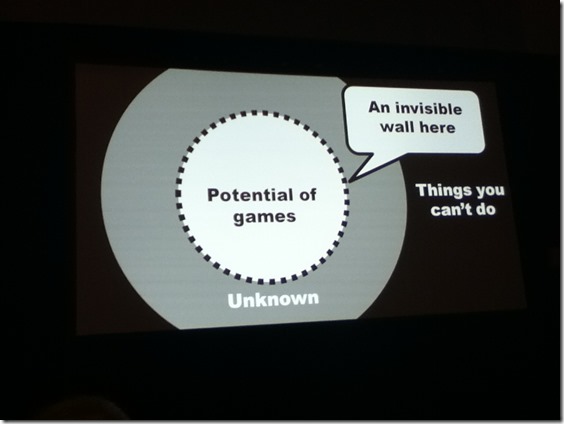 So, if story and gameplay aren’t important, what is? The goal, Yoko revealed, is that players will play the games he makes, and hopefully feel an emotion. The goal is to cause an emotional stir inside the player’s brain, not the middle step of shipping the game to them.

Yoko said he sees a bunch of games on the shelf at GameStop, but isn’t excited by them. The number of well-made games has increased, but the number of games that make his heart pound, that move him, have not. Big-budget games provide lengthy play-time with gorgeous visuals. Meanwhile, in the case of indies, we normally see bite-sized games. Perhaps, he suggested, the industry is entering a blind alley. Yoko would like to fight that. He believes there’s a strong potential for games.

Later in the panel, Yoko moved on to discussing Nier and some of the ways in which that game attempts to move the player. For Nier’s design, he revealed, he was deeply influenced by the events of 9/11 and the world thereafter.

9-11 was an unfortunate event that triggered out of a situation where both sides believed they were doing the right thing. The question is, what did they see from their point-of-view? What does it look like from each other’s perspectives? These were the thoughts that went through his head when he was making Nier.

Yoko said he has spent 20 years trying to move players with his games, but has failed. He failed to break through that invisible wall, into the grey area of gaming, to tap into its full potential, which, to him, is being able to emotionally affect the player in an extreme or otherwise substantial way. However, he still believes in their potential, which is what he was attempting to outline throughout his panel, and that’s the reason he was at GDC today. He wasn’t able to overcome that wall in 20 years, Yoko said, but stated that if members of the audience could attempt to challenge that same invisible wall over the next 20 years, it could amount to 200 years worth of work.

Yoko ended his presentation by asking that the audience—many of which he assumed were much younger than him—take advantage of the fact that they were born with computers and networks around them, and that they possessed skills different from his. The potential for videogames is limitless, Yoko said, and that he would like for everyone to break the wall and step over to the other side.