It’s the first collaboration project between Tetsuya Mizuguchi’s studio Q Entertainment and Phantagram, the masterminds behind the Kingdom Under Fire series. With all of the talent behind it Ninety Nine Nights has a lot to live up to. Is it the quintessential next-generation action game that it was presented to be? No, but it is a hell of a lot of fun to play. Find out why in our playtest. 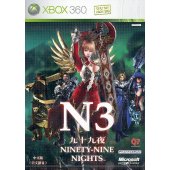 Ninety Nine Nights is set in the fantasy world where a war wages humans and goblins. The Temple Knights led by Inphyy (she’s the one on the cover) and Aspharr lead the humans into battle. Aspharr controls his troops with a clear mind and often wonders about the casualties of the war. Meanwhile, Inphyy desires revenge for the death of her father and wants to rid the world of the goblin scourge. Are the goblins really that evil? The perspective shifts when players take a hand at Dwingvatt, a young goblin troop who watched his brother die by a crimson armored female knight. He seeks to avenge his brother and the humans who invaded his land. The story is only fully revealed when players complete missions with all seven characters.

Ninety Nine Nights throws players right into the heart of an immense battle. Hundreds of characters are on screen at any time, some are allied soldiers at your command and others enemy troops to dispatch. Whether you’re bloodthirsty Inphyy or calm Klarrann you have the power to kill hundreds of warriors in seconds. Ninety Nine Nights has a basic combo system where you press X to do a light attack and Y to do a heavy attack. More complex moves can be done by using adding in the right trigger (dash) and mid air attacks. As one of the warriors fights their way through the battlefield they earn red orbs for each kill. These orbs charge up their orb attack meter. When the meter is full players can press B to use two new powerful attacks. When Aspharr uses his orb attack he shoots bolts of blue energy with his spear. The mercenary Myifee summons a fiery aura around that blasts away surrounding soldiers and Dwingvatt does a teleporting slash through troops. Each fighter that falls to an orb attack gives players blue orbs that charge the orb spark meter. The orb spark is an ultimate attack that covers a wide area. When Inphyy uses her orb attack the sky changes color and the souls of her enemies are absorbed. Myifee’s orb spark summons meteors to fall to the ground.

One thing we haven’t touched upon yet is how combos work on Ninety Nine Nights. While there is a surprisingly deep combo system, most players will just keep mashing the X button to do the longest combo possible. The problem with the progressive system is that it isn’t really well explained. Each new experience level gives players new moves, but they have to reference the start menu to figure out what they are. Also there never really is a reason to try out new attacks. The same attacks from the beginning of the game are just as effective in the last mission. The only time players really need to switch strategies is during boss battles. Bosses spend time blocking attacks and can easily counter long attack chains, which make small heavy attack combos (i.e. Y button) much more useful. Because of this Ninety Nine Nights might not be as immersive as a game that requires players to memorize combos, but on the other hand it is easy to pick up and play.

Taking a cue from the Kingdom Under Fire series Ninety Nine Nights give players two groups of troops to control in most missions. Players can pick between infantry units, pikemen who have a larger attack radius and archers who can fight from a distance to be their allies in battle. As a commander you can only give two orders, attack or defend to your troops. The commands are mostly useless, all they do is decide how far your guard units will approach combat. Also there is no real reason to use any strategy since the goal of each level is to leave no single enemy standing. On one hand the lack of goals and the button mashing makes Ninety Nine Nights repetitive, but it is still entertaining. Watching waves of troops fall to the ground and seeing the combo meter rise to the thousands is exciting. If players take the time to scour the field instead of fighting they can track down valuable items. Most items like life potions and the precious angel wing that grants invincibility are immediately consumed. Other items include accessories to boost stats and precious weapons hidden in far away areas.

Visually, Ninety Nine Nights looks great during combat. The engine allows hundreds of characters to fight on screen with little to no slowdown. Ninety Nine Nights looks even better during the full motion video sequences where you can see the excellent character design and areas up close. However, there are times when the FMV sequences are annoying, such as while you’re fighting an army of Arphann (dark elves). The game cuts right into the action and breaks your combo. There are also some graphical glitches like when you’re fighting near a mountain. Fallen troops can get stuck into the mountain and their lifeless corpses end up hovering in mid air. That’s just a minor problem with the presentation compared to the voice acting. The story’s emotion is lost in between Inphyy’s whiny voice and the mixed up lip synching.

With that aside N3: Ninety Nine Nights is like a summer action flick. There are plenty of intense battles and it is a pretty sight to look at. If you’re into Dynasty Warriors or the Lord of the Rings games, Ninety Nine Nights is clearly worth purchasing. If slicing your way through hundreds of goblins with the push of a button doesn’t appeal to you on paper, Ninety Nine Nights probably won’t be any better when you play it.

+ Pros: Large scale battles to fight and multiple story perspectives on the massive war for the orb.

– Cons: There is the bad voice acting and there is a large amount of repetition on the battlefield.

Overall: Ninety Nine Nights is far from a revolutionary experience, but it is one of the top games in the hack and slash genre.