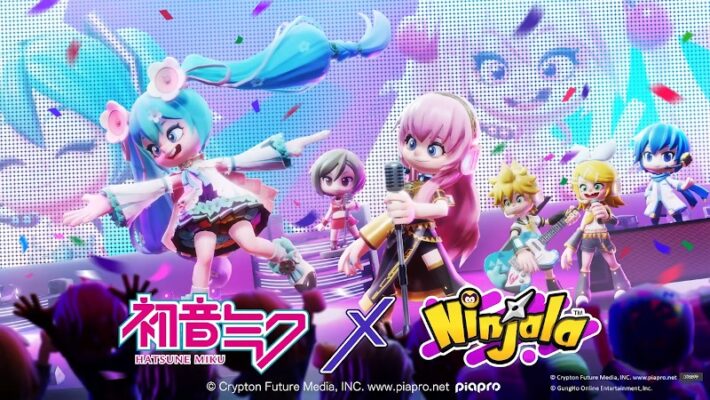 GungHo Online Entertainment has revealed a new Ninjala collaboration event with Hatsune Miku. New in-game content based on the popular Vocaloid and her friends will be available to obtain from October 6, 2021, to November 7, 2021.

Once the tie-up event has begun, players will be able to obtain outfit styles based on Hatsune Miku’s attires. It will also include costumes inspired by Kagamine Rin, Kagamine Len, and Megurine Luka. While KAITO and MEIKO are also featured on the key art, they will only appear as Gum Utsusemi here.

During the event duration, players can also purchase popular songs performed by the Vocaloids. GungHo will also add emotes based on the choreography from songs like “PoPiPo” and “Alien Alien.”

Ninjala Game and Story Designer Kazuki Morishita and Director Motoki Kaneda revealed the Hatsune Miku collaboration news at the 18th Dev Diary. The video is available to watch right below:

GungHo has been adding collaboration content from other franchises to Ninjala in recent months. Before Hatsune Miku, the game had also collaborated with Sonic the Hedgehog, Monster Hunter Rise, and Demon Slayer: Kimetsu no Yaiba.

Ninjala is immediately available worldwide as a free-to-play title on the Nintendo Switch. It has surpassed 7 million downloads as of May 2021.