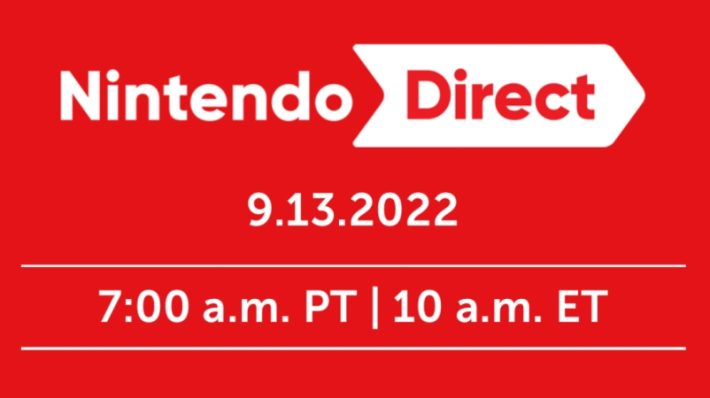 Nintendo will be holding a Nintendo Direct stream event on September 13, 2022. The company, which keeps its broadcast schedules well-guarded from all but the developers making announcements, announced the date on September 12, 2022. This puts the latest Nintendo Direct event just ahead of the opening of the Tokyo Game Show, which kicks off proper on September 15, 2022 in Japan.

Check out the announcement below.

Tune in at 7 a.m. PT tomorrow, 9/13, for a #NintendoDirect livestream featuring roughly 40 minutes of information mostly focused on #NintendoSwitch games launching this winter.

The Nintendo Direct for September 13, 2022 will take place at 07:00 Pacific Time and 10:00 Eastern Time, or about 23:00 Japan Time. Interested fans can watch it at this link or via Nintendo’s official YouTube channel. Residents of the UK will have to either tune into a different broadcast or wait a while to see the show: Nintendo UK confirmed that out of respect for the period of national mourning prompted by the recent death of Queen Elizabeth II, it will not be livestreaming the Nintendo Direct. Instead, it will be published as a video-on-demand on the Nintendo UK YouTube channel at 16:00 UK time.

According to Nintendo, the Direct will run for about 40 minutes and focus on Switch games launching “this Winter”. Many anticipated Switch releases like Pokémon Scarlet and Violet and Bayonetta 3 have release dates that technically put them before Winter (typically beginning in mid-December to March of the next year). Depending on how generously Nintendo chooses to interpret Winter’s timing, this could mean new details for games like Witch on the Holy Night or release dates for games with unconfirmed launch windows. Those titles include the likes of Disney Speedstorm, Disney Illusion Island, Eiyuden Chronicle: Hundred Heroes, or others. Even delayed titles like Advance Wars 1+2 Re-Boot Camp might finally get a date.

There’s also the specter of something new potentially coming via the next Nintendo Direct. Rumors surfaced by reporters Mike Minotti of GamesBeat and Jeff Grubb of Giant Bomb suggest that The Legend of Zelda-related titles could see an update, such as Switch ports of Twilight Princess and Wind Waker.