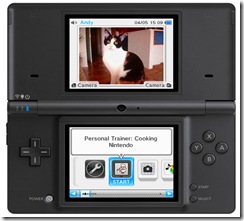 Nintendo is returning to where the Wii launched for another kick off party. This Saturday, April 4, from 9PM – 12 AM the Gamestop at Universal Studios’ Citywalk will be the home of a Nintendo sponsored DSi event.

At the midnight party attendees will have a chance to win art from I Am 8-Bit, listen to music from VJ Fader with video projected on a globe, watch parkour stunt performances, and test the system on interactive gaming stations. Will Nintendo break out the Segwiis again?

When the clock strikes midnight Cammie Dunaway and Attack of the Show host, Kevin Periera, will open Gamestop’s doors for a horde of gamers to purchase DSis. The event sounds about the same size as Nintendo of America’s Wii launch party and it’s way bigger than the DS Lite party in New York. Events like this makes it clear that Nintendo considers the DSi more than an upgrade, it’s getting the roll out the red carpet for a new system treatment.