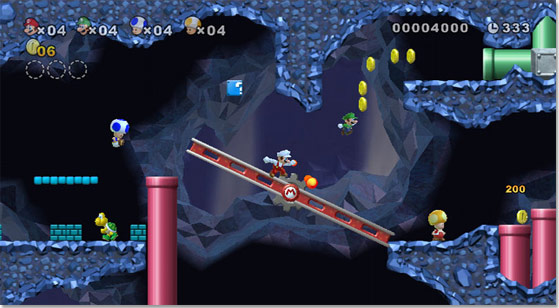 It’s that time of the year again, financial report time! Nintendo’s statement for the fiscal year gone by is out, and gives one a better idea of how the company performed this past one year. Before we dive into the fiscal 2010 results, however, let’s revisit the April – December report for comparison purposes.

The following was Nintendo’s sales forecast for DS and Wii hardware for the fiscal year ending in March 2010, at the end of their previous quarter:

So, did they make their predicted numbers? Yes and no. While Wii hardware sales slightly exceeded expectations at 20.53 million units, DS hardware only sold about 27.11 million units, despite the launch of the DSi XL.

And here are the software sales forecasts the company made for the same period:

In this instance, while DS software exceeded the forecast at 151.59 million units, Wii software lagged ever so slightly at 191.81 units. For the most part, though, both predictions, made back in December 2009, were solid.

For the fiscal year ahead, Nintendo’s current forecast is as follows:

It’s worth noting that the DS hardware number is rather generous. The financial statement confirms that it includes Nintendo 3DS sales, whenever the device launches.

Nintendo’s net income — commonly known as the "bottom line" — across the company was down year-on-year by 18.1%. Where in fiscal year ‘09 net income amounted to 279,089 million yen, the same figure in fiscal year 2010 was 228,635 million yen ($2.5 billion). Reasons cited for the drop in net income include the usual culprits: a hardware price cut on the Wii, fewer strong titles in the first half of the fiscal year, and appreciation of the yen.

Over the course of the next year, Nintendo presently expect this figure to drop further by 12.5%, forecasting a net income of 200,000 million yen by March 2011. In all likelihood, this figure will be revised in the coming months, as the company makes changes to its product line-up. Also worth noting is that Nintendo’s employee-count increased by 295 people between March 2009 and March 2010.

Touching upon products that are already out in the market, worldwide sales figures for select games were provided as follows:

For sales of the same titles up until December for comparison purposes, one may refer to our Apr – Dec report. Nintendo point out that the number of million-seller titles has increased from 54 at the end of FY09 to 79 at present.

Putting it in Perspective

While the drop in net income and forecast for the year ahead makes it sound like there’s not much more than gloom and doom in store for Nintendo, the truth of the matter is that the company continues to be in an enviable position, compared to its competitors.

Fiscal year  sales of the DS in North America (amounting to 12.29 million units) broke the annual hardware sales record in the region. The DS is presently at 128.89 million units worldwide, taking into account the sales of the different models. Meanwhile, the Wii is at 70.93 million units worldwide, and is the single best-selling console in the company’s history. Forecasts for both systems going forward — mentioned earlier in our report — remain optimistic, and on the Wii in particular, are fueled by a promising product line-up for the remainder of the year.

With a significant upgrade to the DS family, new Pokémon titles and the mysterious Vitality Sensor also set to launch this year, Nintendo are, at the very least, reasonably well-positioned for the fiscal year ahead.