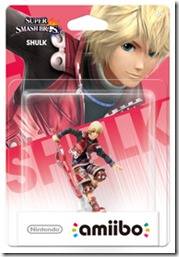 When Nintendo announced their third wave of Amiibo figurines yesterday, they mentioned that certain figurines would be exclusive to certain retailers. Xenoblade’s Shulk, it seems, is exclusive to GameStop.

GameStop’s online store lists Shulk as an exclusive item to their chain. Since Xenoblade itself was released exclusively via GameStop, this makes sense in some strange way.

Shulk, like other Amiibos, costs $12.99 and will be available in February.