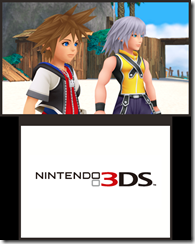 A dozen or so tweets earlier, Nomura said he was going to Osaka on Friday for a meeting and the topic was Kingdom Hearts 3DS. Nomura is back in Tokyo and said he spent all of yesterday in a conference room discussing KH3D.

At E3, Nomura said to Siliconera that Square Enix’s Osaka studio would “probably” develop Kingdom Hearts 3DS. It appears the same team that completed Kingdom Hearts: Birth by Sleep got the job.