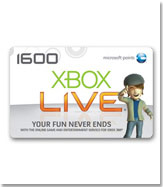 During the period of January – April 2010, where all other segments of game revenue were down compared to the same period in 2009, accessory sales were up by 2%. While that may not seem like much, it’s a welcome statistic alongside the 20% decline in hardware sales.

To what can we attribute this growth? Xbox Live 1600 point game cards, according to the NPD group, which were the best-selling accessory during both March and April.