After Viewtiful Joe, Capcom’s Clover Studio embarked on more creative and ambitious follow up project. Instead of making a generic action game or another RPG, Okami is in genre all of its own. Also instead of being another emo hero with spiked up hair you play as Amaterasu, a wolf with a magical paintbrush strapped to his back. The paintbrush is the key to Okami. Using it you will be able to call upon the power of the sun, attack enemies and bring life back to the village. 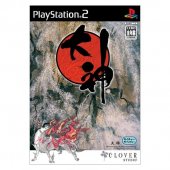 The story of Okami begins in the past where an eight headed beast terrorized a village. This monster was manipulated by Orochi, an evil deity, until a snow white wolf and a lone swordsman worked together to quell Orichi. For a time the village was peaceful, but one hundred years later Orochi has returned. Now the sun god, who is reincarnated as the wolf Amaterasu, sets off to stop Orochi.

When you start Okami out you don’t have use of all of Amaterasu no okami’s powers. Instead you will have to rely on his natural wolf abilities. You can dig when you press triangle, bark by pressing circle and dash around the screen. Amaterasu increases his speed as he continues to run, which makes traveling the vast areas a breeze. Since you are a wolf you won’t be able to pick objects up using an opposable thumb. Instead Amaterasu will need to push objects with his head or carry things with his teeth. Besides his paintbrush Amaterasu feels like a real wolf.

But it’s the paintbrush that defines Okami as a game. When ever you press R1 all the action freezes and the screen changes to a tattered scroll. Now you can draw on the screen by holding down the square button and dragging the analog stick. If you draw a short horizontal line you can slash a wooden fence so Amaterasu can pass through. Or draw a circle in the sky to call upon the power of the sun. The sun power can be used to for complex tasks like making light shine on a crystal or to help an elderly villager dry her laundry. The brush can also be used to repair broken objects like a bridge so Amaterasu can continue his journey. Early on Amaterasu’s powers are limited by how many constellations he completes. As players progress through the game Amaterasu will be able to add stars to the sky and call down other deities who will bestow new paintbrush powers.

While traveling the world Amaterasu will be able to revive dead land by drawing a circle around old trees. When you do this you will be treated to a stellar scene of trees blooming or the grass growing. In fact every where Amaterasu goes a trail of flowers appear behind him and lily pads appear when Amaterasu swims. By restoring the world Amaterasu gains points that can be spent to increase his life bar or the amount of ink for his paintbrush. Orochi isn’t just going to stand by and let Amaterasu paint away. As you’re wandering around you will encounter floating green seals. If Amaterasu touches one of these the game will shift into combat mode. A wall of kanji and color will prevent Amaterasu from running away and create a small arena to fight in. In battle you can attack by pressing the square button to swing the brush as a weapon. Or you can use the powers of the brush to attack. If you draw a horizontal slash line you can instantly finish an enemy off. Or draw a bomb for a wide area attack. While Amaterasu has a fair amount of options, the enemies will react defensively if you don’t switch up your tactics. By turning into stone an enemy can defend itself against brush attacks. Even though enemies react, fights are fairly easy. You don’t need to worry about stringing together long combos and Amaterasu is nimble enough to dodge attacks.

Okami’s experience is heightened by its unique style. Once again Clover Studio uses cel shading, but instead of trying to create a living cartoon Okami is designed as a living painting. It’s easy to spend time looking around at the world and admiring the watercolor world. What is really amazing is when Amaterasu uses his powers to bring back an area back to life. Bare trees grow leaves, the ground sprouts green grass and flowers bloom. Okami tilts the argument that games can be art. The soundtrack is good too. During battles the game picks up a taiko style beat and when walking around the tune changes to somber atmospheric music. Instead of giving the game voiceovers Okami uses simish speak. Whether Clover Studio chose this to show players how a wolf would hear a human talk or because it was cheaper to do than actual voiceovers it works well in the game.

It is easy for a company to pick up a movie license or develop another sequel, but to imagine a game like Okami is uncommon. Taking an original concept and polishing it is rare. Now when the final product is easy to learn and fun to play the game is a sure fire hit. Okami has all of these qualities and is a game not to be missed.

Some solutions in Okami like drawing slash lines to break a rock are intuitive. However, many times Okami requires players to talk to NPCs multiple times and to understand what objectives they are talking about. On the plus side there is furigana to help decipher kanji, but the game is complex enough to give importers a headache.

Capcom has Okami scheduled for a fall 2006 release.

+ Pros: A striking visual style that’s like a living painting and best of all fresh gameplay.

– Cons: Besides using the paintbrush in battle combat can be a little shallow and the goals are spelled out for players.

Overall: It’s hard not to love Okami. Clover Studio managed make Amaterasu feel like a wolf and the way they blended in the magical brush is nearly perfect. Because of its innovation and easy to learn controls Okami will appeal to a wide spectrum of gamers.