I don’t know how people can do multiple days of convention. One day of E3 was enough for me. It must take a lot of stamina to work the booths for so many days straight. 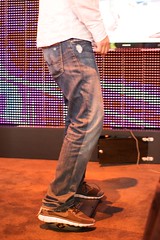 I checked out the new skate board peripheral for Tony Hawk Ride. It seemed to work better than I thought it would. You can lean on it as you would a skateboard (I guess — I’ve never really skateboarded before) to do turns and you can jump on top of it to do tricks in the video game. Seemed fun. I wonder how well it would work on hardwood. I bet the downstairs neighbors wouldn’t be too happy about it.

I’m glad to see more physical game peripherals being out in the market now. Makes being a gamer more active and less couch potato-like.

I also had a go with the PSP Go, which I was lukewarm on when I first heard the news. When I held it in my hand, I was a little swayed. It’s definitely less wide, and it feels more solid. I’m not sure about the button placements though. The L and R trigger felt awkward, but maybe it’s because the device was tied down. It felt like my hand would get tired if I had to keep my fingers on the L/R trigger for too long. I definitely like the fact that it slides into a more compact shape — very pocket-friendly. If I didn’t already have a PSP slim, I would definitely get the PSP Go. 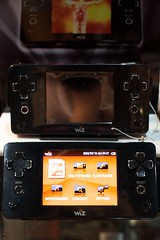 I saw another hand held console called the Wiz (cue Idle Thumbs music: The Wizaaaaard). It’s made by a Korean company and is about the same size, maybe a little wider, than an iPhone. It’s light, but feels solid. So far, not too many games on it, but it’s certainly home-brew friendly. According to the developer I talked to, they might come out with an SDK for the system so that more developers can contribute to the software. It’s definitely not something the main stream is likely to want anytime soon, but good for those who like to tinker in homebrew.

Dead Space Extraction was also out on the floor this year and I got some hands-on time with it. I thought a light gun game would feel dated and boring, but this one gave me a surprise. It feels like the original Dead Space complete with strategic dismemberment of enemies, except in light-gun format. It doesn’t feel as on-rails as other games of that genre are, maybe because sometimes players do get limited control of which direction they want to look at. My co-op partner did make the experience more exciting, especially during the puzzles where both of us needed to work together to make things like elevators work. Picking up ammo and weapons littered throughout the stage also kept the light-gun parts less monotonous.

New Super Mario Brothers on the Wii was news to me this week and I didn’t know anything about it until today. I wasn’t that excited for another Mario platformer, as good as they may be, but the 4 player co-op changed my mind in half a second. This is EXACTLY what I wanted as a kid while playing Super Mario Brothers. Playing it for a few minutes on the showroom floor has changed this into a must-buy. I can already tell it’s going to be a blast playing this with friends.

I also got to check out the iPhone and Wiiware version of Robocalypse. The iPhone verison is a port of the original DS game, an RTS, but with upgraded graphics. The robots look spectacular on the higher res iPhone screen. Scrolling around the map quickly was also smooth and seamless. The controls were also fine-tuned for the iPhone and intuitive. Can’t wait to see more of this game. It feels like full fledged RTS game.

The Wiiware version of Robocalypse is completely new and instead of an RTS, it’s a tower defense game. From what I played of it, it’s a solid entry into the genre. Instead of a fixed path, like Defense Grid or the Final Fantasy tower defense game, players get a wide open field and can place towers anywhere to force enemies to make their own paths. More difficult, but also more rewarding. In addition to the traditional towers, players also get a hero to control, which acts like a movable tower. I mainly used him to force enemies to take a certain path. I like that towers have multiple types of upgrades like range, power, and frequency of firing. It’s good to see the twists companies come up with for tower defense games.