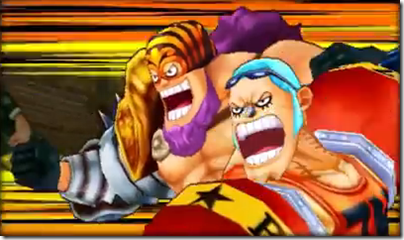 In Bandai Namco’s previous trailer for One Piece: Super Grand Battle! X, we got to see a couple legendary pirates in Portgas D. Ace and Edward “Whitebeard” Newgate. The latest trailer shows some heavy and powerful characters in action.

The characters that appear this time around are: Emporia Ivankov, Franky, Pica, Oars, Jesus Burgess, and the main antagonist of One Piece Film: Z, “Black Arm” Zephyr.

The trailer starts out with a battle of the flashy powerhouses in Ivankov and Franky, followed by Z going against Burgess of the Blackbeard Pirates. Interestingly, they’re fighting at the Corrida Colosseum stage, and it looks like Ucy the Fighting Bull is also part of it as some sort of stage gimmick.

After Z pulls off a special attack, Oars shows up from the side to knock him out. Pica, one of the three executives of the Donquixote Pirates, also shows up from the other side using his Ishi Ishi no Mi ability to land a big hit.

While Burgess took a beating from Z earlier, he gets revenge at the 1:19 mark, where we get to see what he’s capable of doing. He can perform combos with multiple grabs thrown into the mix, so it looks like you wouldn’t want to stay too close while fighting him.

Finally, at 1:50 we get to see the part we’ve all been waiting for—some awesome robot action from the Franky Shogun. This super special basically lets him drop down on enemies to inflict massive damage.

One Piece: Super Grand Battle! X will release in Japan on November 13, 2014 for Nintendo 3DS.