Practically everyone who had a Nintendo Entertainment System is familiar with Contra. One of the premier two-player games for the console, Contra let two players take control over Rambo-style commandoes Bill and Lance as they infiltrate an alien fortress in the jungle and proceed to destroy everything in sight. It has long been regarded as the father of side-scrolling shooters, having inspired other popular games like SNK’s Metal Slug. While there have been several sequels recently – including the outstanding Shattered Soldier and the decent Neo Contra – none of them have really captured the fast-paced simplicity of the original. 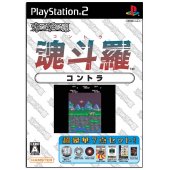 Unlike Capcom and Midway, who’ve been releasing a steady stream of arcade compilations,  Konami has ignored a huge number of their older titles, requiring that gamers either turn to import-only compilation discs for the 32-bit systems or stick with MAME. They’re beginning to change their tune, however, and let budget publisher Hamster bring a few of its older titles to the Playstation 2 under the Oretachi Game Center Zoku line. These feature a single arcade game, along with some bonus material to flesh out the package so the 2000 yen price tag seems more palatable. Most of the games in the series have been pretty old (such as Scramble and Time Pilot), but Contra is a bit more recent, having been published in 1987.

The gameplay is pretty standard – run forward, shoot, and try to dodge enemy bullets. Although most of the levels are side-scrolling, there’s one vertical level as you scale a waterfall, and two pseudo 3D levels where the camera has been moved behind the player. In addition to your standard rifle, you can find machine guns, spread guns, flamethrowers and laser shots. As can be expected, Contra is quite difficult, although you can adjust the number of lives, as well as the difficulty. You can also continue right where you left off, although you can only continue a few times before you need to start from scratch.

The version of Contra provided here is the arcade version, which may be a bit jarring for those used to the 16-color visuals of the NES game. The graphics are much better, although they have a washed tone compared to the relatively bright colors of the NES version. The music is also all FM synthesized, even though all of the melodies are the same. But while the gameplay is mostly identical, the levels in the arcade version are much, much shorter – most of them are seldom more than a few screens long. Most of the bosses also take far less damage, making the encounters feel less significant. And furthermore, the ending is almost completely worthless, as it consists of the staff members with little pixellated portraits of themselves. The NES ending wasn’t anything brilliant, but at least it was somewhat gratifying.

The thing is, even though many NES ports took a graphical hit when converted to the home console, many publishers ended up retooling the game to better fit the market. In Konami’s case, with games like Life Force and Contra, it usually meant adding in extra levels and features. As a result, even though the arcade game might look more impressive, the NES version has a greater scale and better difficulty balance.

The arcade Contra also has another bizarre oddity – it was designed for use with a vertical monitor. A huge upper portion of the screen is taken up by a status bar, with the rest of the playing field in inhabiting the narrow bottom portion. The PS2 version lets you adjust the zoom to your liking, but unless you activate the tate mode and turn your TV sideways, the action is going to be letterboxed. This makes sense for vertical shooters, but given that a majority of Contra scrolls horizontally, it creates an odd, cramped feeling through most of the game.

The Playstation 2 port is also pretty bare bones. The game disc is pretty much just an emulator and a ROM shoveled onto a CD, complete with the ugly, unskippable boot-up sequence. Other than the zoom and screen orientation options, there’s no way to change the filter, which may bug those who want perfect visual clarity. There’s no progressive scan mode either.  Some of the heavier moments have quite a bit of slowdown, although that was most likely in the original arcade game.

But one of the biggest appeals of the Oretachi Game Center series lies with the packaging. Included in the set is a soundtrack mini CD, a video mini-DVD, a small guidebook and a collectable card. This may sound like a lot, but it’s still very cheap. The guidebook is useless and the bonus mini discs come in very flimsy cardboard packaging. The music CD contains all of the tracks from the game, plus a sound effects track and a bonus track containing some remixed music, which is merely a lame electronic medley of a few of the songs. The DVD is supposed to contain a Super Play video, which is meant to be a skilled player beating the game was efficiently as possible. Instead, the video here shows a rather amateurish player who gets killed pretty often, and doesn’t even show the whole game. The rest of the disc is filled with advertisements for the other Oretachi Game Center games.

The whole game is in English, although the options menu is in simple Japanese.

None of the Oretachi discs have been released outside of Japan, so it’s highly unlikely, unless someone bundled them together into a single release. However, Konami is scheduled to bring out the arcade version of Contra on the Xbox Live Arcade later this year.

+ Pros: The original arcade version of Contra has the run, dodge shoot gameplay you would expect from the series.

– Cons: A barebones port that looks squished since Contra was designed for a vertical monitor.

Overall: Considering that many Western gamers can get full compilations of arcade games for $20, spending $25 on a single game is a bit ridiculous. While Contra is still a pretty fun game, it ultimately pales compared to the NES version, and the bonus packaging is pretty worthless. Only recommended for the hardcore collectors.