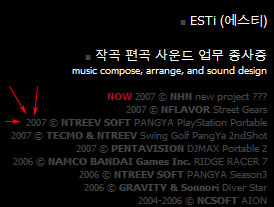 ESTI is a Korean composer whose work is found in DJ Max Portable, Ridge Racer 7 and Super Swing Golf Pangya. While checking out ESTI’s official site Zach M. spotted an interesting addition, “2007 © NTREEV SOFT PANGYA PlayStation Portable”, and sent over a tip (thanks!!).

I haven’t heard anything official about a Playstation Portable version of Pangya and this could be a mistake. However, it wouldn’t surprise me if this is real either. Ntreev Soft is working with the PSP (remember the sequel to Astonishia Story?) and they are original developers of the Pangya franchise. It’s a logical move for the company to publish Pangya on the PSP in, at the very least, Korea.