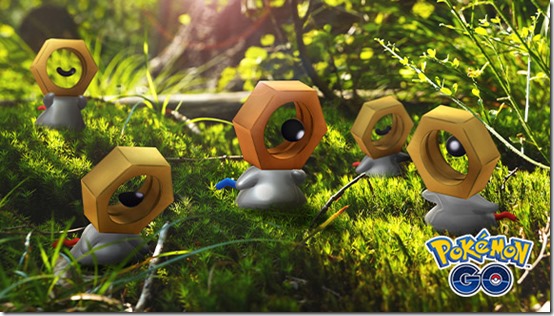 Shiny Meltan has been revealed. The official Pokemon website has revealed that people can now have a chance of finding a Shiny Meltan in Pokemon GO Mystery Boxes until March 4, 2019. Since the details distinguishing this variant are rather minor, people will need to pay close attention.

There are two ways to tell a standard Meltan from a shiny one. The nut that makes up the character’s head is normally a yellow color, but this variant’s is darker, looking almost a little orange. Also, the little power cable tail is blue on this version, rather than red. The silver metallic body and black eye both remain the same color. (As a means of reassurance, shiny Meltan can be transferred over to Pokemon: Let’s Go, Pikachu! and Eevee!.)

During the Shiny Meltan event period, people will be able to open Mystery Boxes, which you get from connecting to Pokemon: Let’s Go, Pikachu! or Eevee!, more frequently. While this does not guarantee you the special version of the new Pokemon, it will make it easier to get enough candies to evolve the character into Melmetal. (400 candies are needed to evolve.)

Pokemon GO is available for Android and Apple iOS devices.