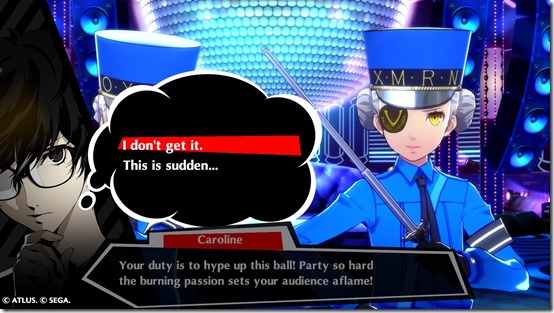 One of the things that define the Persona games is the ability to connect with the other characters. Building up social links by managing stats and making time for new friends enhances the game. Both Persona 3: Dancing in Moonlight and Persona 5: Dancing in Starlight have similar sort of vibe. While you won’t be spending time on in-game activities building up the protagonist’s stats, you are building up your actual rhythm game abilities to unlock special moments, extra cosmetic items, and the ability to enter characters’ rooms.

After finding yourselves in Persona 3: Dancing in Moonlight and Persona 5: Dancing in Starlight Velvet Rooms and being told by Elizabeth or Caroline and Justine that you are in a dream world where they would like you to dance, you get to take your first steps out on the dance floor. (Don’t worry about paying too much attention, as the stories aren’t pressing.) After completing your first or second song, you should get a message saying that a new social interaction is available to you. You can then head to the Social section to see which conversations with familiar characters are available there. 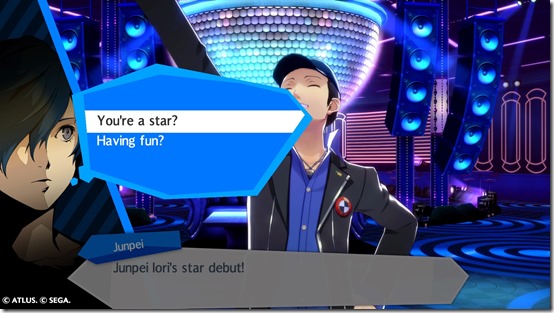 If you go into Persona 3: Dancing in Moonlight and Persona 5: Dancing in Starlight’s Social sections with the right expectations in mind, you’ll get more out of it. Going to each character’s Social page will initially show you their first five events and the unlocking criteria for them. For example, going to Yukari or Ann’s page initially will show her first event requires you to wear a customized outfit to complete a track, but subsequent events will require you to clear tracks 5, 12, 20, and 28 different costumes. (The events after that require 38, 50, and 70 costumes.) Think of it as being real-world grinding akin to in-game building. Especially since some characters require more effort, such as being skilled enough to complete Challenges to make time for Mitsuru and Morgana, accruing combos for Akihiko and Ryuji, and getting Brilliant rankings a certain number of times for Ken and Haru.

The Social conversations themselves are always light and fluffy. Think of it as being like Whose Line is it Anyway?, where everything’s made up and the points don’t matter. Relationships might be implied, as a character like Ann may show a slight romantic interest in the Persona 5 protagonist in a conversation and Junpei will note that he is in a relationship, but most of these interactions are designed to be more frivolous and revolve around what people suddenly summoned to a dream to dance might be thinking about. If you are looking for depth, you won’t find major revelations, but people who do like specific characters may find themselves enjoying a chance to speak with them again. You can choose different responses to questions, but there are no wrong answers. No matter what actions you take, you will always get accessories, costumes, sound effects, and custom options. 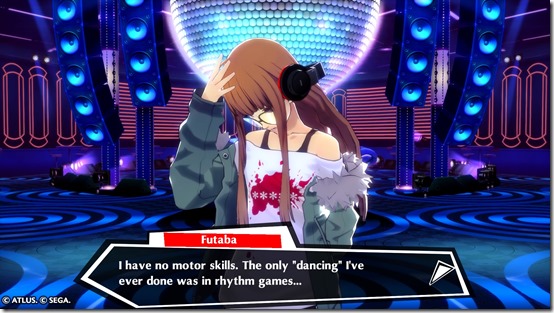 Getting the rank six through eight events for Persona 3: Dancing in Moonlight and Persona 5: Dancing in Starlight characters pay homage to the idea of maxing out relationships by allowing you in people’s rooms. These let you explore rooms, learn about different things within, and find cards left behind by the Velvet Room attendants to get costumes and accessories. Basically, it rewards you for taking the time to play the game and talk to characters by giving you a chance to pay even closer attention to these people.

The Persona 3: Dancing in Moonlight and Persona 5: Dancing in Starlight Social elements can often feel like they are trying to pay tribute to the actual Social Links in the original games. They offer rewards that definitely make them worth earning and viewing. Each even has the illusion of choice, which might cause someone to feel like they are influencing a relationship. They offer a chance to spend time with virtual friends, which is probably one of the reasons people might pick up Persona 3: Dancing in Moonlight or Persona 5: Dancing in Starlight in the first place.

Persona 3: Dancing in Moonlight and Persona 5: Dancing in Starlight will come to the PlayStation 4 and PlayStation Vita outside of Japan on December 4, 2018. They are immediately available in Japan.