So I’m sitting in a ramen shop with my schoolmate, some kid named Kenji. I’m a new transfer student, so I need all of the friends I can get. The funky background music seems like it could’ve been ripped straight out of Jet Set Radio – a few of the voice samples are exactly the same.

My friend turns to me and asks, “Have you ever been in Yukari-chan’s room?” Yukari is my dormmate. When night comes, we band together and fight for the future of mankind. But for now, she’s just a friend. Kenji, here, he just wants to use me to get into her pants. If I want, I can answer “None of your business” and tick him off. That’s not something I’m going to want to do though – Persona 3 is all about building relationships. So I answer, “No, I haven’t.”

It’s not like I’m after Yukari anyway. I met a dark-skinned girl named Yuko. She’s the manager of the swim club. I only joined the swim club by accident – one day, after school, I wandered around randomly until I found a door that was open, and promptly joined. I asked her out a few times – she was standoff-ish at first, but eventually we went for some tea. Again, the more people I meet around school, the better. 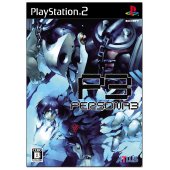 We finish off our ramen, and it’s too late to day to do anything else, so I head back to my dormitory. When I get back, I’m greeted by my fellow classmates, a guy named Junpei and the aforementioned Yukari. There’s another girl, who’s sitting quietly on the couch reading a book. So I walk up to her and talk to her. She has a cold sneer on her face, which is partially hidden by her dark purple hair. Her name is Mitsuru.

“What do you want?” she asks succinctly..

I think this over. I could head up to my room and study for a bit. I have three attributes – Academics, Courage, and Charm – and none of these will increase unless I devote myself to them. Studying increases Academics. Singing at the karaoke bar increases Courage. Dining at the restaurant increase Charm (how that works, I couldn’t tell you.) But I think I’m refined enough for now. Plus, I’m feeling pretty good – I dozed off in class, and made sure to take a leak during the schoolday, both of which better my condition.

Tartaros is a gigantic tower, essentially a variation on the usual mysterious dungeon. Every night, at midnight, there’s a phenomenon known as “Shadow Hour” (or simply “Darkness”, if you choose to go buy the English subtitle.) Time comes to standstill, and creepy things start to happen, the least of which is this gigantic tower that has suddenly sprouted up from beneath our school. (This should all sound familiar if you’ve seen the movie Dark City.) Everyone is oblivious during Shadow Hour – except for these kids in this dormitory, myself included. Furthermore, there’s a strange little child that shows up during my sleep and warns me that “the end is coming.” Naturally, something must be done.

Tartaros consists of hundreds and hundreds of randomly generated floors. Each time I visit and revisit, the layout will change. It kind of looks like a demonic school, completely with distorted floors and bleeding waterfalls.  The goal is simply to find the stairs to the next level, although I can scrounge around for treasure or fight some bad guys. Compared to many games of this type, Persona 3 is fairly forgiving. Many levels have a portal that takes my party straight down to the first level, in case I get into trouble. There’s also a transporter that unlock at certain levels and lets me skip over previously traversed floors. In general, it’s also a bit easier than your average Megaten game, given that there’s an easy mode that will let me continue up to ten times if my party gets offed.

Taking a note from the Grandia games, the random battles have been done away with, and all enemies are visible on the screen. Whacking them with my sword at the right moment will initiate combat to my advantage, but getting surprised will cause my whole party to lose a turn – and in the later stages, that can be quite deadly.

Combat begins with the usual swirl and a warbling female chorus chanting “baby baby baby” before the retro-style trumpet and Engrish rapping kicks in. The game uses a variation of the Press Turn system found in Shin Megami Tensei Nocturne and Digital Devil Saga – if I attack an enemy with their elemental weakness, they’ll be momentarily stunned, but the same will happen to my team if I’m not careful. If I can manage to knock down all of the enemies on the field, I can command my party to bum rush the helpless bad guys, resulting in a cartoonish pile-up that will devastate the enemies.

My elemental affinity, along with my spells, are determined by the Persona I have equipped. In the previous games in the series, your character would simply yell out “Persona!” and conjecture their hands, and a spirit would apparate and attack. Well, the kids in this game don’t quite have that luxury – we need to force the Personas out of their skull by taking a summoning gun to their head and pulling the trigger. The suicidal overtones are a bit creepy at first, especially given the disproportionate bodies of the characters, which makes the game feel like a twisted, emo version of Kingdom Hearts.

Unfortunately, I can only control myself during battles. The other party members – I can have four altogether – are controlled by the CPU. Although I can modify their tactics, it’s strange to put at such a distance between my friends, as the focus seems entirely on upgrading my own character. I can only access their status screen by talking to them, and even then, the interaction is limited to giving them new items or healing them. I can’t even change their Persona.

After each battle, there’s a chance that I can pick a bonus card. This is how I can obtain extra weapons or money, but it also allows myself to gain new Personas. Personas can be combined and evolved by visiting a place called the Velvet Room, a mainstay of the series. The relationships I form during the school day – dubbed the “Commu” system – will give bonus experience to certain Personas. This is how the life sim and dungeon crawling aspects all tie together.

After dungeon crawling for a bit, my party starts to get tired. There’s only so long that one can spend in the tower, which is annoyingly artificial barrier to continuing with the game. It doesn’t really matter too much though – certain floors can’t be reached until enough time has passed anyway. So we go home, I take a nap, and prepare for a week of exams. Maybe I should whittle the ways away playing MMORPGs? Or spending time at the cinema? Or do the smart thing and hit up the library? It’s hard balancing school life

Indeed, there isn’t anything quite like Persona 3 out in America – the closest is probably Konami’s underwhelming PSOne/Gameboy game Azure Dreams, which also combined various aspects of life/dating sims with RPG-style dungeon drawling. Persona 3 requires a different mindset than your typical JRPG, since it’s up to you to forge relationships, to balance out your school life, and decide when to explore the tower. This alone may be off putting to fans, especially those looking for an experience like the previous Persona games.

Regardless, Persona 3’s biggest issue stems from its inherent repetitiveness. The game takes place over a whole school year, and the passage of time dictates the flow of the story, rather than your actions. Even as you gain more party members, meet more people and obtain new Personas, you’re still seeing the same school hallway and same monotonous corridors of Tartaros over and over again.

Since the game is a menu based RPG and there is no English language option, gamers who can’t read Japanese may have problems playing an import copy.

Atlus has confirmed that Persona 3 will come in America sometime in 2007. They do not intend to censor any of the gun-to-the-head antics either.

– Cons: Extremely repetitive, no party member control in battle, and the life-sim/RPG combo may put off traditionalists

Overall: Your enjoyment of Persona 3 is directly proportional to how much effort you put into it. It’s possible to become fully immersed in this other life for hours on end. It’s also possible that the unchanging scenery will bore you to tears. Either way, it’s another excellent installment in one of Japan’s most venerable (and most original) RPG series.

Danganronpa News Will Come in Monthly Starting in May 2020

By Jenni Lada6 hours ago

Make a Nintendo Switch Pinball Cabinet With an Indie Peripheral

By Alistair Wong12 hours ago

By Alistair Wong13 hours ago