Ace Attorney: Dual Destinies’ Japanese release date is just around the corner, and Capcom have started a character introduction video series for the upcoming game. In the first edition of the series, scenario director Takeshi Yamazaki talks about the renowned defense attorney and main protagonist of the franchise, Phoenix Wright. 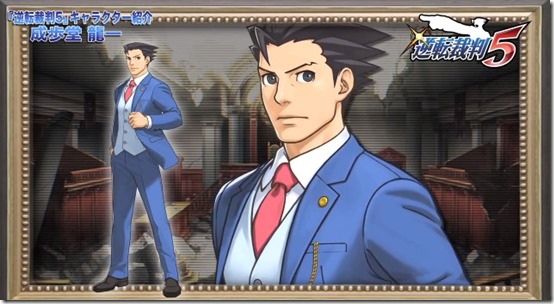 Phoenix Wright will be returning as a lawyer in Ace Attorney: Dual Destinies after an eight-year absence from the court. According to Yamazaki, Phoenix has been redesigned with a more mature look, which is accented by his new suit which includes a vest and gold chain to give him a more “adult” look.

For the first time, characters in Ace Attorney: Dual Destinies will show movements in 3D. The developers took Phoenix’s movements from the first three titles of the series, and did their best to reproduce them in 3D while keeping his original form intact.

The earlier titles’ 2D animated motions had a good tempo to go with sharp movements, according to the director, which was the most difficult part for them to translate into the latest installment.

Yamazaki also mentions that Phoenix Wright will be back to his usual self and turning hopeless cases around, but the reason he’s returning is in fact to keep a promise with someone who is dear to him, which we’ll be finding out in the game.