Even though the games were originally released for the Game Boy Advance, Capcom’s Phoenix Wright series found a home on the DS. The clever case twists and funny dialogue made it an instant cult hit. In North America the courtroom drama game flew off store shelves and until it was reprint Phoenix Wright was considered a rarity. Now the sequel Phoenix Wright Ace Attorney: Justice for All (Gyakuten Saiban 2) arrives in Japan on the DS. What more can the series do? 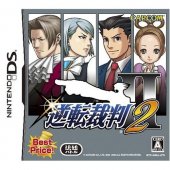 If you haven’t played Phoenix Wright Ace Attorney (Gyakuten Saiban: Mask Vision Case) you can still play Justice for All. The game starts out with Phoenix, a brilliant and crafty, defense attorney getting working on a case when he is struck on the head with a fire extinguisher. He gets a temporary case of amnesia, which makes a perfect opening for Maggey Byrd, his client, to explain the courtroom proceedings. Phoenix Wright is played out on a series of menus where you listen to testimony from witness and try to find contradictions in their story to prove their innocence. You can press them elaborate on their statement and present evidence to object to their testimony. By exposing holes in their stories Phoenix can prove his client’s innocence. It sounds easy, but Justice for All is going to bend your brain at times. Piecing the facts together is what makes the Phoenix Wright series so entertaining and there is a new way to do this.

While Phoenix Wright Ace Attorney: Justice for All is a courtroom game you also play detective to get the facts and evidence to prove your client is not guilty. You will walk around the scene of the crime and question spectators. In the first game you can simply ask them for more information, while in Justice for All the process is a little more difficult. In the second case you will be given Maya’s Magatama, a mystical curved bead that allows Phoenix to see psyche locks. When a person you’re speaking with can’t tell you the whole truth the background fades to black and a bunch of chains with locks appear around them. This prompts the player to present the Magatama and begin unlocking the psyche locks by presenting facts (evidence) or character profiles to make them speak. If Phoenix makes a mistake energy will be subtracted from his green life bar in the top right hand corner. If the life bar is empty Phoenix will have to breaking the psyche locks from the beginning. Most of the time when psyche locks appear you do not have all of the evidence or information to open them up. Players are going to have to proceed with caution because Phoenix’s life bar is carried over from the investigative portion to the court. This can be a problem if too many mistakes are made early on. Imagine entering the court with only half or less of a life bar, you’re not going to have much room for error.

There are four cases to play and they are more complicated than the cases found in the first game. You’re going to face off against a new prosecutor, Franziska Von Karma. If you’ve played the first game you probably recognize the Von Karma last name. Franziska is a ruthless child prodigy prosecutor who freely whips people in court and has a grudge to settle against Phoenix. But you won’t meet Franziska until you’re warmed up from the introductory case. The first case has Phoenix defend Maggey Byrd, the “goddess of bad luck” who is standing trial for the murder of her boyfriend Dustin Prince. In this case Phoenix will speak to a familiar face, Dick Gumshoe the bumbling detective in the first game and Richard Wellington a spoiled college dropout. The second case elaborates on the history of Phoenix’s mystical assistant Maya. She is in trouble again and stands trial for the murder of Dr. Grey, a controversial doctor who wants to restore the name of his hospital. Phoenix will travel to Kurain village to speak with Maya’s aunt Morgan and her little mystic cousin, Pearl. The third case takes place in a circus where Phoenix defends Maximillion Galactica, a flamboyant circus magician who is actually country bumpkin. For fans of the series there are some returning characters and plenty of tiny references to the first game fans will love.

Phoenix Wright Ace Attorney: Justice for All expands on the series instead of reinventing it. Because of this some of the same problems with the first title are also in Justice for All. One issue is replay value, which is next to none since you will already know the solution to each case. Another problem is you’re bound to replay a case because you couldn’t crack it the first time around. Since you can only restart at certain set points players might be frustrated with having to run through the same text more than once. Both of these issues come with the genre and they aren’t going to sway fans of the series from picking up Phoenix Wright: Justice for All anyway. Notice that we covered Gyakuten Saiban 2, the Japanese version, which contains an English option. There was some debate if this translation was rushed to make the Japanese release, but I haven’t seen any major problems with it. The English version isn’t full of broken English, but there are some typos in the script. It is unclear if the North American release will fix these up or if they will be using the same version as the Japanese game.

Gyakuten Saiban 2 has a built the North American release built into the game, just select English (the second option) when the game boots up to play it in English.

+ Pros: More investigating via psyche locks and more difficult cases makes Phoenix Wright Ace Attorney: Justice for All more of what you love about the series.

– Cons: Like the original there is little replay value since the game is extremely linear.

Overall: Phoenix Wright Ace Attorney: Justice for All (Gyakuten Saiban 2) might not be as original as the first title in the series, but it expands on what is good in the Phoenix Wright series for a new game. Deeper investigations, more complex cases, a cast of colorful characters and solid plot twists give little reason for gamers to object this.