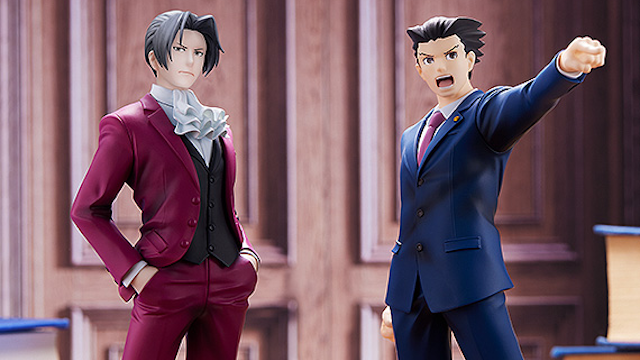 Phoenix Wright and Miles Edgeworth, the protagonist lawyer and rival prosecutor from Capcom’s Phoenix Wright: Ace Attorney, will receive Pop Up Parade figures. Good Smile Company has opened pre-orders for both figures on its North American and international web stores.

The Pop Up Parade figures will depict both Phoenix Wright and Miles Edgeworth on a smaller scale. Both of the immovable figures will have similar heights at approximately 17cm (~6.7 inches).

Good Smile Company will close pre-orders for both figures on September 28, 2022. It will ship the packages to Japan in February 2023 and North America in April 2023. While both figures have the same schedule, the company will sell them separately at $34.99 each.

The Pop Up Parade figures are not the first items Good Smile Company had produced for Ace Attorney characters. It previously revealed Nendoroids of Phoenix Wright and Miles Edgeworth. While the company closed pre-orders for these chibi movable figures in January 2022 and has already released them in Japan, it will ship them to North America in October 2022.

Phoenix Wright: Ace Attorney originally appeared for Game Boy Advance in Japan as Gyakuten Saiban in 2001. The English localization appeared for the first time on Nintendo DS in 2005. Capcom has since released the Phoenix Wright: Ace Attorney Trilogy which compiles the first game with Justice For All and Trials and Tribulations for all current-generation consoles, PCs, and mobile devices.