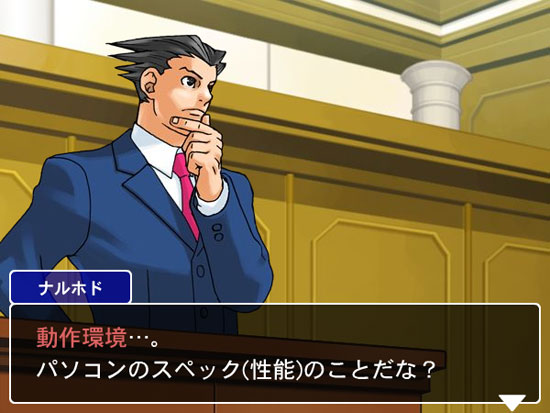 Daletto is helping Capcom port the three Game Boy Advance Gyakuten Saiban (Ace Attorney) games into downloadable PC games. Instead of selling each complete game PC Saiban will be broken into episodes. The first piece from Phoenix Wright: Ace Attorney goes live on March 18 and it’s free to download. Future episodes cost 120 yen each, which is not the price per turnabout. The four chapters dealing with Wright, Edgeworth and the DL-6 incident are split into 17 parts. Since you only have to pay for 16 the total cost for the PC version is 1,920 yen ($18.75).

On April 15 Gyakuten Saiban 2 goes through the episodic knife with Gyakuten Saiban 3 following it on May 13. Each of these contain over twenty pieces, but like the initial episode of PC Saiban players can taste the first piece for free.

Capcom USA has announced no plans to release a North American equivalent. However, I imagine an episodic version for the Wii or the Xbox 360 would sell pretty well. It might even draw new fans into the growing series.