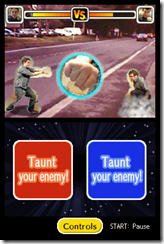 Users take photos of themselves in fighting poses and make sound effects to create a fighter in Photo Dojo. Once a profile is set, players can fight a friend using a single DS or throw wacky projectiles at a hundred computer controlled fighters in a battle royale.

While it isn’t a full blown fighting game, Photo Dojo is a fun toy to play with. Especially, when its free. Between today and until June 10, Photo Dojo won’t cost you a DSiWare point. Starting June 11, Photo Dojo will cost 200 DSiWare Points ($2).