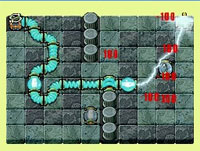 Empire Interactive, the company who is about to release Myst on the Nintendo DS in North America, has high hopes for their Pipe Mania revival. The series is probably better remembered as Pipe Dream, which Bullet Proof Software released on Nintendo consoles in the early 90’s. Sometime this year Pipe Dream is coming back under the moniker Pipe Mania (Empire Interactive’s original branding) to nearly every platform.

Six versions of the pipe connecting puzzle game are concurrently in development, which puts Pipe Mania on every active console except the PlayStation 3. Xbox 360 owners get an Xbox Live Arcade port. Pipe Mania is probably easy to transition to other consoles, but Empire Interactive is releasing an unusual amount of ports. The question is will anyone care about the impending Pipe Mania flood?