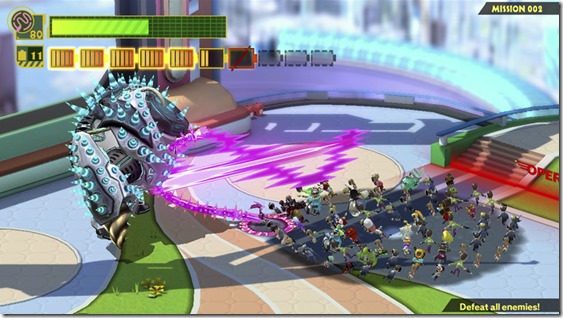 PlatinumGames have begun a series of blog posts introducing their next major title, The Wonderful 101, where you control a team of 100 superheroes at once. The game is slated for release on Wii U next month, and director Hideki Kamiya kicks off the blog with an introductory post, before handing  it over to another Platinum employee named Ichi to help explain the game’s setup.

“It’s been some time since I directed my last game, Bayonetta, and I’ve been busy upholding my name as Twitter Master in the meanwhile,” Kamiya writes. “However, it’s about time I unleashed a new game upon the world, so it looks like I’ll finally be able to regain my original title of Game Designer!”

He continues: “Anyway, since The Wonderful 101 is a completely new game, I’m sure most people out there still have no idea what it’s about, despite the fact that the release date is not too far away. Most people seem to be going, ‘Oh, that’s that game with the ridiculously large crowd of characters running around, right?’ or ‘Wait, is that the game where you play as a dog?’ or ‘Wonderful What? Never heard of it.’”

This is precisely why Platinum have started up a blog for the game, Kamiya says.

Meanwhile, in his own blog post, Ichi explains that The Wonderful 101’s story involves an alien invasion, and this is what you’ll be fending off during the game.

“As you travel through the wreckage the invasion has generated across each stage, you’ll need to save panicked citizens, overcome obstacles, take care of your enemies, meet up with additional forces, build up your unit, and prepare for a showdown with the stage’s boss,” says Ichi. “Along each stage there will be sudden developments that either uncover secrets between characters or a character’s past, or add more riddles to the equation.”

Controlling 100 heroes at the same time may not sound feasible, but Ichi says that it’s more fun than one thinks.

“During gameplay, you’ll choose a main character that your other heroes will closely huddle around,” he writes. “This means you don’t have to be worrying if anyone is lagging behind. Actually, once you experience how fun it is to be slinging your whole group at the enemy, you’ll probably have a hard time feeling satisfied controlling just one character in other games again.”