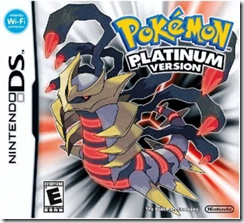 When it comes to the top 20 selling Nintendo DS games in Japan, Pokemon: Platinum ranks number one as the most pirated game on the chart.

According to CESA, the game (and Giratina) was illegally downloaded 2,071,006 times. A far cry from the five million plus Dissidia: Final Fantasy downloads, but over two million is still a hefty figure. CESA estimates losses of 9,469 million yen ($103 million). Of course, that number doesn’t take used game sales, trading, and people who would have passed on purchasing the game unless it snowed in Bowser’s Castle.

Top selling titles not targeted at core gamers were downloaded significantly less. Only 306,561 people downloaded the tenth game on the list, Tomodachi Collection. English Training, number 11, was downloaded 201,292 times. Now for a statistic that should lighten the mood, Common Sense Training was the 17th best selling Nintendo DS game, but the least pirated game on the list with only 89,667 downloads.