Pokémon X and Pokémon Y have a bug that appears to make the games’ controls unresponsive after saving in certain areas within Lumiose City. Nintendo say they’re aware of the situation, and that Game Freak are working on a patch that will be released “as soon as it is ready,” but in the meantime, they’ve pointed out what you can do to avoid the problem. Below is their full message, from their support site:

Thank you very much for playing and enjoying the Pokémon series.

An issue has been found with the Pokémon X and Pokémon Y games, released for Nintendo 3DS on October 12, 2013. After the player saves the game in certain areas and then reloads the save file, the controls may become unresponsive.

Please follow the instructions below in order to avoid this issue.

For players who are already experiencing this issue, please be aware that we are currently preparing an application to fix it, and will make it available to download from Nintendo eShop as soon as it is ready. We apologize for the inconvenience.

In some rare cases, if the player saves the game in certain areas of Lumiose City (see below map), then ends the game, the controls will not respond when the saved game is reloaded.

How to Avoid This

Please make sure you don’t save the game while in the areas marked on the map below (blue area). You can still save the game anywhere else in Lumiose City, including inside buildings such as Pokémon Centers. 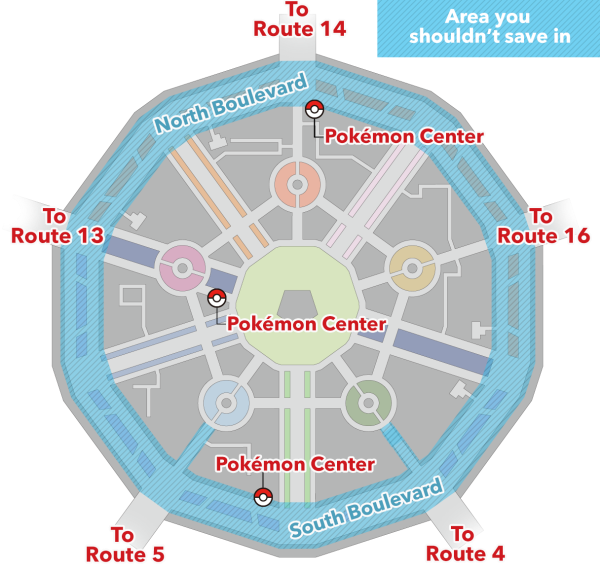 We are preparing an application to recover saved game data for players whom this has happened to. This will be made available to download from Nintendo eShop as soon as possible.

We apologize sincerely for any inconvenience and ask you to please keep an eye on our website over the coming days for the latest information and updates.

We’ll keep our eyes open for any announcements regarding when a patch will be released to address the bug. Meanwhile, it’s probably a good idea to make your friends aware of the issue. Considering the amount of players playing X and Y just this past week alone means that the bug is likely to pop up in quite a few games.

Ishaan Sahdev
Ishaan specializes in game design/sales analysis. He's the former managing editor of Siliconera and a contributing writer at GamesIndustry.biz. He also used to moonlight as a professional manga editor. These days, his day job has nothing to do with games, but the two inform each other nonetheless.

This Week in Sales: Granblue Fantasy Versus Takes to the Skies

The Nintendo 3DS Market Was Still Alive in 2019

This Week in Sales: Survival of the Ring Fittest