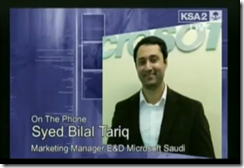 We know Project Natal will be in stores sometime this holiday season. Now, we have a more specific timeframe – October.

That’s according to Syed Bilal Tariq, Marketing Manager E&D of Micrsoft Saudi, who stated, “Project Natal will be launched in Saudi Arabia on the same time it will be launched in the world, that is going to be somewhere in October.” Tariq continued, “We will be in a position to confirm the date after E3, which is in June.”

Thanks for the tip Marcus!