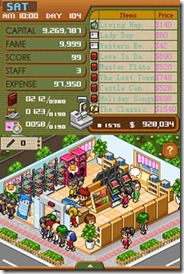 Circle Entertainment have a game on the Nintendo DSiWare service, titled Bookstore Dream. This is a simulation game that lets you manage your own bookstore. You deal with publishers, stock up on the most popular books, sell them to customers, and try to spread awareness of your store in the process.

A follow-up of sorts to this game is currently under development, and is titled Publisher Dream. This one’s more ambitious in that it involves the player running a videogame development studio. You manage different aspects of running a studio like income, what genres you work on, team sizes and so on, similar to the iOS title Game Dev Story.

The most interesting aspect of Publisher Dream, though, is that it’s based on Circle Entertainment’s own experiences.

“In this game, you play a role of the Triangle company, which sells game on the cShop,” Circle Entertainment CEO, Chris Chau, shared with Siliconera. “Every staff member in the game is real, and we also invited a few CEOs from other videogame developers to be part of it, such as Julio Moruno (Enjoy Up), Ivo Wubbels (Engine Software), Roderick Franklin (SDGT), Kou (FHW Japan), Peter Moraliyski (Moragami), and Hugo Smits (Goodbye galaxy games). They all get special abilities in the game.”

Game projects that your studio works on can be in different genres, and you’ll be able to choose what genre a project is in and the scope of the game as well. Smaller games can be completed quicker with relatively fewer staff members assigned to them. While you work on your titles, you’ll also need to manage your studio’s finances in Publisher Dream. Income for your studio comes in every 12 weeks—ie; at the end of every financial quarter—so you need to figure out a strategy to consistently have enough money on hand to last you until your studio receives its next payment.

So, where does the money go? The main costs come from paying your staff their salary and keeping the studio running. Just like real life, delaying the development of your game or not assigning your staff to projects during working hours will burn through your capital very quickly. Also, when you delay the development of a game, you’ll need to watch your staff’s stress level. One of the ways to help them release their stress is to allow for a break at the end of a project, instead of rushing them into another. You can also improve the office environment by implementing facilities like a coffee machine or adopting a cat.

As you go through the game, you’ll be given the opportunity to expand your studio, recruit more staff members, and develop more games at a time. Of course, this also means having to pay more developer salaries, which means keeping a close eye on your finances, lest you run out of them. 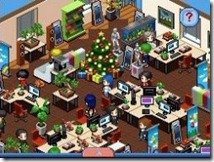 As your studio grows, more of Publisher Dream’s features will start to show themselves. Indie developers will begin to contact you to see if you’re interested in their proposals, and you’ll have a chance to invest in and publish their games. Additionally, you’ll also receive e-mail from people who have played your games. These can be both positive and negative. A few examples of these include:

I wish I could play more games from Triangle!

Congrats! Yet another boring waste of my time, your company has now been added to my blacklist!

Wow! It’s been quite a while since we’ve received any news from you guys, when can we expect a new title?

The goal, Chau says, is to express how fun and stressful game development can be. Circle Entertainment are currently in the process of finalizing the game, and expect another month or so of development time.