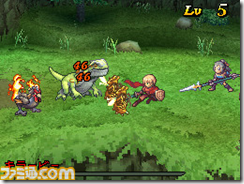 Atlus’ Nintendo DS game puts enemies and heroes on a three-by-three grid.  One row of squares separates the two sides. You can step in the middle ground to deal more damage, but that leaves the wandering character vulnerable since enemies can hit your hero harder too. Depending on the position of you characters some attacks can strike multiple enemies. It’s possible to combo attacks with allies for extra damage by playing with the turn order.

Famitsu also shared details about Radiant Historia’s story. The game takes place on a world with five warring countries. That isn’t the biggest problem. Desertification of the world is. A mysterious disease suddenly turns people into sand. Stock (Stok?), Rainie, and Marco are sent on a rescue mission to save a spy. The trio reach their target, but are surrounded by the enemy. Stock is critically wounded and wakes up in Historia, a world that looks like a M.C. Escher sketch. Children who live in this twisted world of time and space give Stock the power to play with time. Players will be able to visit the past, future, and parallel worlds with this ability.

By changing the past, Stok can prevent a future tragedy.

Radiant Historia is scheduled to come out on the Nintendo DS on November 4.