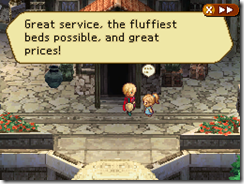 In Japan, Radiant Historia was released on November 3rd, 2010. The U.S. will see it on February 22nd, 2011. That’s a little over a three-month difference, which is rather impressive, given that the wait for role-playing games to be localized can potentially take anywhere between 6 months to a year.

Localization of Radiant Historia actually began in August 2010. Atlus USA had a large team assigned to the project, with as many as four different translators working on translating the game’s text alone.

The fine-tuning of Radiant Historia’s text in English was handled primarily by two editors, Nich Maragos and Scott Strichart, with two additional editors, Mike Meeker and Clayton Chan, handling some of the ancillary dialogue in the game, like that of NPCs. In addition to the text staff, were the QA team, led by Richard Rodrigues.

While editing, Nich and Scott alternated the game’s chapters between themselves. However, since several characters appeared in both their assigned chapters, there was a constant back-and-forth discussion to ensure that dialogue remained consistent throughout, as per the guidelines established by both.

Curious to know where the team drew inspiration for Radiant Historia’s localization? As lead editor, we posed that question to Nich, who revealed that the tone of the game’s dialogue was inspired by Greg Rucka’s Queen & Country comic series, as, like Radiant Historia, it is also a story about spies and infiltration.