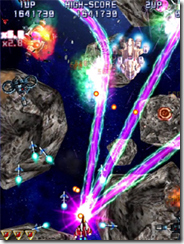 Beat Raiden Fighters Aces yet? UFO Interactive has you covered with another Xbox 360 shoot ’em up. Raiden IV is coming stateside this August.

Fantastic news, but not totally surprising since UFO Interactive released Raiden III outside of Japan and they said the would take care of Raiden IV. Moss published the game in last year with a replays, worldwide leaderboards, a collectable enemy gallery, and a boss rush mode. A few extra ships like the Mk-II and Fairy are available for purchase as downloadable content on the Xbox Live Marketplace.