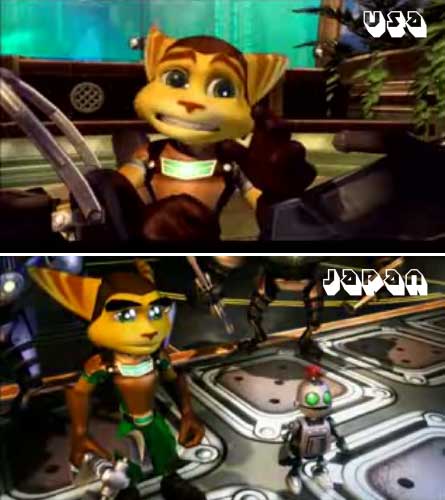 I knew something was off in the Japanese trailer for Ratchet & Clank Future and it’s the way Ratchet looks. In Japan, Sony coined Ratchet like a Disney character with big bushy eyebrows and a cheek to cheek grin. Most of the time Ratchet’s kid-friendly demeanor is restricted to the cover art, but not in the Playstation 3 game. Look at the difference between Ratchet… and Ratchet in the screenshot above. He has huge eyebrows and shiny anime eyes in the game! I'm not sure if this is a first or not since I haven’t played the Japanese Ratchet games, but it’s interesting to note how far Sony is going to make Ratchet appeal to Japan.