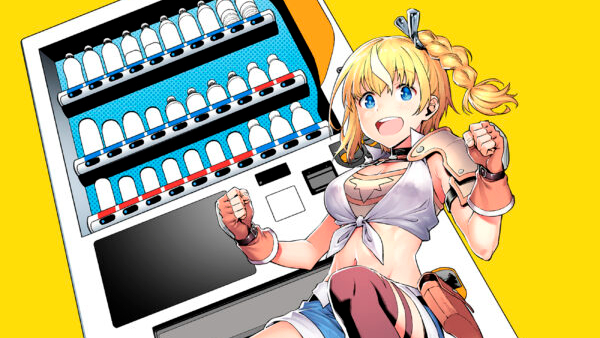 NEW SIMULPUB ANNOUNCEMENT: Reborn as a Vending Machine, Now I Wander the Dungeon

What happens when the world's biggest vending machine fan meets an unfortunate end..?

Reborn as a Vending Machine, Now I Wander the Dungeon, Ch. 1 is available now: https://t.co/UjaSdnvU3r pic.twitter.com/j6x8CvHw4p

Reborn as a Vending Machine follows the story of a vending machine otaku. He died in an accident and was reborn as — you guessed it — a vending machine. Unable to talk and limited to dispensing various drinks and foods, he is then picked up by a traveling adventurer with superhuman strength. It originally released as a light novel back in 2016. The series utilizes a more absurdist and comical take on the standard isekai premise.

The light novel series originally published in 2016. Yen Press acquired the license to the original light novel series back in 2017, publishing English versions of all three chapters. Later, monthly magazine Dengeki Daioh announced that it would debut a manga adaptation of the series on August 27, 2021. As the English version will publish simultaneously with the Japanese manga series in Dengeki Daioh, readers will likely get to see a new chapter released every month.

Yen Press also recently announced that it would release the English version of the popular Goblin Slayer tabletop RPG. It was previously only available in Japanese.

The first chapter of the Reborn as a Vending Machine, I Now Wander the Dungeon English manga is out now. It’s immediately available on comiXology for $2.99.