What do you do when you’re down, out, and apparently abandoned by your fiancé in Paris around the time of the French Revolution? Well, apparently you forsake your morals, stick your nose into other people’s business, then sell or use the gossip you acquire to alter the course of history. That’s the basic course of events in Ambition: A Minuet in Power. Though at times things might feel a bit unfortunate or unbalanced, especially since luck might factor into encounters.

Players follow a young woman summoned to Paris by her fiancé. Except after she arrives, she learns he’s angered powerful people and disappeared. His home is still there, complete with a maid, but you’ll have to find a means of paying your own way. Which turns out to be attending fancy events, making conversation to pick up gossip that is varying degrees of scandalous, and then selling it. Along the way, you’ll have opportunities to try and search for your fiancé, make connections with important people in the different factions, and shape the course of history. Provided you can remain credible and avoid peril. 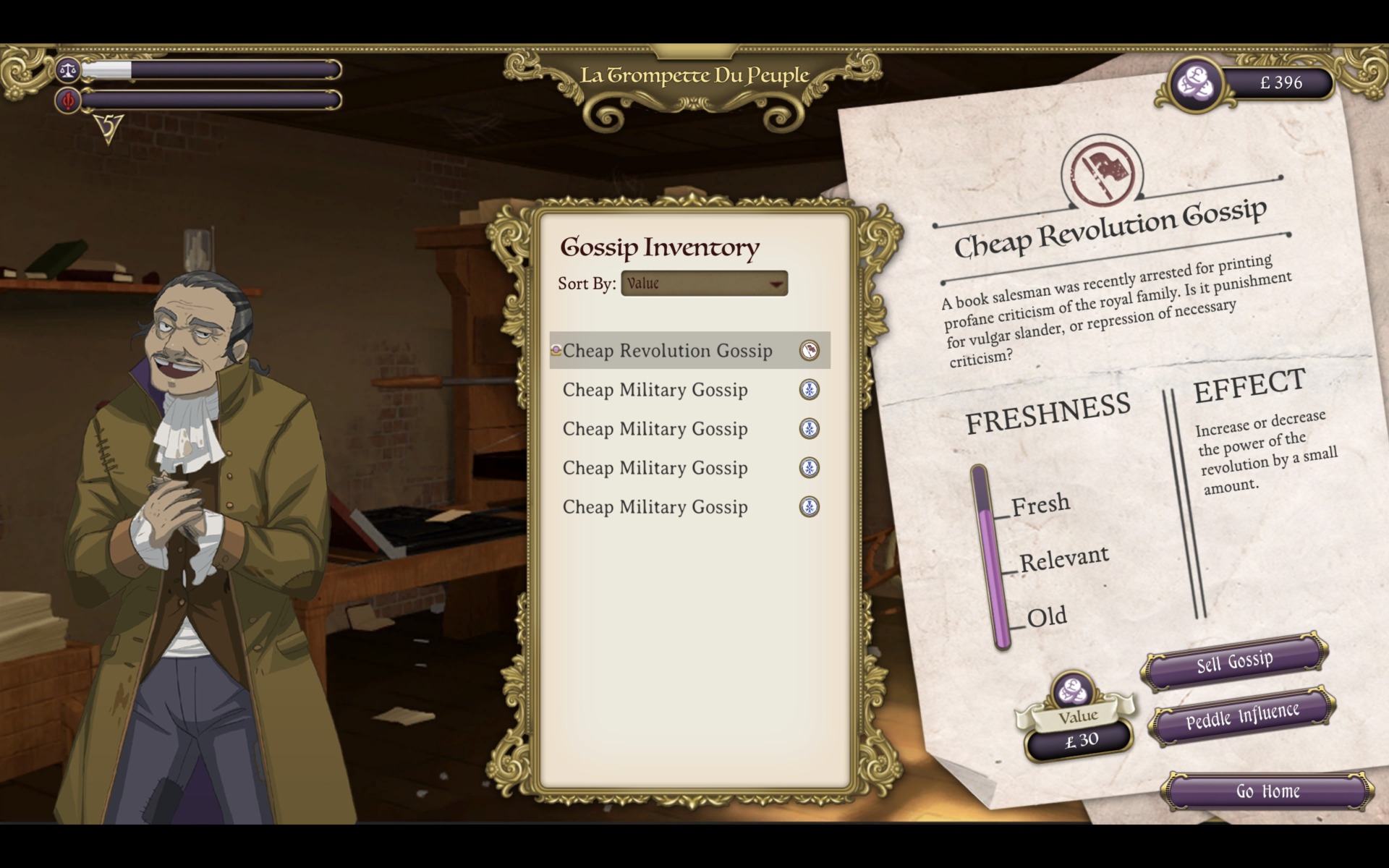 What follows is essentially a social management sim with some light visual novel elements. Each day begins with a look at a calendar. You’ll get invitations to events, where you can meet people, trigger meaningful situations, and find gossip. If you’ve met the right folks, you might be able to pursue objectives and find them on the map on off days. You’ll also need to make sure you take the time to sell your gossip (while it is fresh) or use it to influence the effect the bourgeois, church, crown, military, and revolutionaries have in the city. Also, you’ll need to buy dresses for yourself, because your credibility and status with different groups will be affected by what you wear. And, from time to time, you’ll need to rest as to not have exhaustion influence your performance.

When you get to an event or party, things tend to follow a certain pattern. When you get the invitation, you’ll have some idea about what sorts of gossip you’ll find there. This helps you determine if it is worth going. Once you arrive, you’ll get some sort of gossip for showing up. Typically, it isn’t great. (Still, it will likely sell for about 30 if fresh and, given your expenses are 45 when you start out, that alone means you’re set for the month.) You will then have two opportunities to talk to people. Before you choose conversations, you can see what kind of gossip will come from it, potential to increase or decrease your credibility and peril stats, if you might earn money, and if any relationships with notable people will be affected by it. Once you choose a conversation, you’ll often have to make choices to try and maneuver your way through to a good result. 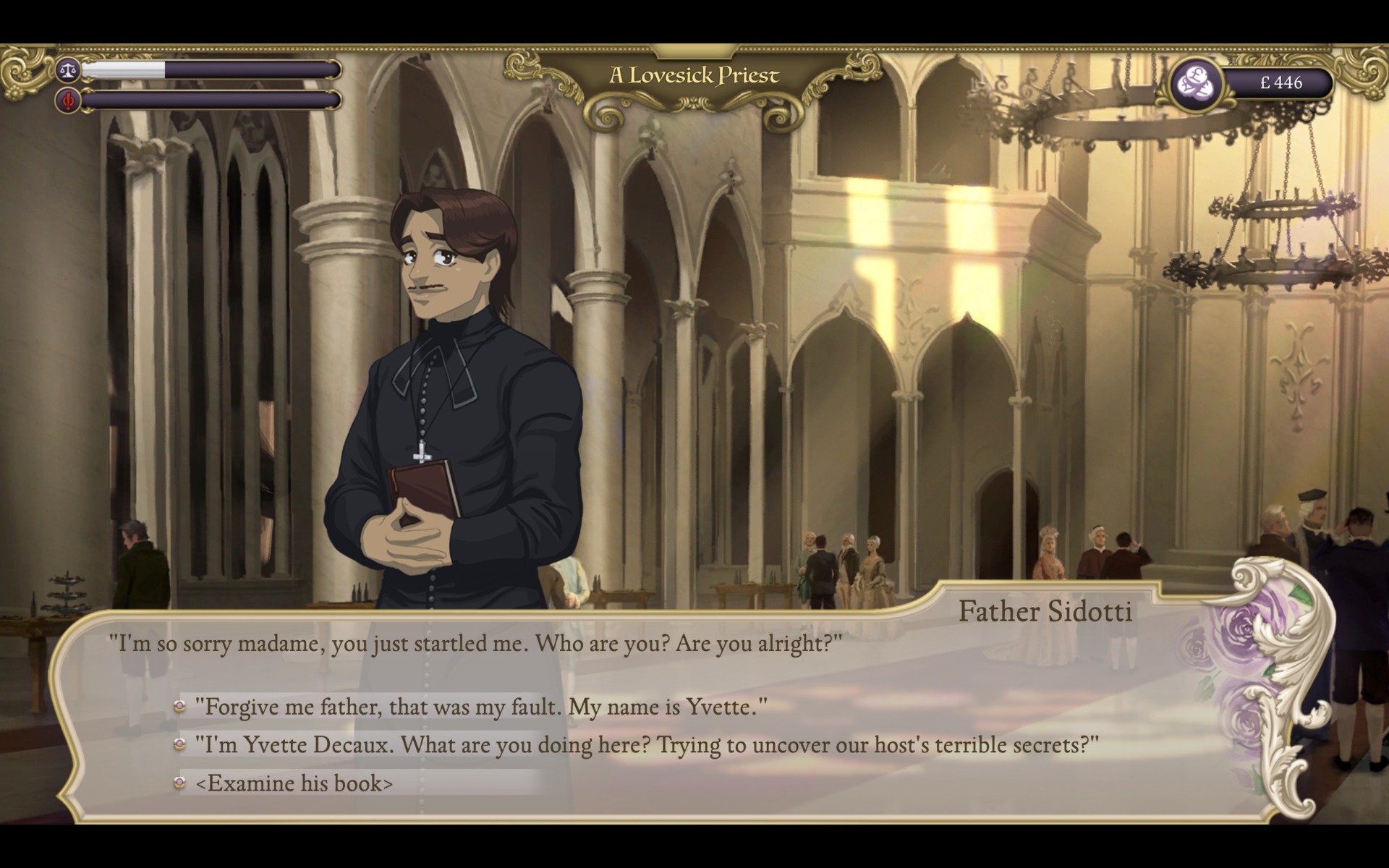 This is when Ambition: A Minuet in Power can feel more like you’re gaming the system then genuinely playing. Rather than each event having only unique interactions, even at your first few parties you’ll see the conversations you don’t pick returning if you didn’t select them yet. Also, since there aren’t actual stats you’re investing in besides the credibility and peril that are constantly in flux, success can feel like a game of chance. Saving before talking to anyone, then reloading if you “fail” a credibility check could mean you’ll then succeed the second time around, even if your credibility bar is less than half full. (Though there are some cases where if it isn’t high, you’ll seemingly always fail.) Peril is rather easily avoided as well. Perhaps it was an early issue, but it seems like balancing might be an issue.

This pops up somewhat frequently. While both credibility and peril seem ominous, the balancing and easy means of avoiding real consequences via save scumming meant I didn’t feel as though I was ever in any real jeopardy. Early dresses aren’t expensive, so I was able to have a rather robust wardrobe around the time I paid rent for the first time. While selling some gossip can involve a certain risk of people realizing my character was the one who leaked it, the hit to credibility never seemed like it was too much of a deterrent. The only thing that really ever got to me was not being able to clearly assess exactly how exhausted I was. Which meant I wasn’t quite sure how often I should be resting. (Even then, so long as you don’t overextend yourself, managing “story” quests and frivolous events aren’t too difficult.) 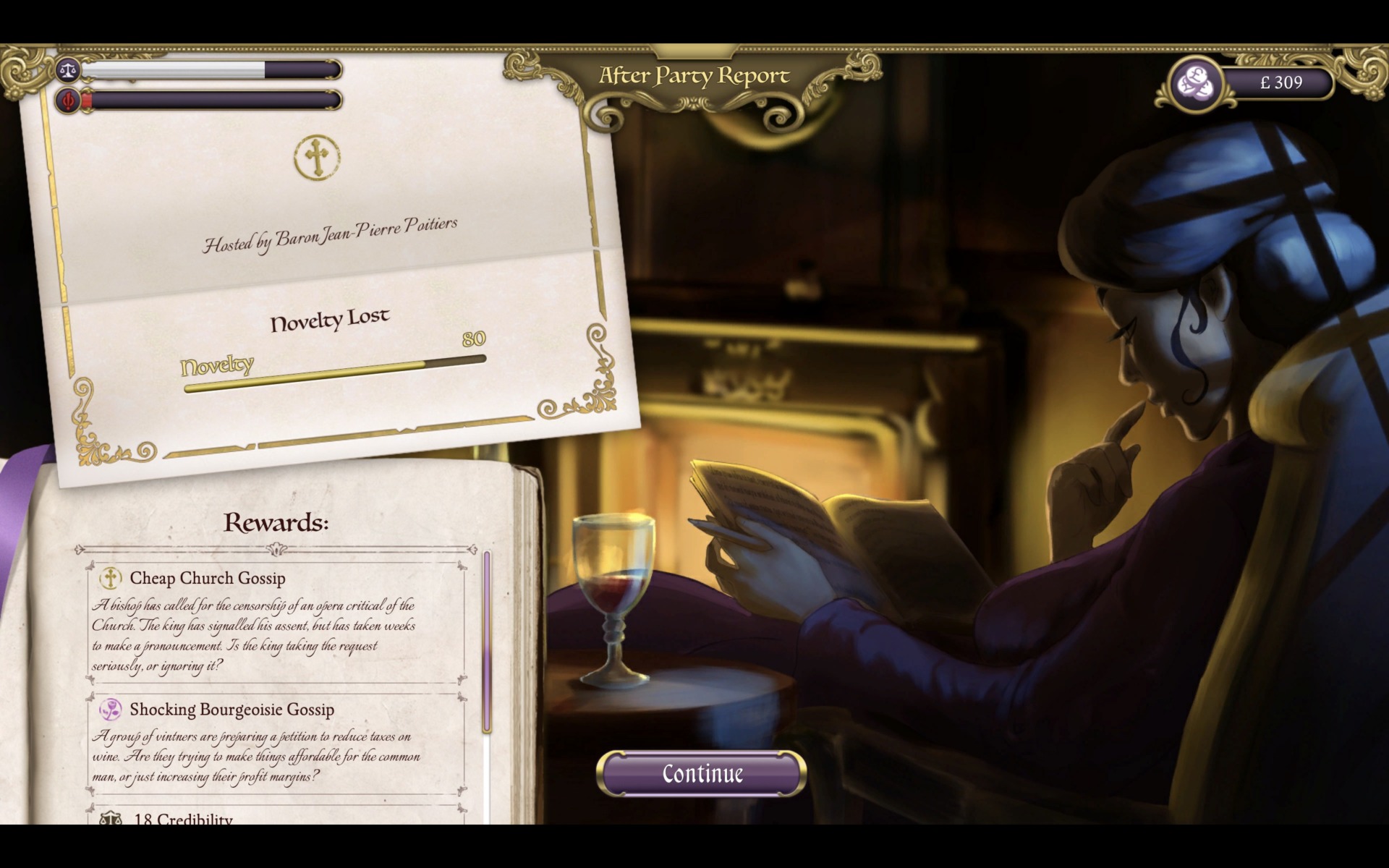 That isn’t to say there aren’t potential bad endings. And, likewise, there are good ones as well. Players’ choices will influence factions and relationships. And these are both men and women to potentially romance. While yes, you could see yourself in prison for your behavior or beheaded, playing smart seems to avoid those sorts of risks. But again, Ambition: A Minuet in Power both intentionally and unintentionally offers ways to mitigate disaster. Both through doing things like paying a bodyguard to join your household and being diligent about saving.

There are also some times when I felt like the characters you are supposed to care about are a bit flat. You don’t know enough about your missing betrothed Armand to know if being loyal to and searching for him is worth it. Since you’re primarily getting to know people through brief, perhaps chance, interactions, I didn’t feel like I was getting enough of a sense of who they were to determine if I wanted to hang out with them, let alone pursue any sort of relationship. 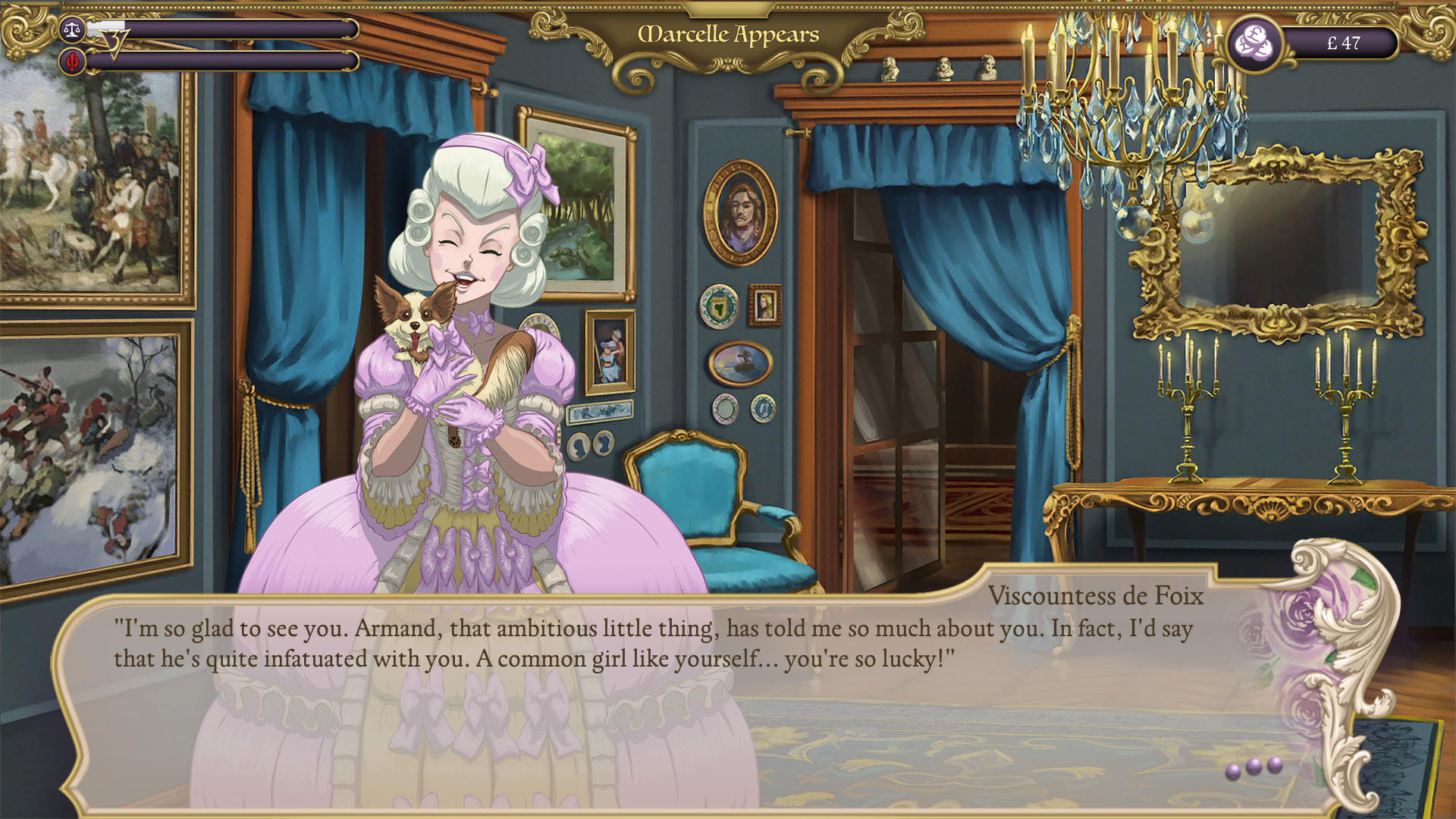 There are times when I really enjoyed what Ambition: A Minuet in Power was doing, or at least trying to accomplish. But I felt a bit detached while I played. This, in turn, made it difficult to really care about the influence I had and which sides I might take. It’s definitely entertaining and, if you aren’t willing to frequently save and plan carefully, might even challenge some people. But it is definitely the sort of game that really only courts its primary audience, and those are people who enjoy visual novels and managing schedules.

Ambition: A Minuet in Power will be available on PCs via Steam on August 18, 2021.

Ambition: A Minuet in Power

18th century Paris - a city of love, lies and revolution. You are a woman of fashion trying to survive the political turmoil. Date a cast of unforgettable characters. Amass the wealth and respect you deserve. Engage in gossip that can alter the course of history, or lead you to the guillotine.
6