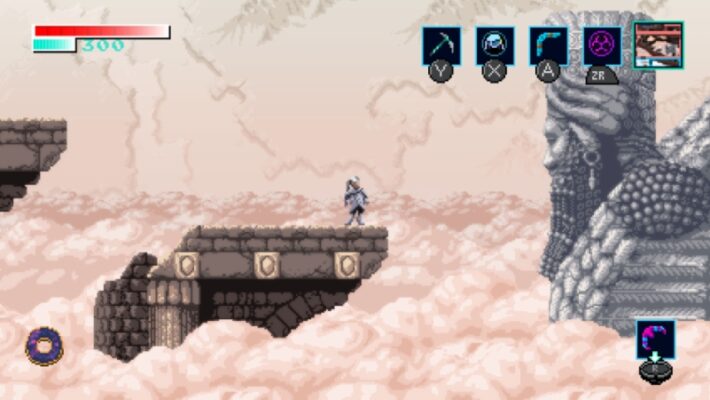 I thought I had seen everything Axiom Verge 2 when I could jump to my maximum height while underwater, thus becoming able to reach all manner of places I couldn’t before. Then I learned to climb the walls, and the world expanded greatly. The game got even bigger when I gained the ability to turn my hand into a tiny spider drone, opening up still more possibilities. And then came the Breach.

Though its title implies Axiom Verge 2 is a sequel to the 2015 original, it’s better to see it as a new game in the same family from the same creator (one Thomas Happ). In fact, if you’re not the type to sit on the menu screen for a while to wait for the introduction to load up or hunt down scattered bits of lore hidden across the world, you’d be hard-pressed to say there was much of a narrative at all. 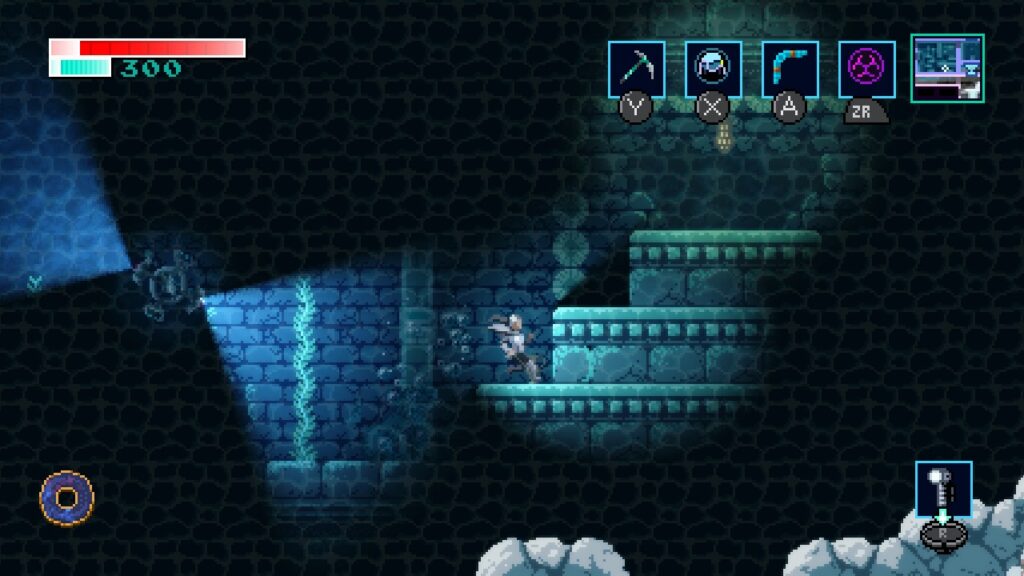 Axiom Verge 2 puts you in the role of Indra Chaudhari, a billionaire CEO attracted to a deserted outpost in Antarctica by hints about the location of her long-lost daughter. Before long, she’s transported to a strange alien world teeming with physics-defying geography and hostile drones from a war between two long-dead civilizations. She’s also forcibly converted into a strange nanotech cyborg of sorts and pressed into exploring the land in search of a way back to her human body and home.

If there’s one overriding feeling that propels the experience of playing Axiom Verge 2 for the first time, it’s that periodic widening of your horizons. What seems impossible in the moment becomes achievable after an hour or two, and every dead end becomes a new path forward, up or further to the side. 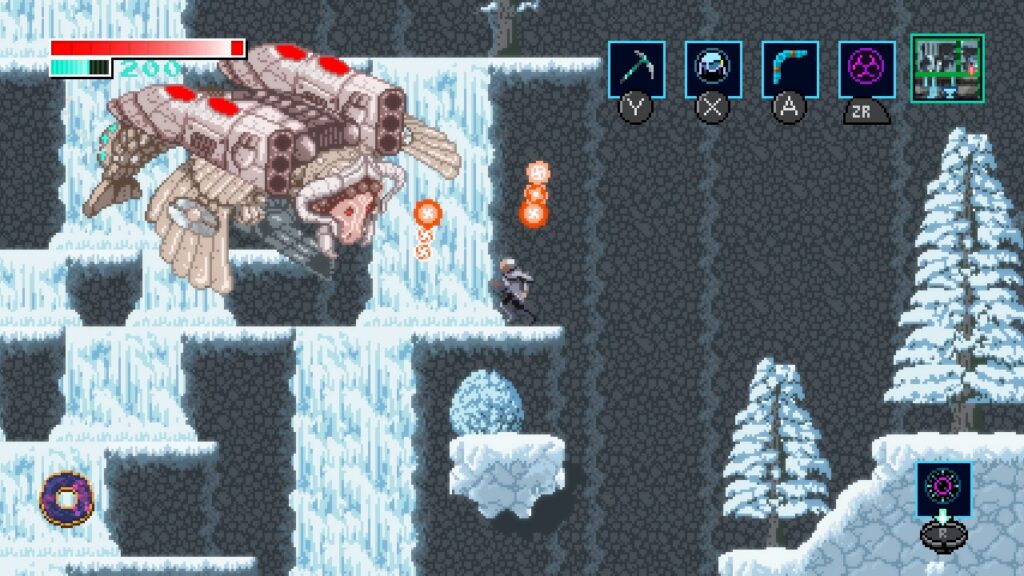 It’s a pretty novel feeling, especially for players with limited experience with “Metroidvania” games. Where open-world titles like The Legend of Zelda: Breath of the Wild or Skyrim hook players with grand vistas encompassing all the places they can go, Axiom Verge 2 gives the impression of an initially small space that’s constantly growing, inflated and changed by your growing capabilities.

Nowhere is that more apparent in Axiom Verge 2 than in the Breach. The Breach is an alternate dimension that you can visit with your drone. Initially accessible only from designated points, further upgrades increase your ability to move in and out of the Breach freely, whereupon you realize that it’s not just a new map, but one that’s carefully overlaid over the old one. 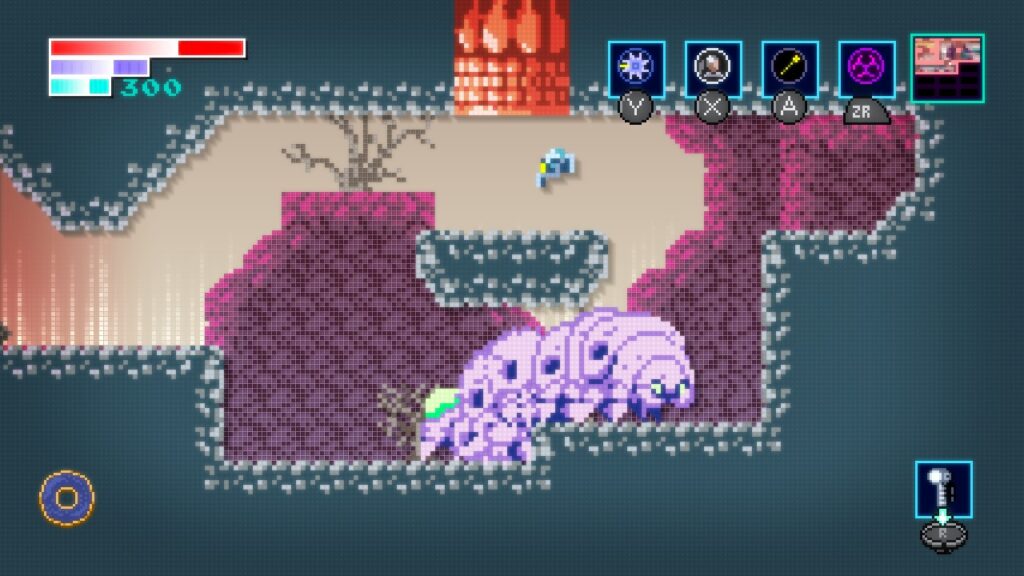 Realizing that makes pushing into the Breach and exploring its warren-like labyrinth of claustrophobic tunnels is as critical as exploring on the outside. In a way, Axiom Verge 2 becomes two games in one. On the “outside” is a bright, naturalistic otherworld explored by Indra Chaudhari. Inside is a technicolor maze, aesthetically distinct from the rest of the game and easily just as varied.

Axiom Verge 2 also differs from its predecessor in another key way–combat. Where the previous game relied on an arsenal of guns to get the job done, Indra’s talents are generally melee-focused. You’ll be wielding her deadly pickaxe and a throwable boomerang for much of the game, and most of the upgrades I found didn’t change the general dynamic of fights much. The drone is also a melee-focused unit, with a little buzzsaw and a slingshot move using its grappling hook. 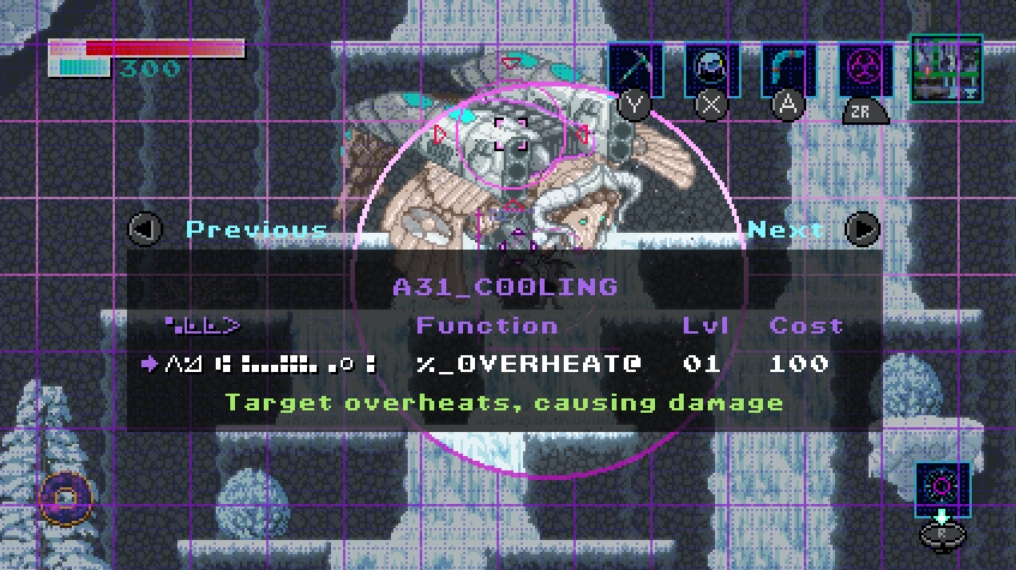 Like Axiom Verge‘s “glitch gun,” Indra can send out a cloud of nanomachines to hack any enemy she encounters and a number of objects in the world. These hacks amount to the ability to select from a number of options to affect an enemy with. These range from opening or closing a door, to slowing down or causing an enemy to self-destruct. Even boss-class enemies can be hacked, shutting down their weapons and rendering them harmless enough to be bypassed easily.

Indeed, bypassing fights is an entirely valid option in Axiom Verge 2. No longer are areas gated off by unavoidable boss battles, rendering some of the game’s biggest and most complex enemies mostly optional. As a whole, combat seems quite de-emphasized in the sequel compared to before, with the game’s design favoring the removal of obstacles that could fully roadblock a player’s progress. 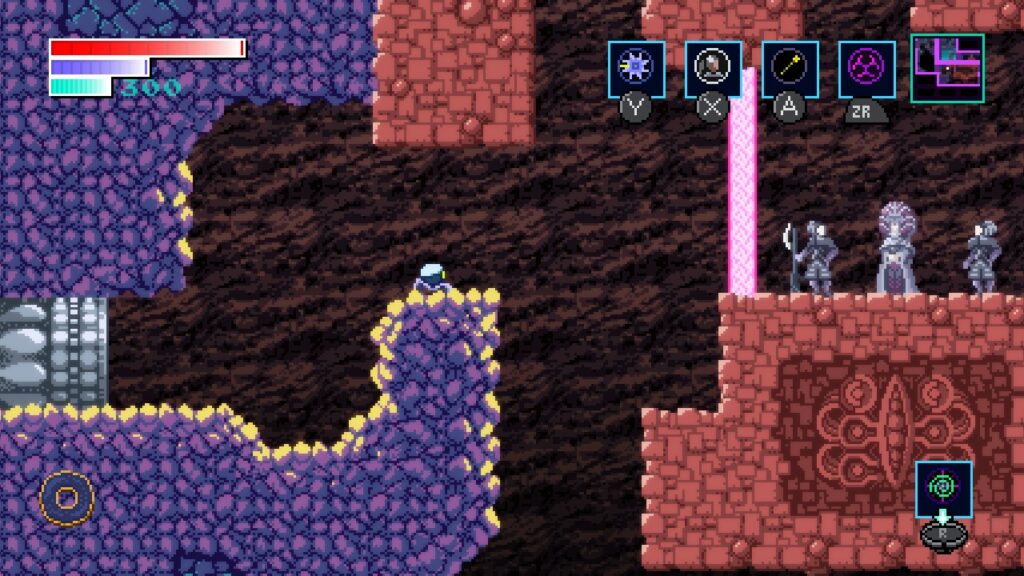 This increased accessibility is also reflected in an adjustable difficulty system that allows players to freely tune how much damage they can take (and deal out). Late into the campaign, I found a favorable balance in which enemies dealt somewhat less damage and I dealt somewhat more. It made it easier to explore freely, while still ensuring that enemies remained threat enough for me to want to deal with them, without risking throwing me all the way back to a save point (unless I wasn’t careful).

Though overall Axiom Verge 2 feels like an approachable and carefully thought-out expansion on its predecessor, it’s not without its rough spots. The lack of hand-holding can at times feel frustrating, particularly if you’ve been late to unlocking some more convenient upgrades like fast travel. The game lacks any kind of journal, hint system, or narrative log, meaning that it can be easy to forget just where you’re supposed to go or why beyond a little glowing point on the map. Indra is also equipped with a compass that tells her the direction of the nearest upgrade or objective, but it’s purposefully vague and fades with distance.

Some abilities, such as the drone’s grappling hook, are also a bit fiddly. That vagueness as to whether a given ledge could “catch” it or not led to a number of points where I would spend time just jumping in place seeing if I could actually make it or not.

All in all, though, these are relatively minor blemishes on an impressive, bold follow-up to an acclaimed modern classic. Whether you’ve been champing at the bit for a new take on Axiom Verge or if this is your first experience with a Metroidvania, Axiom Verge 2 is a dense, beautiful game that’s easier than ever to get into and shouldn’t be missed.

Axiom Verge 2 is available on the Nintendo Switch, PS4, and PC via Epic Games Store.

Take CEO Indra Chaudhari on a trip through a mysterious new world in Axiom Verge 2, follow-up to the 2015 original. Players will explore an alien planet and fight off hostile drones belonging to an enigmatic civilization, while gaining new powers and abilities. PC version reviewed.
9