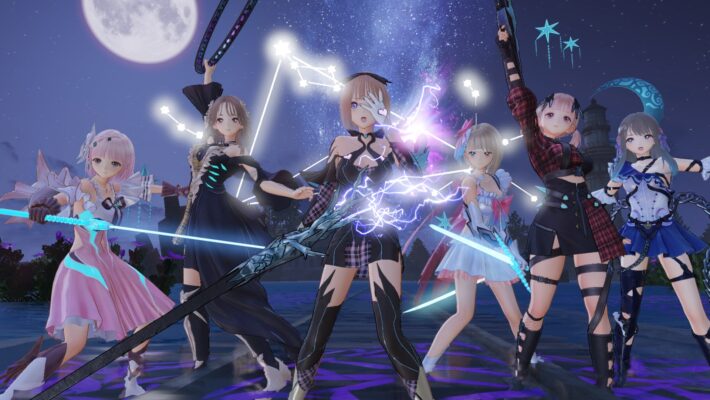 Blue Reflection: Second Light, which is essentially Blue Reflection 2, is a game of many mysteries. Why did Ao and a number of other girls wake up to find themselves in a deserted school? Where are they? What caused them to lose their memories? How is it that some young women can turn into magical girls called Reflectors? While the players possess as little insight as them (unless they played or watched previous Blue Reflection stories), Gust’s latest is good at doling things out in a surprisingly relaxed way.

Ao had a weird day. While heading to school, she dropped her phone. When she went to pick it up, she saw a message. “Be reborn.” When she “woke up,” she found herself at an abandoned school with three other girls. Kokoro, Rena, and Yuki all suffer from amnesia. Also, all four girls had strange rings on when they appeared there. Apparently, thing were “boring” until Ao showed up. Once she did, things started happening. An additional landmass, filled with demons, materials, and memories showed up. Ao, Kokoro, and Rena discovered their rings let them summon weapons. As they’d fight battles, they’d even eventually shift gears. Which would trigger magical girl transformations into Reflectors. 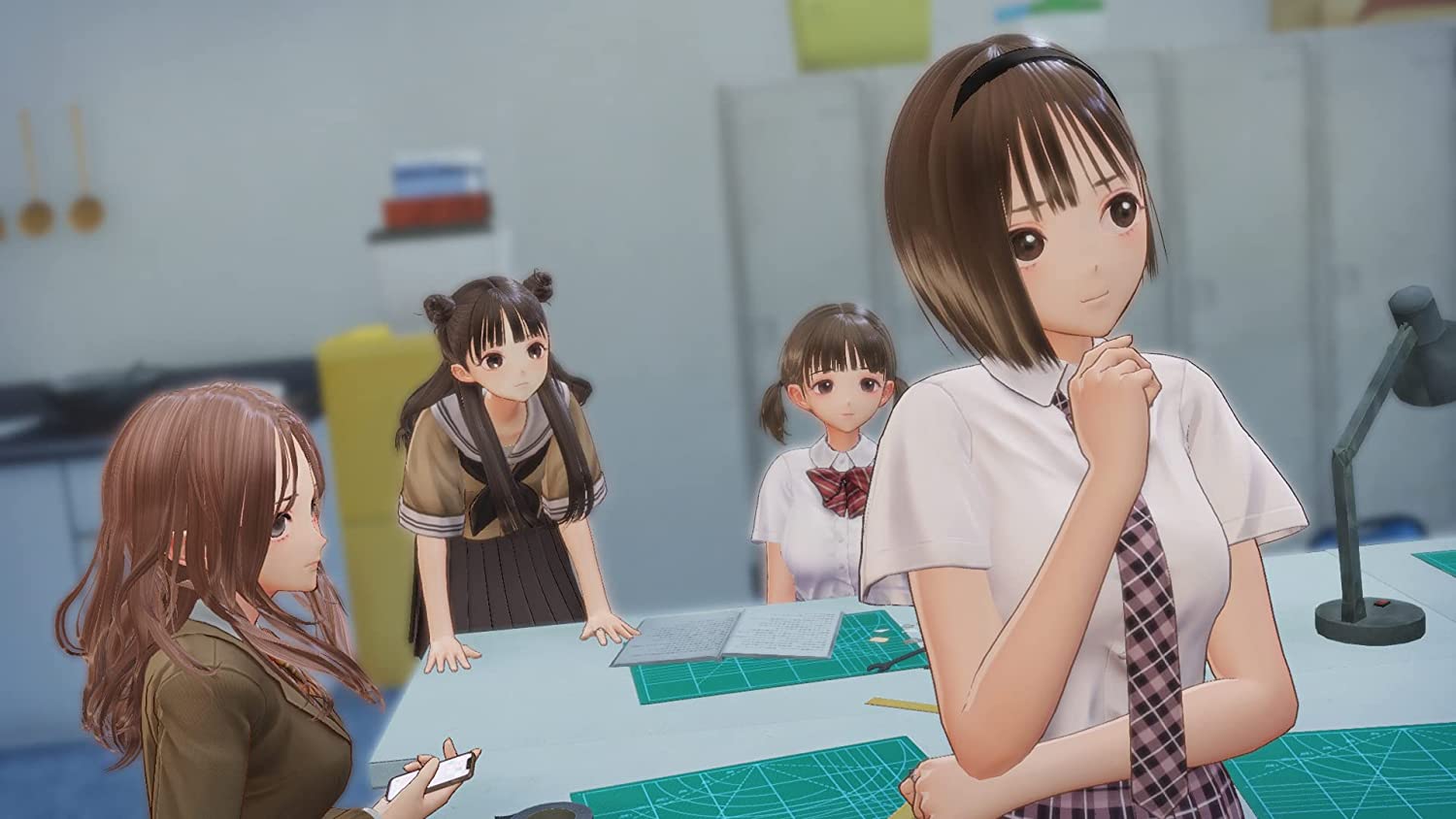 This leads into a satisfying feedback loop. Blue Reflection: Second Light tends to follow a certain path. Chapters can focus on certain characters. A Heartscape will appear. You explore it, growing strong from its fights and collecting new materials. When you happen upon memory fragments, you might find new recipes or see hints at a person’s past. Each area looks “familiar,” in a way. You’ll see elements of the real world. But they’re combined in ways that could look foreign or even supernatural. Also, while you can’t jump, you’ll happen across spaces where actions like balancing, crawling, or leaping are possible. Not to mention you can activate a stealth mode that shows all enemies’ range of vision, allowing you to sneak past foes you can’t defeat yet to reach objectives.

Blue Reflection: Second Light’s battles build on systems from both the original game and other Gust games like Atelier Ryza 2. Ao and two other Reflectors will be with her at once. She’s directly controlled. Players press the action button when she gathers enough Ether to perform a move. Once you bring up that menu, you can select a skill to attack or support the group. If an enemy is weak to or will resist it, there will be a notification. The two allies are tied to the trigger buttons. You can allow the game to automatically control them. Which I don’t recommend. (Especially early on, as you’ll need Rena to heal on demand.) It’s fine. There camera gets a bit hyperactive, as there can be constant movement as characters attack. I also wish there’d been a different method for triggering allies. Constantly having to keep an eye on the action bar and press ZL and ZR on the Switch, in addition to pressing A when necessary, got to be a lot when I would fight to build up characters’ levels or gather materials. 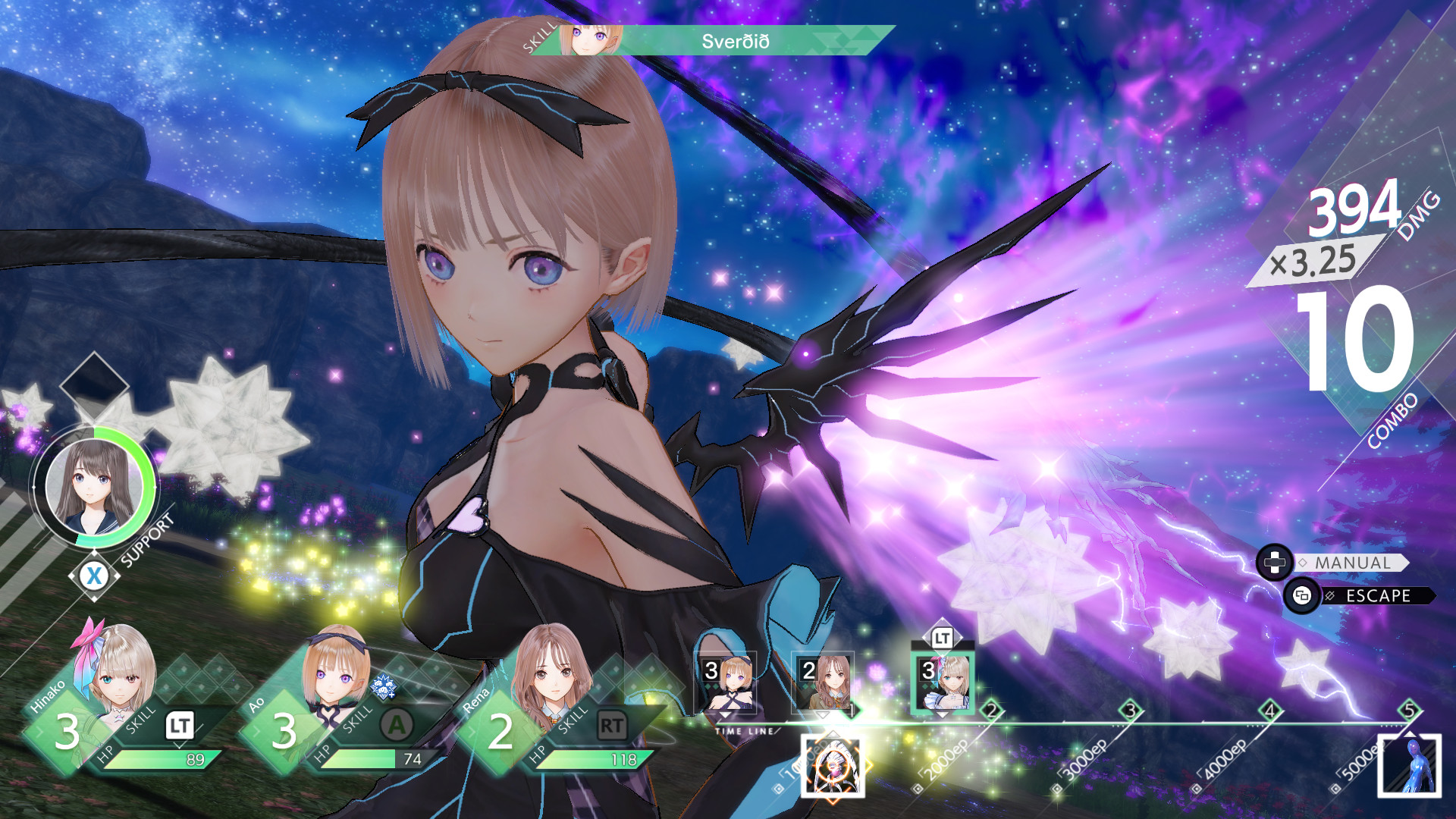 As characters attack, they’ll enter different gears. First gear caps them at 1,000 Ether. Second lets them accumulate 2,000. Which lets you perform different attacks or attack more than once. Third transforms them into their Reflector form. (You can turn the transformation sequences off in options or set them to once per trip into a Heartscape.) Not to mention continually attacking and protecting the combo gauge with skills ensures the group will gradually keep dealing more and more damage each time they attack enemies. There are also opportunities when facing a boss to go into a one-on-one fight that ends with the foe being finished off. It really provides a sense of characters building up to a pivotal moment in a fight. You feel like they’re getting stronger.

While the pace in the Heartscape never feels exactly rushed or frantic, things are even more relaxed at the school. This is where all characters gather and live their new lives. You can visit with people to talk to them. Finding folks is easy, as pressing the trigger will let a player fast travel to specific areas or people’s locations. It also shows if they have an active request. You can craft based on recipes here. (Make sure you check who you make things with. It can change the results.) You can build up facilities. These can provide some fanservice moments. More importantly, they’ll make the people who matter to you happy. Which means that person affected by the facility will get some sort of buff in battle. But more importantly when you’re at the school, it can feel like the characters have a moment of peace. They can relax. They make things. They talk. They enjoy what they have. 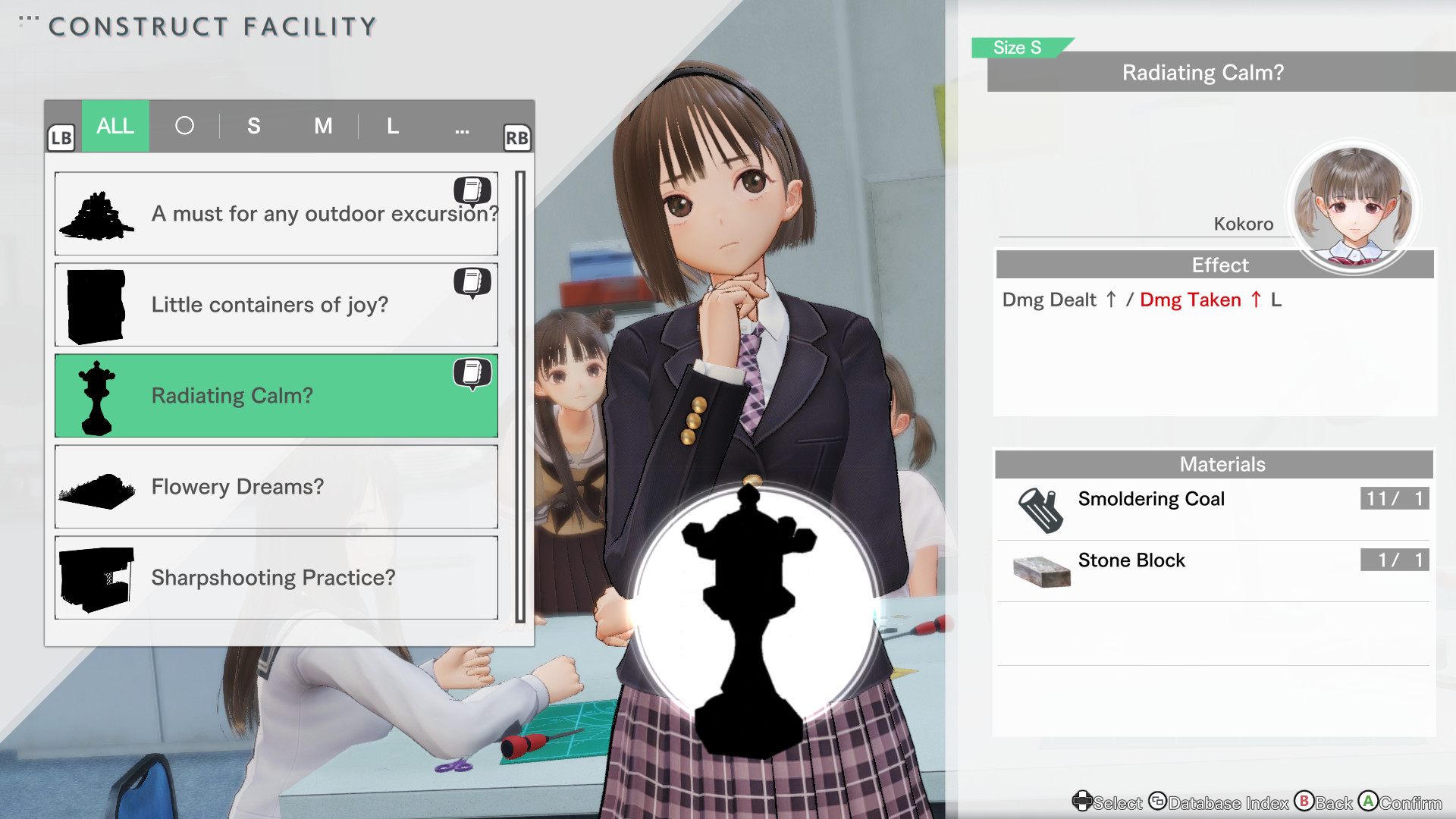 Like the original Blue Reflection, Blue Reflection: Second Light is dedicated to its heroines. You get plenty of moments to learn who they are. You watch them connect to one another. It’s a very emotional game. Which makes sense, given you are exploring Heartscapes and the nature of the series. It gets especially poignant when the focus is on someone who is a Reflector. It ends up being an examination of what life is like for a magical girl. What do they go through. How did they potentially become one. Even characters’ Talent skill trees refer to who they are, with certain traits connected to personality attributes. You can also spend on-one-on time with characters on Dates. This lets you walk somewhere with another heroine and speak at specific locations like certain rooms or Facilities. Once there, you choose Ao’s responses and see people connect.

It also means the relationships between people in Blue Reflection: Second Light net many rewards. Taking requests can unlock new skills and award Talent Points. The same with Dates. Those also provide Fragments, which make Reflectors stronger. Icons in the menu offer hints as to what you might need to do to acquire more Talents. So you constantly need to spend time with each other and run errands for Talents and Talent Points to get them.

The downside of going on dates is that, on the Switch at least, it doesn’t feel very smooth. The girl you’re going out with and Ao will walk at a more stilted pace. She might also get in your way as you try to move around. Given you also can’t run while on a date, it also means a much slower pace. So what should be a sweet moment might be marred by the game’s performance. 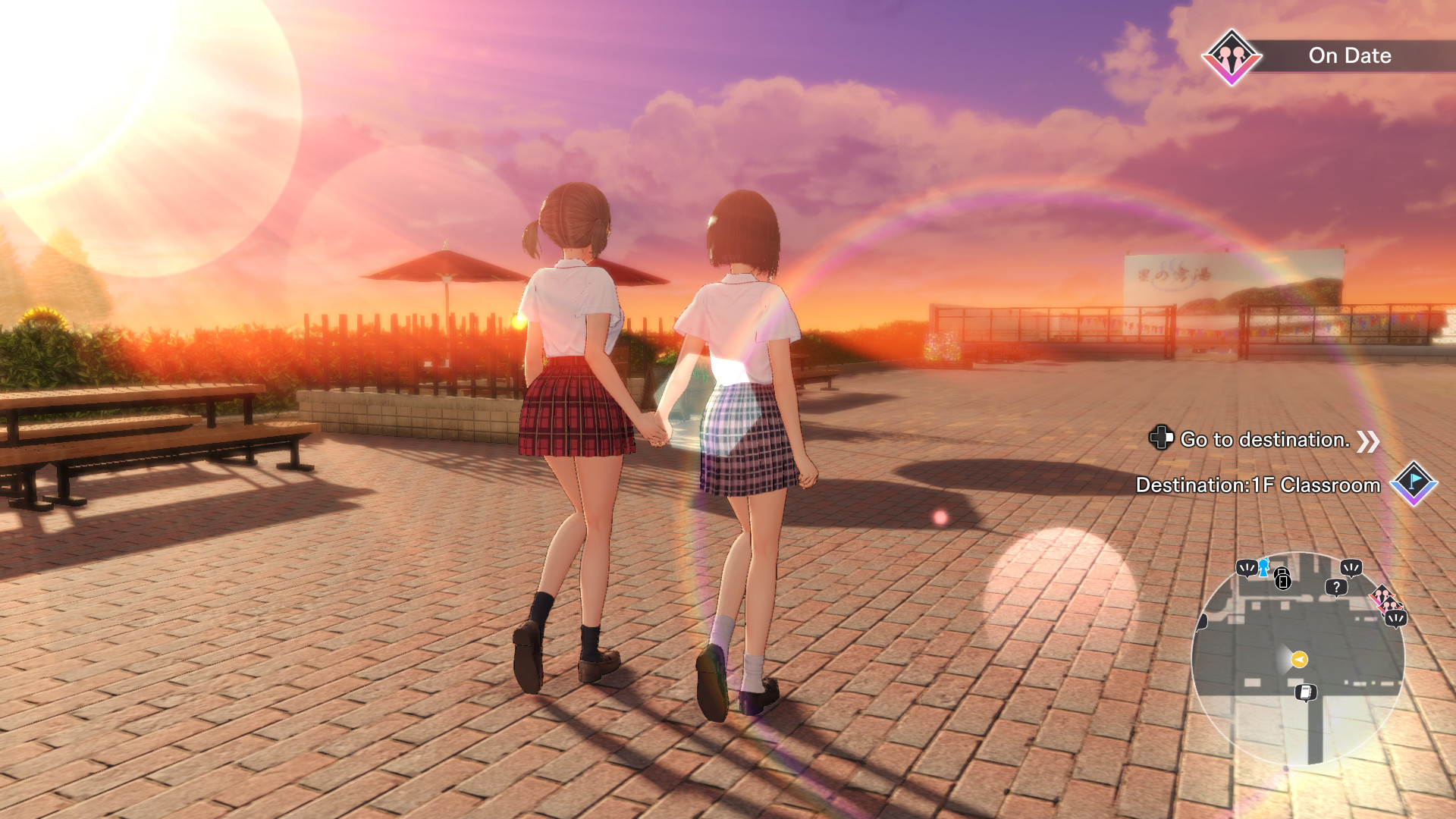 Technical limitations get in the way on the Switch during general exploration as well. Sometimes when moving around a Heartscape, the camera might get into an odd position. Which can make it difficult to get a good view of the space around you. You might happen upon a place in the school or Heartscape where moving to a position or turning the camera could lead to forced blurriness until you readjust Ao or the camera.

Occasional camera issues or technicalities aside, Blue Reflection: Second Light is quite a pretty game. It can be very serene and pastoral. Everything about its appearance feels designed to encourage someone to take their time and focus on characters. It focuses on slice of life moments.

The thing about Blue Reflection: Second Light is that it often feels like it requires prior knowledge of the series. While this is essentially Blue Reflection 2, it is coming after both the first game and an anime. Characters from both show up here. While It does start with four people and takes time to introduce them and concepts, knowing general ideas about the universe helps a lot. For example, understanding what a Reflector is can be quite helpful. Awareness of other elements from, at the very least, the original Blue Reflection can offer additional insight. I do think people coming in fresh could still enjoy it. But you will get more out of it by doing the required “reading.” 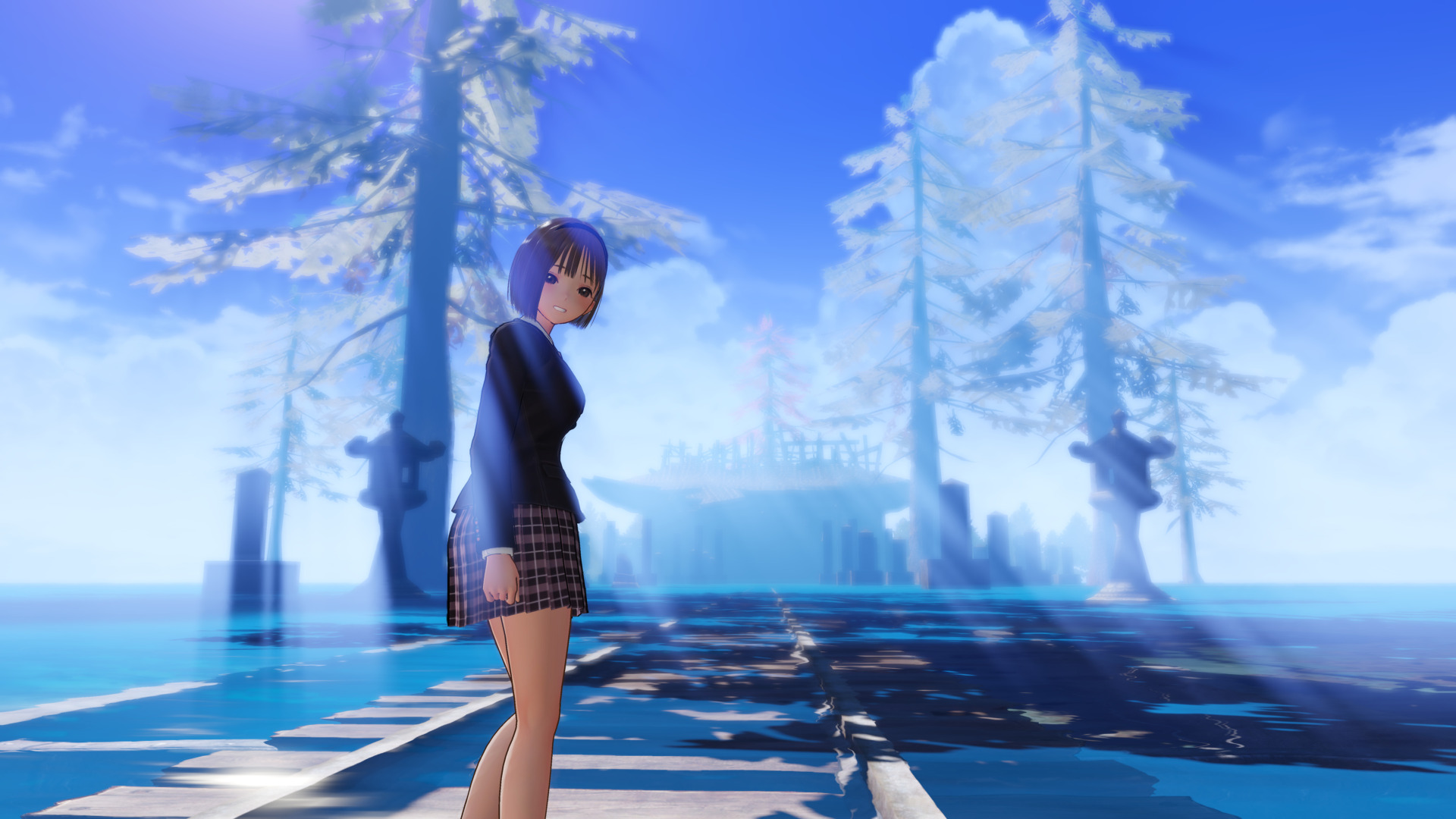 Blue Reflection: Second Light is pretty much exactly what I expected Blue Reflection 2 to be. It’s a very relaxed sort of RPG. Even though there are mysteries to solve and danger, I didn’t feel pressured. Rather, I felt encouraged to talk with people around me and take my time as I crafted, explored, and fought through its world. But also, I feel like I came into it with the best mindset. I played the original game and watched Blue Reflection Ray. People who aren’t as into Gust games and everything they entail—which can involve crafting, gathering, and perhaps sometimes a slower pace than other RPGs—might not be as into it. But those familiar with Gust’s work or perhaps looking for a new adventure after Atelier Ryza might want to, at the very least, check out the demo.

Blue Reflection: Second Light will come to the Nintendo Switch, PlayStation 4, and PC on November 9, 2021. A demo is available on consoles.

Under a piercing blue sky, surrounded by crystal clear water, the sun scorched Ao Hoshizaki's skin. Gazing at the summer scenery, it seemed as if the girl was left behind in a world that she had wandered into. At a school adrift in the distance, there lived three girls who had lost their memories. The only thing they could remember was their names. Ao, shrouded in confusion, begins to lead a strange communal life with the girls as they seek clues about a way to return to their original world. Switch version reviewed.
7