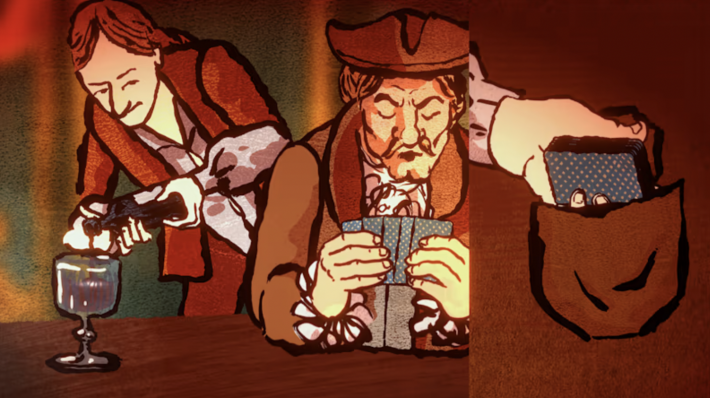 I’m okay at card games. Better at things like Pokemon Trading Card Game and Yu-Gi-Oh than Blackjack, to be sure. I suck at shuffling too. But after some hours playing Card Shark on the Switch, I felt overconfident and daring. Like maybe I could pull off the Three-card Monte! Perhaps I could ensure a certain person would get all high-value cards when dealing? Okay, probably not. But this game made me feel confident in my virtual self!

Card Shark follows an individual who falls in with a con-man called Comte de Saint-Germain. After helping him cheat at a game in an inn, things go horribly awry. Your former employer is killed, and you’re essentially framed. But the Comte takes you on as a partner, and the two of you head to the Court of Miracles. It’s a place where essentially the unwanted in France end up. While you will be conning folks out of money, you’ll also be supporting this community and gathering information about the monarchy.

Now, the name in Card Shark may make you think this is actually about playing cards in some way. Nope! Rather, you’re trying to cheat your opponent while keeping them from getting too suspicious. Your goal is to get both money and information. Before games, the Comte might teach you a new grift to use against a mark. Maybe it will be a way to signal what cards are in play? Perhaps you’re trying to ensure cards appear in certain places when you deal them? These involve brief minigames. So when you play Three-card Monte, like I mentioned earlier, you’ll actually be going through a rhythm game. Others might involve keeping track of when to pick up certain cards or perform certain actions, and in what order to perform certain movements.

As for suspicion, it sort of acts as a timer. If you aren’t smooth when pulling off a con or take too long, the mark catches on. While being “off” once or twice won’t ruin an endeavor, consistently messing up will cause the gauge to fill to dangerous levels. Which in turn foils your plot. As I was playing Card Shark on the Switch, I was a bit concerned about it. For example, when attempting to ensure the Comte would always get the highest cards in his hand when dealing, I messed up quite a bit in practice! Figuring out the right direction to pick them up in got tricky!

But there is an extra cushion that can help if there’s a particular short-con that stumps you. Card Shark offers multiple difficulty options. The normal one is fairly forgiving when you’re first picking up these tricks. But it isn’t the end of the world if, for a particular game, you make things a bit easier or turn hints on. It’s a nice bit of accessibility if you’re enjoying the story and most of the minigames, but one is getting you down. It is a shame that not every card trick is going to be great, but I enjoyed more of them than not.

Because really, Card Shark is the kind of game in which someone could be in it for only the adventure and ambiance. It possesses such a distinct look. It feels vintage and like it keeps with the classic French time period. The characters are interesting and expressive. For example, I’m a big fan of the Comte and avatar’s expressions throughout the story. (Especially when the Comte’s look is saying a lot about the size of donation you might make to the “Court.”) The card games themselves suit the moment, but are also clear when conveying information. So even if there was a situation where I wasn’t “feeling” the current trick, finding out what would happen next made it worth going through it.

Card Shark is a game that made me feel daring, and I was glued to my Switch trying to outsmart my opponents. Yes, every once in a while I’d come across a con I didn’t enjoy as much as the others. But considering the assortment of tricks you learn and the way the challenge grows, it still can feel very satisfying. Especially since the story that happens while taking advantage of marks is so compelling.

Card Shark is an adventure game full of cunning, intrigue, and delectable deceit. Enter a world where you’ll need to play your opponents better than you play your cards. Switch version reviewed.
8