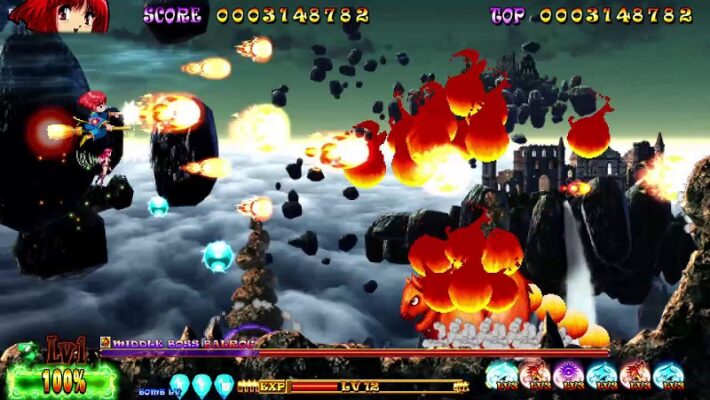 Cotton Reboot is a remake of 1993’s frantic “cute ‘em’ up” Cotton: Fantastic Night Dreams. Well, cute in a Castlevania kind of way, as you’ll be blasting all kinds of ghouls, zombies, and undead monsters as you try to get a few pieces of candy. And save a kingdom or something. Not exactly a big concern for our lead witch, Nata, who’s only interested in laying waste to hundreds of living creatures if there’s some tasty treat involved. It’s as good a motivation as any for this lighthearted, fun, but challenging shmup. Shmups, to be more precise.

This title contains the original X68000 release of the game, as well as a new arranged version. While both share similar mechanics, their behaviors and play are so wildly different they feel like two distinct games. You’re going to be shooting a whole bunch of monsters with powerful magics, but the visual effects, your weapons, as well as some changes to how scoring crystals work, mean you’ll get two different experiences depending on how you want to play.

The X68000 version within Cotton Reboot is a good shmup with some clever mechanics. You have a basic magic shot and bombs, and your shots get more powerful as you kill enemies and pick up the crystals they drop. The basic crystal is worth a set amount of experience to increase your shot power, but if you shoot it a few times, it will bounce in the air, shifting colors. You can get it to change to a few different shades to get the most out of the pickup (orange gives more experience, while red and blue crystals give you explosive bomb-like spells you can stock up), but if there’s no ground beneath you and you let it fall, it will tumble off-screen and you’ll gain nothing. 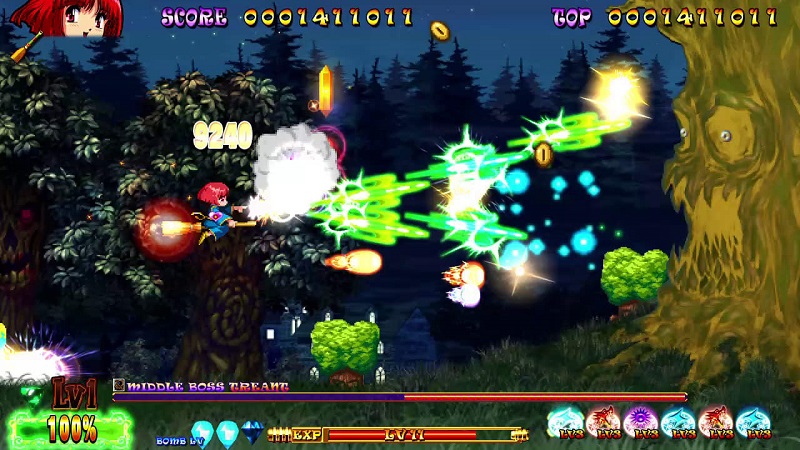 This gets the player to constantly juggle these crystals as they play to increase their strength. Grabbing crystals quickly can get you powered up pretty fast, but you’re better off trying to bounce the crystal a few times to get something stronger and more valuable. You have to make the decision quickly, though, as there are plenty of enemies rushing your way at all times. While they’re adorable (in a gruesome kinda way), they’ll kill you quickly, dropping your shot power in the process.

Through these mechanics, you get a precise shmup from the X86000 version on Cotton Reboot. Your shots aren’t very big, so you need to take careful aim if you want to bounce crystals around AND clear enemies from your path. This meant a shift from my regular instinct of just spraying the screen with shots, as I might bounce a crystal out of my path, or worse, hit the crystal too many times and shift it back to a previous color (it cycles through if you keep hitting it). I had to take care with my aim, which is quite a feat with enemies and traps crowding the screen constantly.

If you want something a bit more visually explosive and chaotic, the Arrange Mode is for you. Here, you get a massive visual upgrade. The pixel work in the X86000 version looks great, don’t get me wrong, but the Arrange Mode looks much sharper, with more detail on the foes and some fantastically grim backgrounds and locales. Getting to see both modes gives you a real appreciation for what was done with the visuals for this remake, as well as how good the game looked way back in 1993. 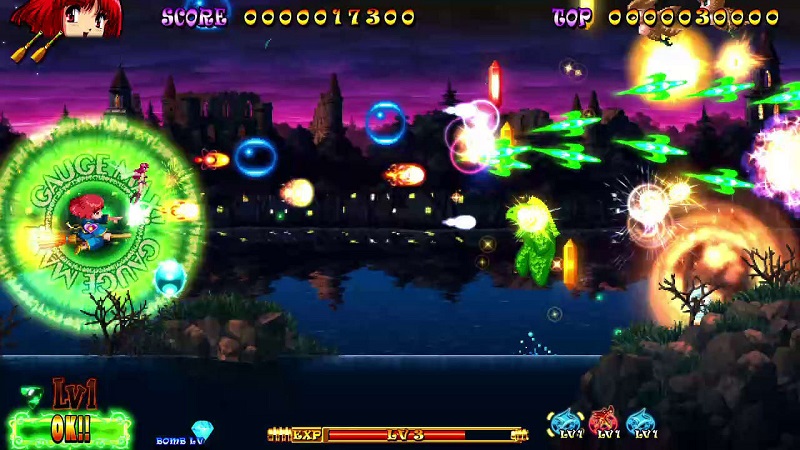 As for the explosive side of Cotton Reboot, everything packs a bigger punch in this mode. Enemies burst with bigger explosions. Your shots are wider and faster. Your magic spells look wilder. When you shoot a crystal in this mode, your shot splits into two powerful beams, encouraging you to leave crystals a bit longer (they also float, meaning less juggling). You still gain better benefits from shooting them, except now, the crystals are also worth more points if you can shoot them for an extended period of time.

This shifts the play from a juggling act to a game of chicken with your enemies. If you can keep consistent fire on a crystal, you’ll annihilate anything that comes in front of you. You’ll also shift the crystal to something of higher value, and rack up massive points if you can sustain it for really long and collect the crystal after. You often have to stay in one position or in a line for a long time, or avoid collecting crystals on purpose, which limits where you can dodge. Your hit box is quite tiny, so it’s very doable but you still have to take care with your movements to take full advantage.

My only issue is that the screen tends to get pretty cluttered in this mode of Cotton Reboot. There’s so many enemies, shots, explosions, and crystals floating around that I found it very easy to lose myself. Having a tiny hit box prevents it from being a terrible issue (plus you get continues), but you do notice it getting a lot harder in later stages. Your shots weaken with every death, so things do start to get annoying if you screw up a few times in a row when you can barely see what’s going on. I got better at figuring out what to pay attention to over time, but the screen can get very busy in Arrange Mode.

For light shmups that players of any skill can beat (SO MUCH more forgiving than R-Type Final 2), but with two different sets of mechanics that will give skilled players something to master, Cotton Reboot is a great game with a lot of fun to offer.

Cotton Reboot is available now on the Nintendo Switch and PlayStation 4.

Japan’s favorite shooter mascot finds her way into a beautiful HD game with stunning graphics and remixed soundtracks. This is the original “Cute ‘em up”, and will test your skills as well as tug on the heartstrings as Cotton and her friends are finally back in the ultimate celebration of one of Japan’s most beloved gaming mascots. Choose between the HD Reboot mode or go legit with the X68000 original mode with pixel perfect graphics from the iconic Japanese home computer. Switch version reviewed.
8