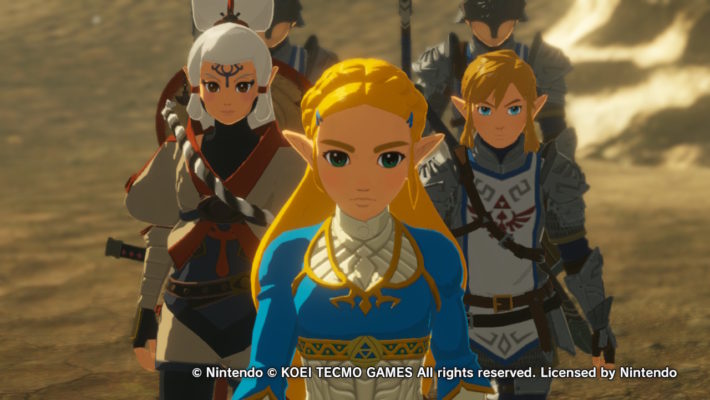 We know what happened to The Legend of Zelda: Breath of the Wild’s Hyrule. When we followed Link around the land, we saw the devastation and heartache that came from Ganon essentially winning the war before things were put on pause and we had a chance to step in 100 years later to save the day. Now, we’re getting a chance to live alongside the legends who did all they could to buy time and give Link and Zelda that opportunity. Though, Hyrule Warriors: Age of Calamity might not be exactly what people expect.

The game begins with a miniature Guardian from Zelda’s room in Hyrule Castle after the Great Calamity heading back to the past. This mascot follows along, conveniently acting as both a plot device and world map guide that hints at things to come. It happens into Hyrule’s past right as King Rhoam and Zelda realize Calamity Ganon is about to return. Like us, this small Guardian follows Link as he proves himself worthy of being his guard, the gravity of the current situation is grasped. The king realizes the four Champions must be called from the Gerudo, Goron, Rito, and Zora to act as Divine Beast pilots and the forces of good prepare to fight the battle we saw the aftermath of in The Legend of Zelda: Breath of the Wild. 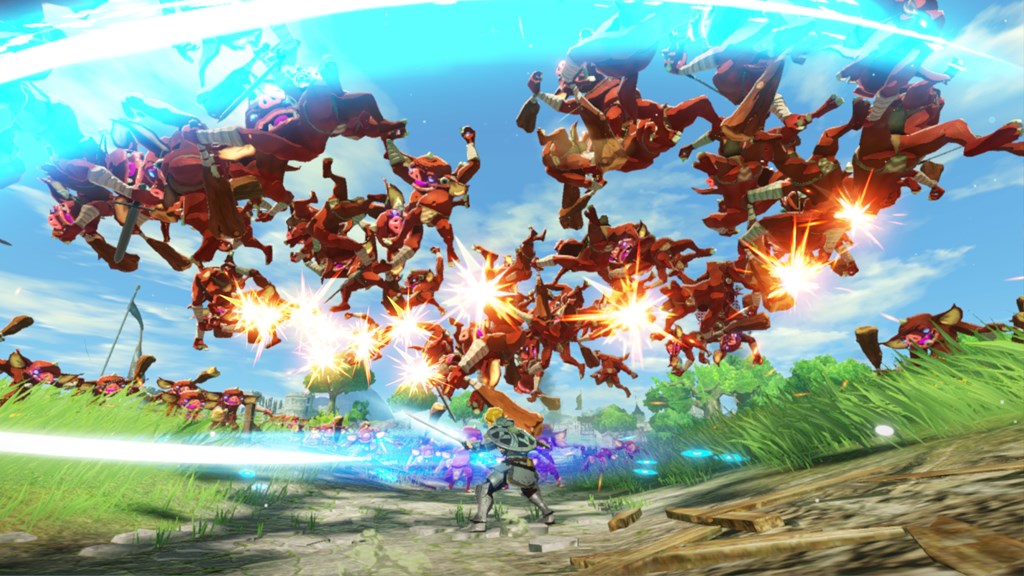 Hyrule Warriors: Age of Calamity’s most basic gameplay roots call back to Hyrule Warriors and Koei Tecmo and Omega Force’s Musou games in general. You are placed on a battlefield with hordes of enemies, some stronger than others or bosses. Multiple characters appear on the field at the time, with each one having their own sort of weapon and fighting style. As you go through the missions, which can get quite lengthy if they’re a campaign quest and not an optional task, updated assignments will appear as conditions change. You’ll also get new weapons, which can be improved and forged at a blacksmith. As you play with characters, they will level up and become stronger and you’ll acquire more to offer new options when taking on challenges.

In a nod to The Legend of Zelda: Breath of the Wild, the Sheikah Slate is here and used for certain attacks. (It also is Zelda’s primary weapon, so she’ll be using Rune abilities as normal attacks.) Cryonis, Magnesis, Remote Bomb, and Stasis abilities all unlock rather quickly, and you’re able to use them to attack or hamper opponents in the field. (There’s a cooldown after using one, of course.) To help emphasize that these are different people, each person might use Runes in different ways. So Mipha will have a AOE rain of bombs with Remote Bomb, while Link will chuck a bunch one after another in one direction. Link’s Cryosis will create an ice pillar, while Zelda will use it to drop icicles on enemies. 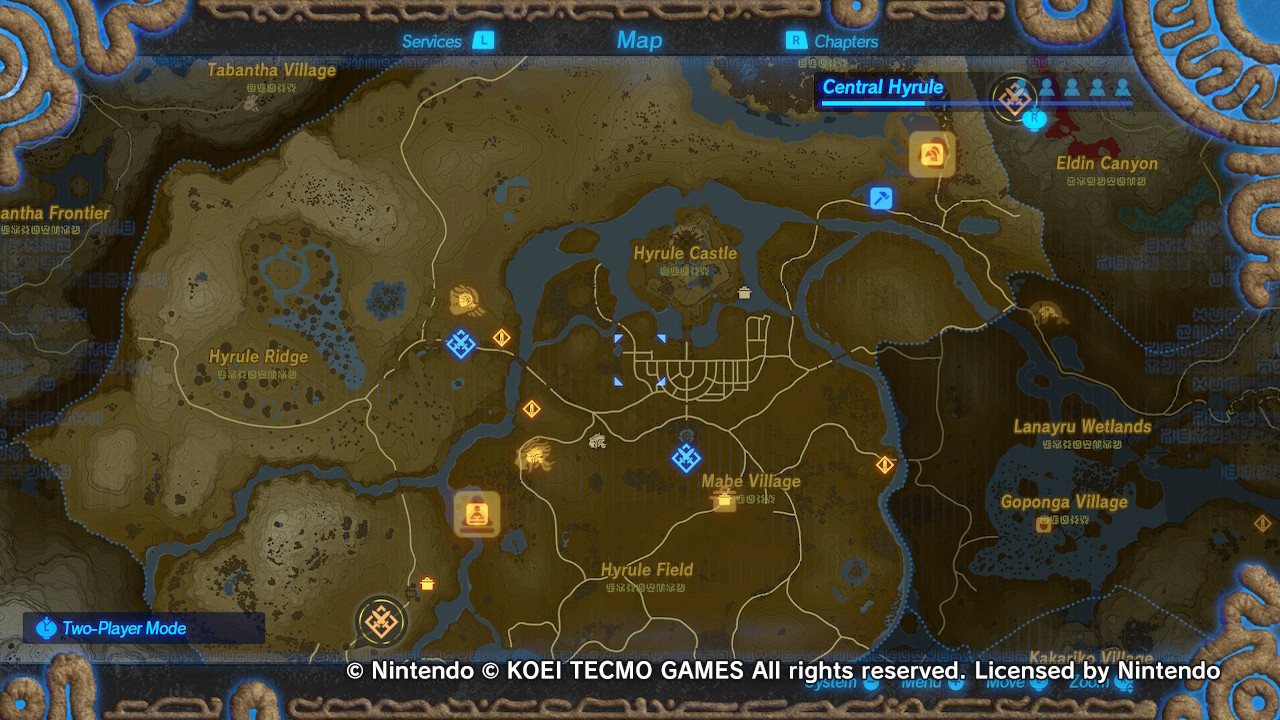 This line’s Divine Beasts are also acknowledged. Each of the four Champions, Daruk, Mipha, Revali, and Urbosa, have segments where you’ll be inside Vah Rudania, Vah Ruta, Vah Medoh, and Vah Naboris. These segments feel, well, a bit like mech battles. You’re a pilot with a specific moveset, moving high above areas in the kingdom, using specialized, powerful attacks to clear out thousands of foes at a time, rather than hundreds.

Basically, there are tons of nods to the original game everywhere. After the introductory mission, we see one of the towers Link was constantly climbing in The Legend of Zelda: Breath of the Wild pop up outside the castle. We look at the Sheikah slate to see a map, which resembles one from the original game and involves selecting major and supplemental quests. There’s a cooking component, which can alter your abilities heading into a battle, and a crafting one as well. It’s all quite welcome. 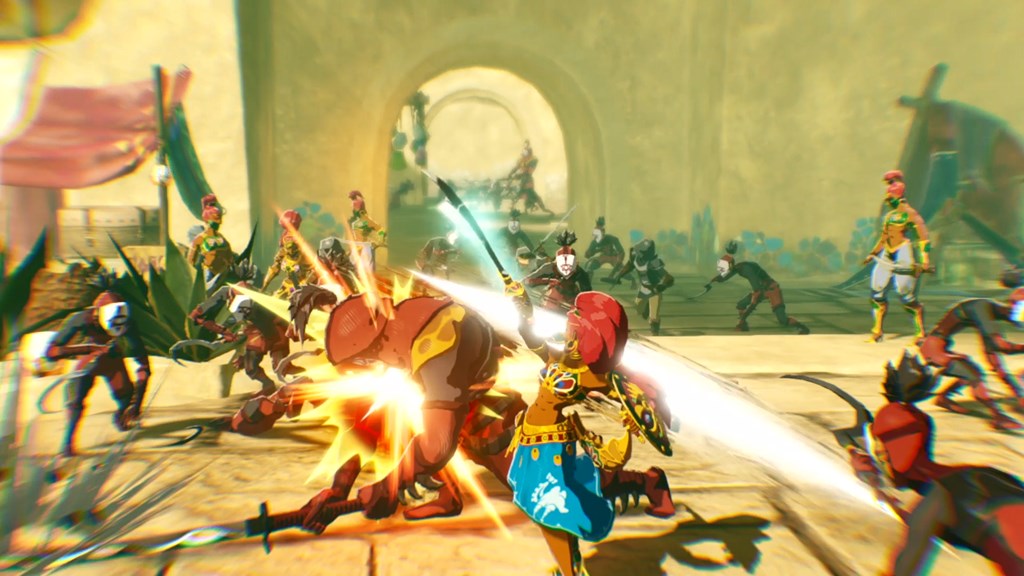 But, I also admit feeling a bit fatigued by Hyrule Warriors: Age of Calamity at times. I very much enjoyed the experience and how well it lent itself to the ambiance. It’s a fitting prequel and does a lot with the world. But it also can involve quite a bit of grinding to get materials to do things like extend character combos or acquire new things. Which means heading back into missions that, while engaging, do involve a lot of button-mashing to grind for the items you need most.

People accustomed to certain Musou trappings might be disappointed by the size of the roster. The titles Omega Force and Koei Tecmo have created for other IPs absolutely can’t compete with its own titles. (Warriors Orochi 4 has 170 characters, in case you haven’t been keeping up.) Spoilers aside, Hyrule Warriors: Age of Calamity comes in at over half the number of playable people as Hyrule Warriors Definitive Edition, which had 29 people to choose from. Granted, given the number of people we have to work with, it does make sense. But I do admit wishing that maybe one or two of the major NPCs had been given a moveset too. (I will say that people do unlock at a fairly good clip.) 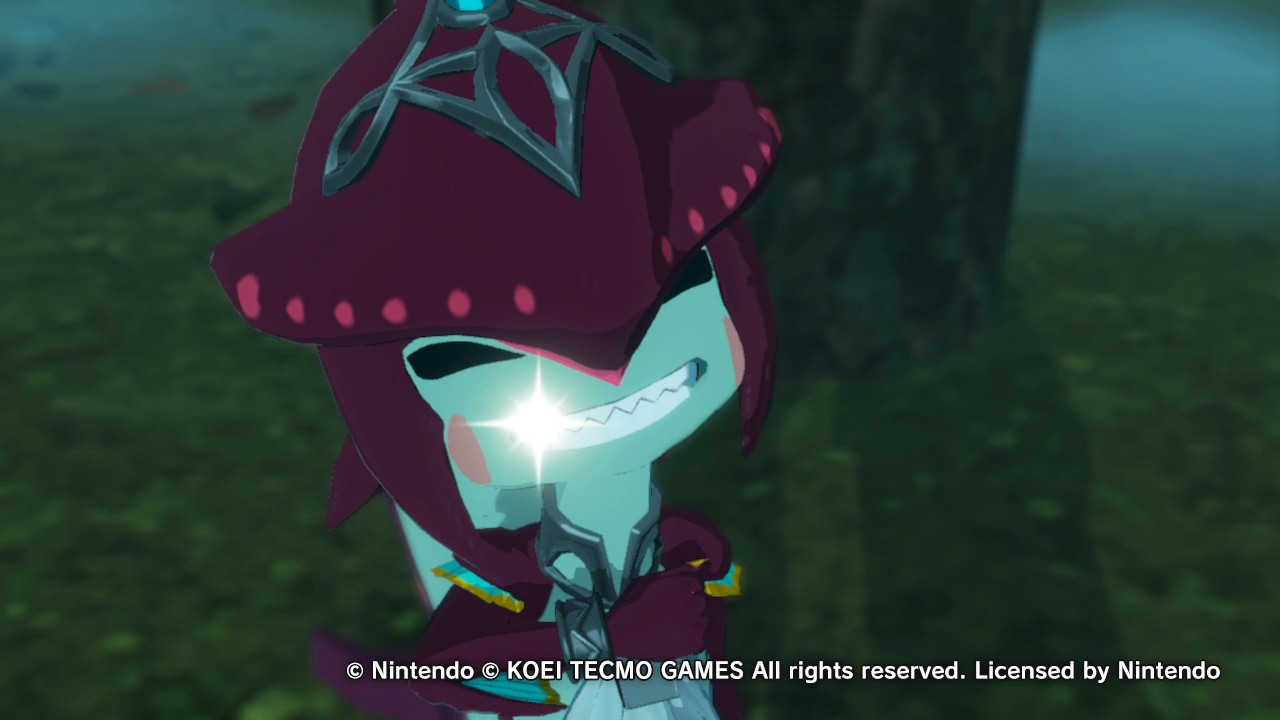 I suppose it sort of feels like Hyrule Warriors: Age of Calamity is a dream game. It’s the ideal of what people might want to happen in The Legend of Zelda: Breath of the Wild’s world. You’re given free rein over multiple characters from this installment, each with their own sort of playstyle and capabilities. You get to see the world at a time when Hyrule was mostly doing well. Or, at least, in this prequel it’s in a slightly better place before Ganon won. There are even story elements that present something a bit idealized. Which fits in with the general wish fulfillment the Hyrule Warriors series provides, given that they’re all-star affairs.

Which is really what anyone can and should expect from Hyrule Warriors: Age of Calamity. It is drawing from a beloved series, as the original Hyrule Warriors did. It gives us a new way to play and, in so doing, opens up new options. It isn’t going to be for everyone, but it does a lot that some fans of The Legend of Zelda: Breath of the Wild will appreciate. It isn’t for everyone, but it is interesting.

Hyrule Warriors: Age of Calamity is available for the Nintendo Switch. A demo is available.

Join the struggle that brought Hyrule to its knees. Learn more about Zelda, the four Champions, the King of Hyrule and more through dramatic cutscenes as they try to save the kingdom from Calamity. The Hyrule Warriors: Age of Calamity game is the only way to see firsthand what happened 100 years ago.
8