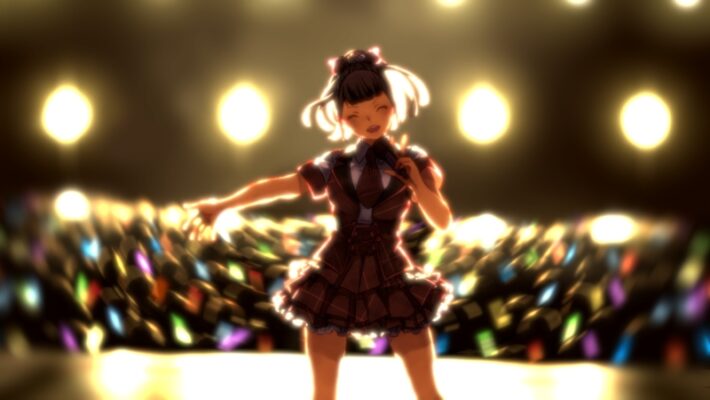 Considering that the usual concept of an “idol” focuses quite a bit on song and dance, it should be no surprise that most idol games are music games of some kind. Idol Manager, from developer Glitch Pitch, isn’t most idol games.

Instead, it focuses on the “industry” part of the idol industry. It doesn’t put players in charge of a single idol or even a whole group. Instead, Idol Manager puts players in the business suit of an up-and-coming producer running a brand-new idol agency, out of an empty building heavily implied to have once been a brothel.

And from these humble, shady roots will spring the next generation of world-shaking talents. And only women, unfortunately, as by default Idol Manager doesn’t allow you to run a male or mixed-gender operation.

At the core of Idol Manager are, of course, the idols. These are NPCs that are procedurally generated by the game, with randomized faces, personalities, and appearances. Players can tweak a few things here and there, such as editing hairstyles and nicknames. For the most part, though, each idol feels deliberately generic. It’s kind of like the randomized squaddies one gets in a typical game of XCOM. Each also has their own set of attributes (like cuteness), goals (like being in center position during a concert), and quirks (like a complete lack of shame). 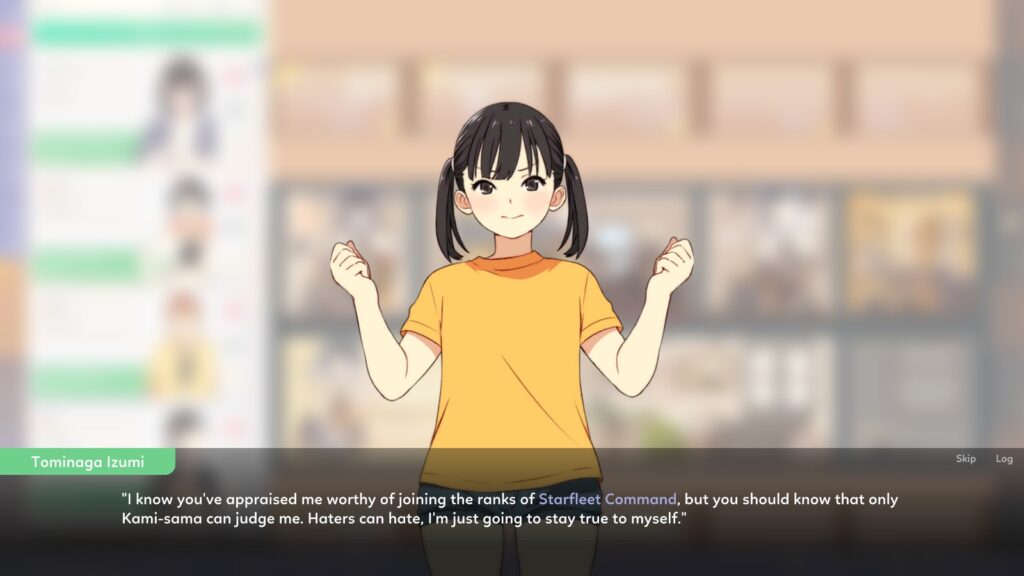 All these parameters help the idols of Idol Manager feel more like individuals rather than simple tables of stats. That being said, after a few rounds of auditions, I felt like I had seen the limits of the game’s character design variety. There’s little variation to the idols’ faces, or even default skin tone. The non-idol staff feel even more interchangeable, getting a single sprite each.

Players will build out their Idol Manager agency with a mix of facilities. My beginning unit, Starfleet Command, needed an office for me and another office for my production assistant. We also needed a recording studio to put together my group’s tunes, and a dance studio to keep them practiced and work on choreography. I later splurged on a break room to keep them rested and a dressing room to help them doll up between gigs. All of those rooms need staff to operate them! Which, of course cuts into the budget. 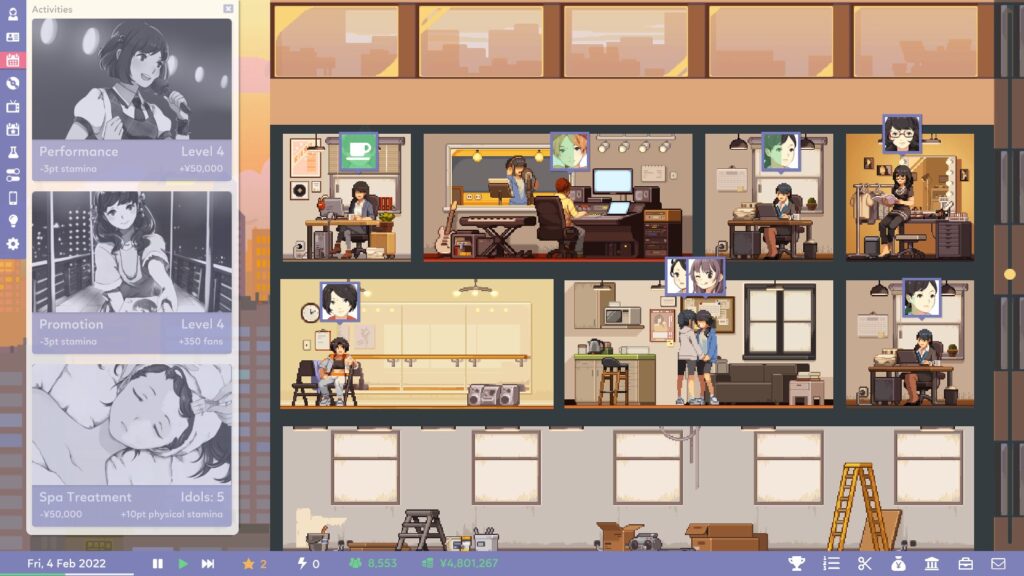 And the budget is everything. Glitch Pitch was not kidding when it added a caveat to the default difficulty level, noting that most players will take some time to work out a sustainable playstyle. Despite a hefty initial investment from my benefactor, my first few runs of Idol Manager were disasters. I bankrupted my company multiple times, often spiraling into debt as my idols struggled to sell even a dozen copies of their awful singles.

I eventually found a groove, and took Starfleet Command further up the charts towards stardom. That’s where the magic of Idol Manager started to take hold. Glitch Pitch has done a great job of expressing, through the game’s mechanics, just how much work and “hustle” idols need, even for mundane activities. 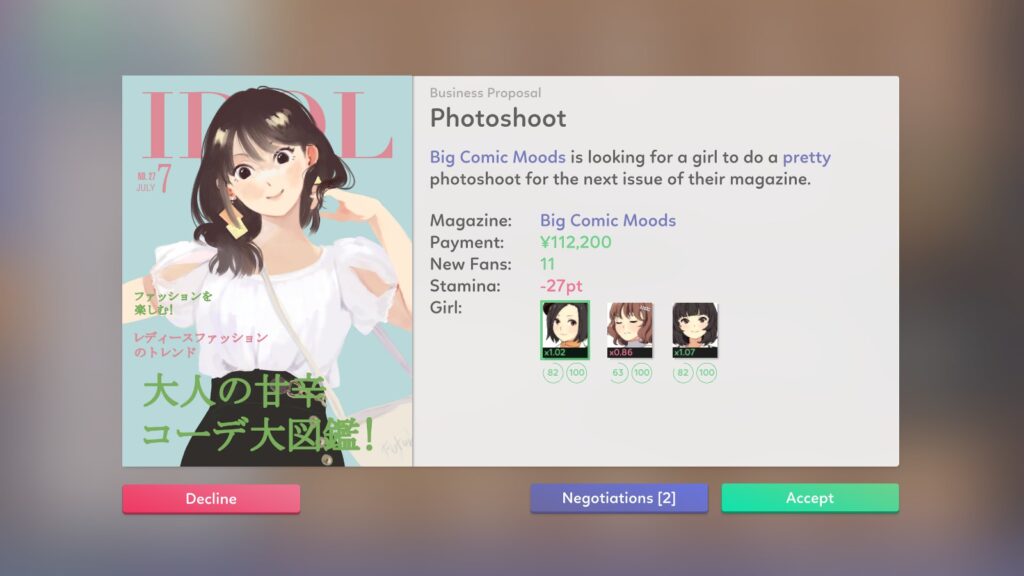 Just releasing a single song is a multi-step endeavor. It involves composition, choreography, production, marketing, and even a bit of prophecy, as you scour the sales charts and trend indicators trying to find a winning formula. You have to queue all those tasks up, one by one, with your different staffers to get them done. And all the while maintaining the routine of daily maintenance and performance.

Let’s not even get into trying to throw together a concert, an ad campaign, or launch a show. All these things just scratch the surface of what idols do to make their daily bread. I doubt anyone will come away from a session of Idol Manager thinking that real-life idols don’t work very hard. 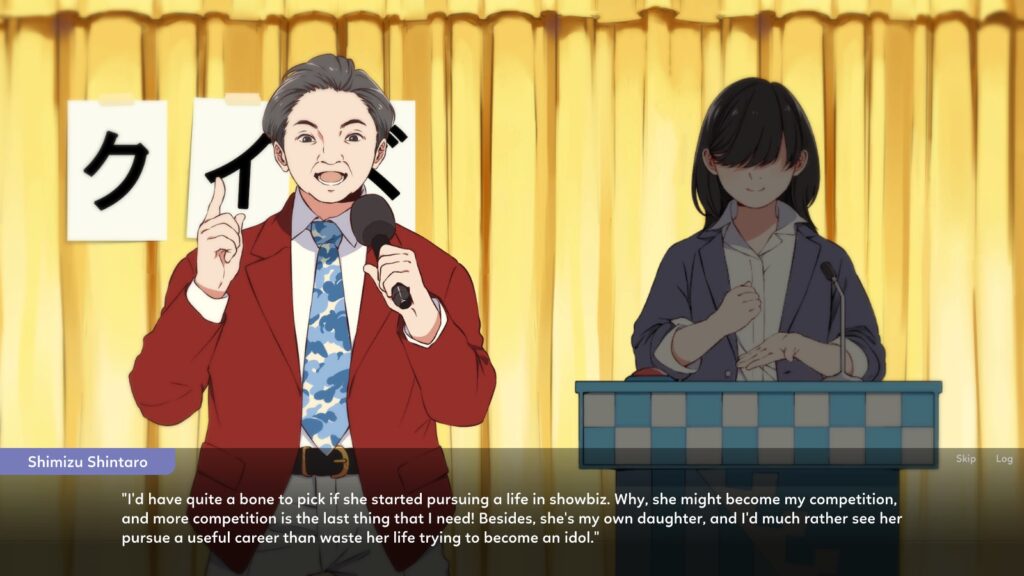 It’s not all budgets and moneymaking, though. Idol Manager plays with its social and personality aspects in some clever ways. You can interact and socialize with your idols to get to know them better. You can even date some of them! Though you risk scandal doing so, or worse, lose the trust of your idols, if you make an unwanted romantic overture.

Idol Manager also keeps things spicy with bits and bobs of narrative. The Story Mode includes a start-to-finish plot, anchored by a few pre-built characters and events. But even in Free Mode, minor events will pop up, often presenting players with a decision to make or a dilemma to solve. Things like whether to spend extra to put one of your older idols into special physical training to help her keep up with her peers’ more youth-oriented choreography.

Even infamous scandals can pop up from time to time. This tests not just your agency, but your stance as a player. Should you stand by your idols if they get caught on a date, despite your agency’s no-dating policy? The content can get somewhat dark, and for the most part doesn’t shy away (too much) from acknowledging the seedier side of the scene. 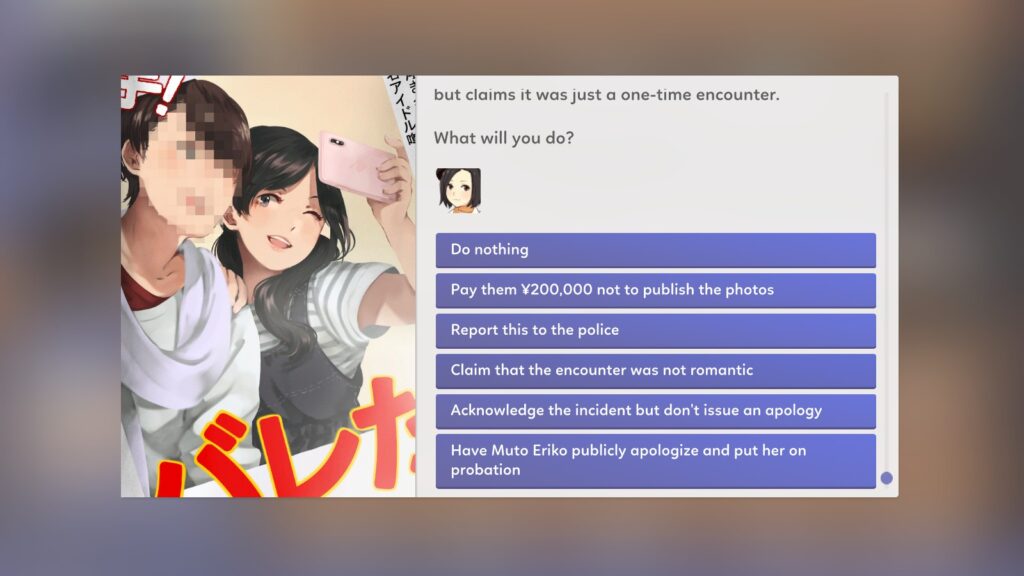 Just like how the idol industry has its own rougher, darker, uglier side, Idol Manager isn’t without its own flaws. The game operates in a real-time style, but the UI lacks feedback and some tools that would make it easier to keep up with the blizzard of tasks that pile up. I frequently forgot to keep my idols working on a daily basis, partly because it wasn’t always clear that the day had rolled over. I’d have also appreciated more notifications or ways to manage the progress of multiple projects at once, without manually flipping through to their screens one by one.

Further, there are some features of Idol Manager that I’m not quite sure are working correctly. For example, idols have a mental stamina stat that’s separate from physical stamina. According to the tutorial, mental stamina is supposed to drain when an idol works with insufficient physical stamina. In theory, it’s a clever mechanical expression of the mental toll of overwork! But never once, on any difficulty, did I see an idol with less than perfect mental stamina. It never went down a single point, no matter what they did. 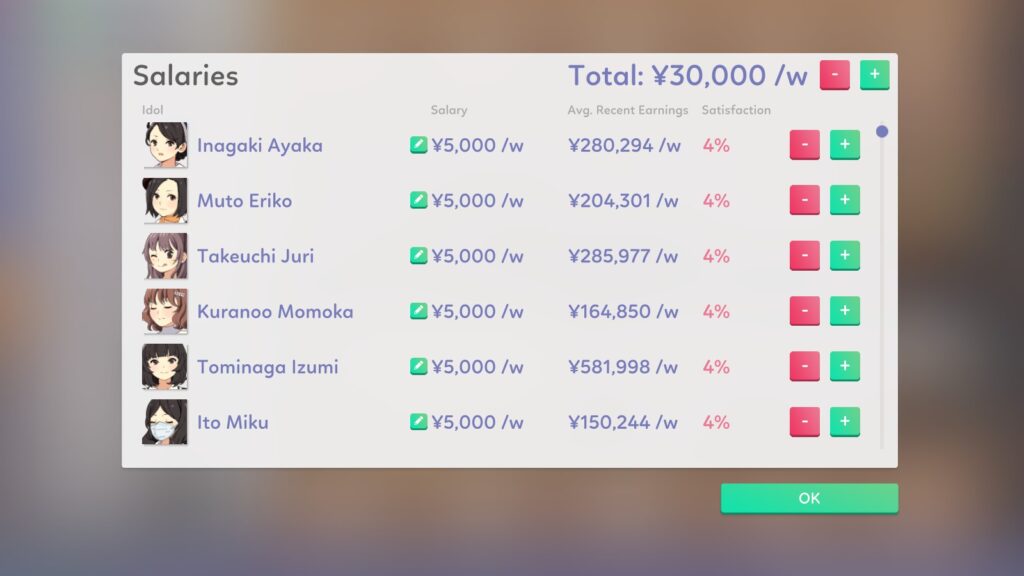 Similarly, the game didn’t react when I decided to become a true, exploitative monster of a boss. Idols have a satisfaction rating influenced by their salary. I tried dropping it to a pittance, and their satisfaction dropped to near-zero levels! But I faced no consequences for my deeds, other than an occasional pop-up telling me an idol was unhappy. Nothing else seemed to happen. My Starfleet Command went on world tours and marathon concerts, all making about 5,000 yen per week.

Though these balance and pacing issues are substantial, they’re not deal-breakers. Assuming they’re bugs or issues I encountered over the pre-release review period, they seem like they can be patched quickly. Further, Idol Manager also offers full mod support. Even now intrepid players have added new assets and tweaks to the game via the Steam Workshop feature. It’s possible that with time, many of the issues will be ironed out or improved with the assistance of the game’s community. 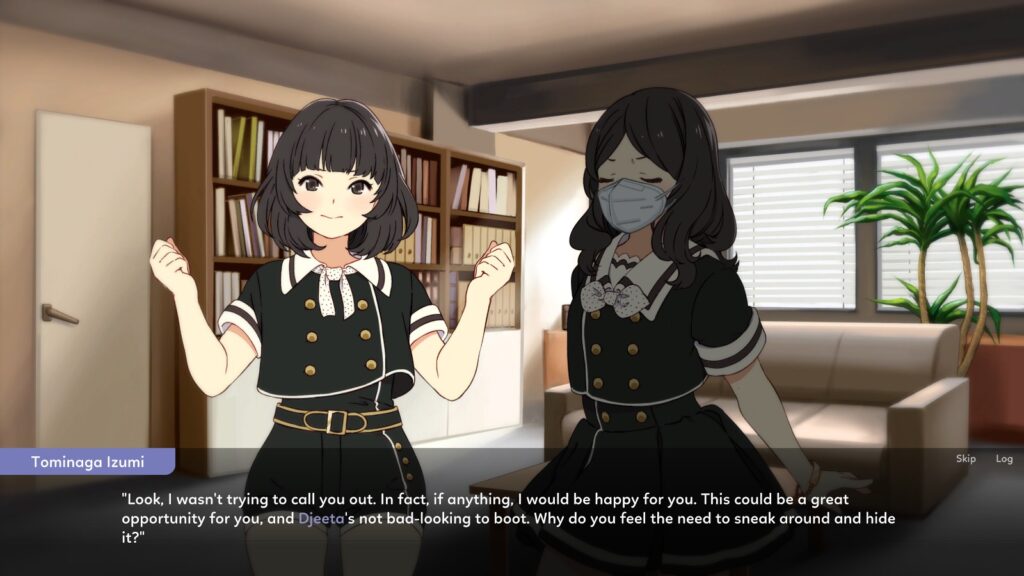 Despite some rough edges and some undercooked mechanics, Idol Manager remains a unique game and a fascinatingly novel take on the idol industry. If you’re a fan of business sims with a taste for interpersonal affairs? Get ready to become producers.

Idol Manager is available now on PC via Steam. A Nintendo Switch version is in development.

Manage a pop idol agency from the ground up in true business sim style. Players will hire idols, train them, get to know them, and keep them happy while climbing the charts and conquering the entertainment world.
7

Glitch Pitch's Idol Manager is an engrossing industry angle on what it's like to compete in the Japanese idol scene, but stumbles a bit in the spotlight.