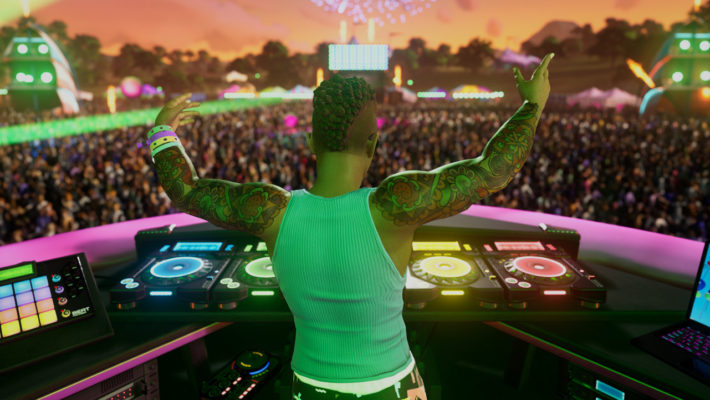 If there’s one thing Harmonix always gets right, it’s the vibe. Whether it’s Rock Band or Dance Central, Super Beat Sports or DropMix, the studio’s games feel distinct and cool from the jump. Fuser, Harmonix’s latest work, is no exception. Does it have the staying power to match, though?

In Fuser, you take the role of a DJ at a music festival, mixing pieces of popular songs into your own original creations. There’s a clear connection to DropMix, Harmonix’s previous music-making release. After all, you’re putting music pieces in color-coded slots! Many of the base tools for that are going to be similar. What’s different, at a fundamental level, is the platform. Rather than physical cards and plastic accessories, Fuser is a self-contained console and PC release. This means that both how you play and how many songs are at your fingertips are very different.

Simply put: there’s a lot. Which is great, in some ways! Fuser‘s particular brand of mixing becomes exponentially more interesting and creative with every song you add, and even the included base set of tracks offers a lot more variety than you’d expect. A lot of care and attention was put into these choices, essentially giving you a DJ’s DJ and handing you a lot of curated, well-suited elements. There’s some fun stuff, like meme songs. There’s some iron-clad, popular songs with the best beats and riffs in the business. And there’s some weird old country and hard rock to pepper in as you’d like. It’s a nice offering. 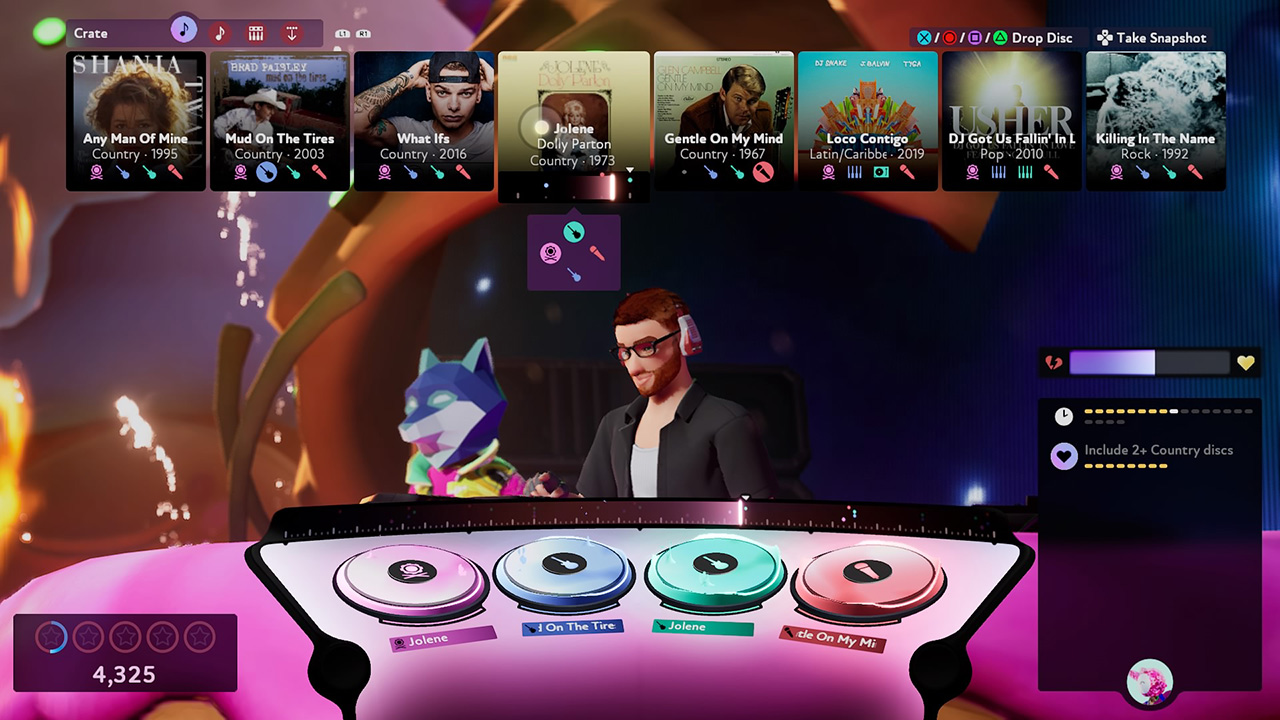 But the “a lot” plan doesn’t always work in Fuser‘s favor. There are a lot of tools and interfaces to understand, and the campaign mode is entirely devoted to explaining them. Look: it needs it. It was probably the right call. But it’s fundamental to understanding Fuser to concede that all this power and control comes at a cost to approachability. It’s an intimidating tool, and the modes and scoring are all geared toward pushing the limits of your skill rather than letting you relax and enjoy making a cool mix.

First: the campaign and competitive modes’ approach to scoring. The way to do well in Fuser is to respond to requests, sure. It also demands that you constantly change the mix, though, and doesn’t stop to smell the roses. Virtually without fail, the thing you should be doing to get a good score is dropping a new piece into the mix as fast as you can grab it and hit the pickup or downbeat.

There’s some attempt to defuse this tension a bit, through the personalities that host the campaign. Different DJs guide you along each chapter, and they’re there to both introduce new elements to mixing and show you new ways to enjoy playing. They’re definitely a benefit to the experience, though there’s only so much they can distract from campaign flaws. 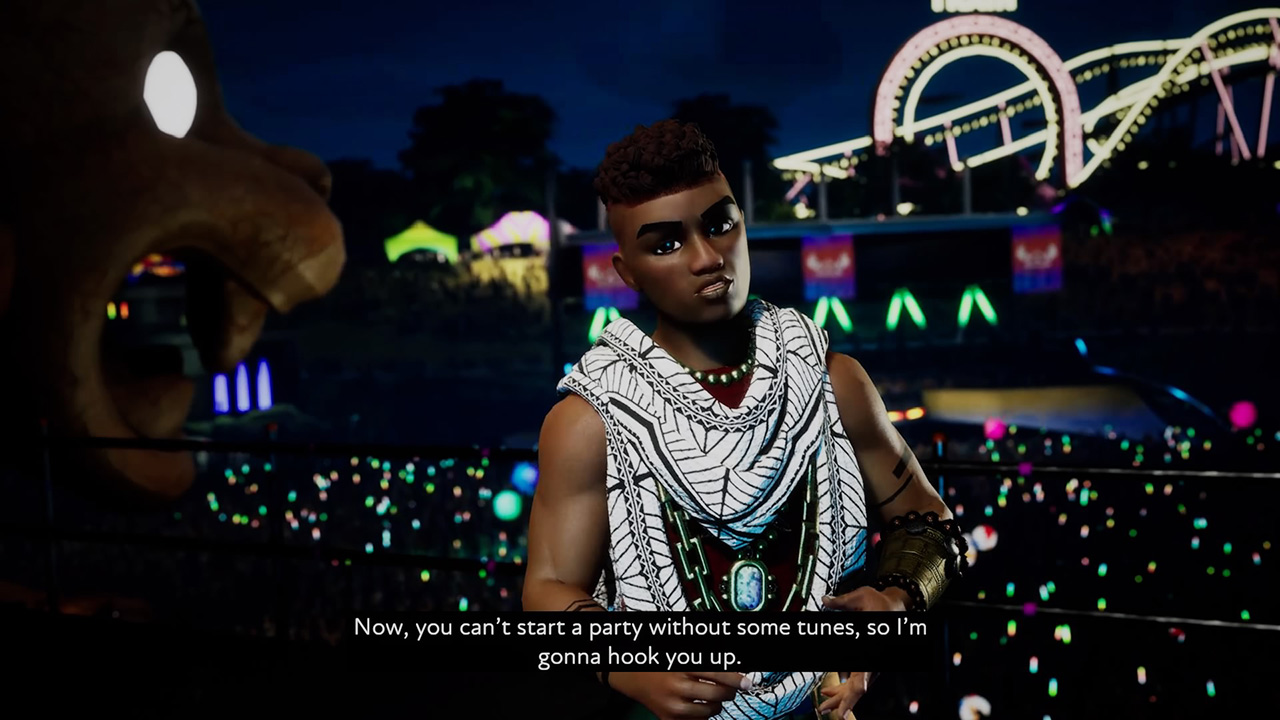 As a tutorial, the campaign is fine, and a test to make sure you’re as adept at the controls as the game wants you to be. Once you’re through it, though, you’ll probably be done with the concept. Unlike Rock Band, Fuser won’t be a game about score-chasing. And the music you make in both the campaign and the head-to-head battles is… well, it’s not good. You’re not given the time to make good-sounding music, and you’re also not incentivized to try.

That sounds like a lot of complaining. And it is! But these choices do lead to a payoff. Fuser is a thoroughly robust tool for experienced players, and through the co-op and mix sharing tools, they can take advantage of that mastery. This part isn’t necessarily perfect either. The round-robin Freestyle Co-Op mode feels very short and anticlimactic without a group of at least four, as each player is given a short segment to mix and a lot of the mode is built around audience reactions. What’s more, during the pre-launch period, we found a lot of server functionality issues that haven’t yet been ironed out. Still, when these work — and we assume that’ll be most of the time once things settle — they’re really interesting collaborative platforms.

Fuser‘s technical aspects are somewhat peculiar. It doesn’t push a lot of hardware capabilities, which makes sense. After all, it’s a multiplatform, old-gen release that also wants to run on the Switch. (And Harmonix has always been about aesthetics over pushing tech specs.) Still, for a game that can send a console to jet engine fan levels, it sure makes low-resolution PNGs super-big on the screen a lot. It seems like resources were put into the background “stage” elements, which either fade from notice after a while or become a bit intrusive. 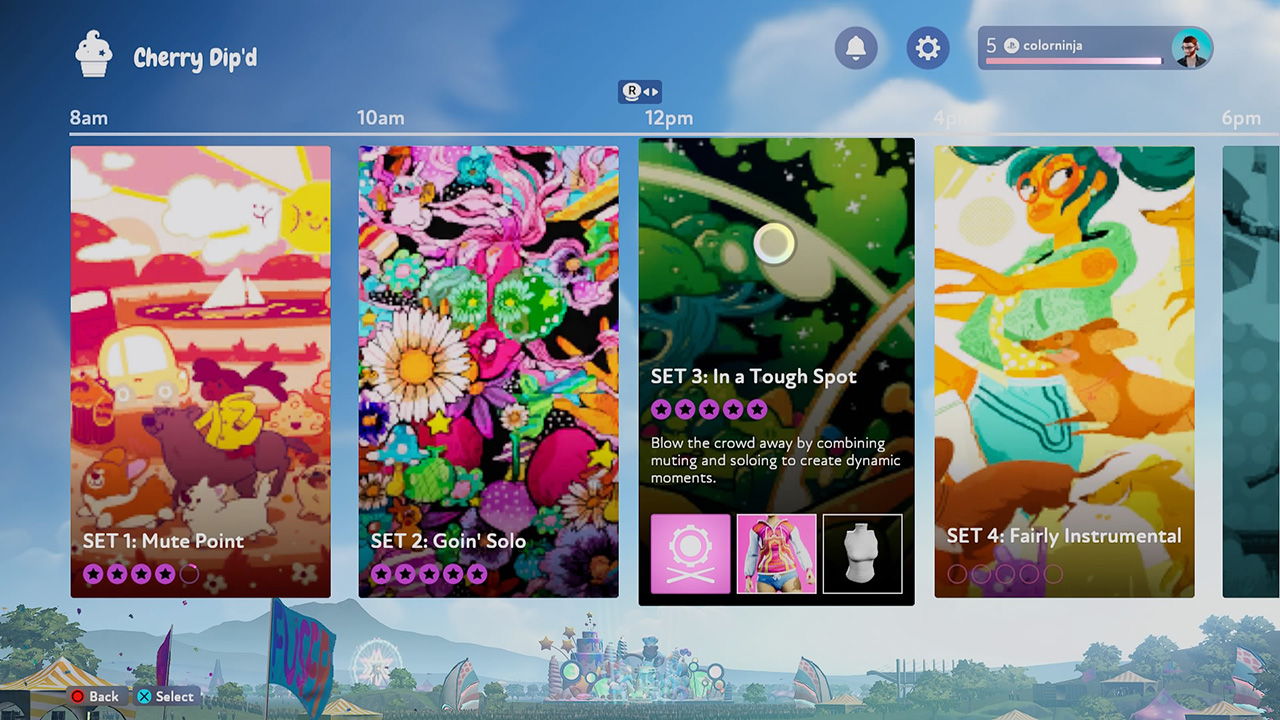 Still, what matters most is the music, and music is what Harmonix has always done best. It’s not the most polished or accessible release from the team. Even still, it delivers on making some fun mashups. It feels genuinely cool to play under the right conditions, and those conditions aren’t too hard to manufacture.

Fuser, developed by Harmonix and published by NCSoft, will release on November 10, 2020 on PlayStation 4, Xbox One, Nintendo Switch and PC.

From the creators of Rock Band and Dance Central comes Fuser - a nonstop virtual music festival where you control the music! Combine elements of the world’s most popular songs to create your own sound or partner with friends on epic collaborations, then share your amazing mixes and headlining performances with the world! PlayStation 4 version reviewed.
7