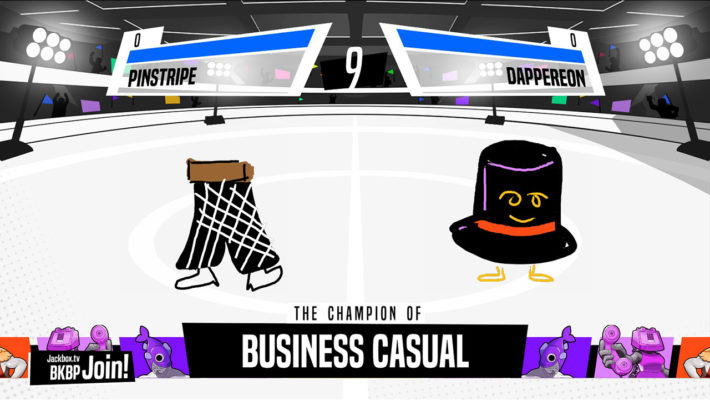 Never has the world needed Jackbox Games’ library more than it has in 2020. Sure, it’s been fun to play in the same room and through streaming for the past six years! But with so many needing more social interaction with friends and family and only being able to do that remotely, now is a great time for a fresh Jackbox Party Pack.

It’s a good thing, then, that The Jackbox Party Pack 7 is decidedly solid.

There’s a lot of places you can go to learn about how these games are for popular streamers with huge audiences, so this review focuses on the average person’s experience playing with small and medium groups. Still, we wanted to note the increased moderation features and included accessibility options. These are nice to see! Especially because the ones who need them don’t make up a huge segment of the audience, and not all developers would make the investment in these tools. It’d be nice if more of these were possible to set globally rather than having to head into each game and make these choices, though. 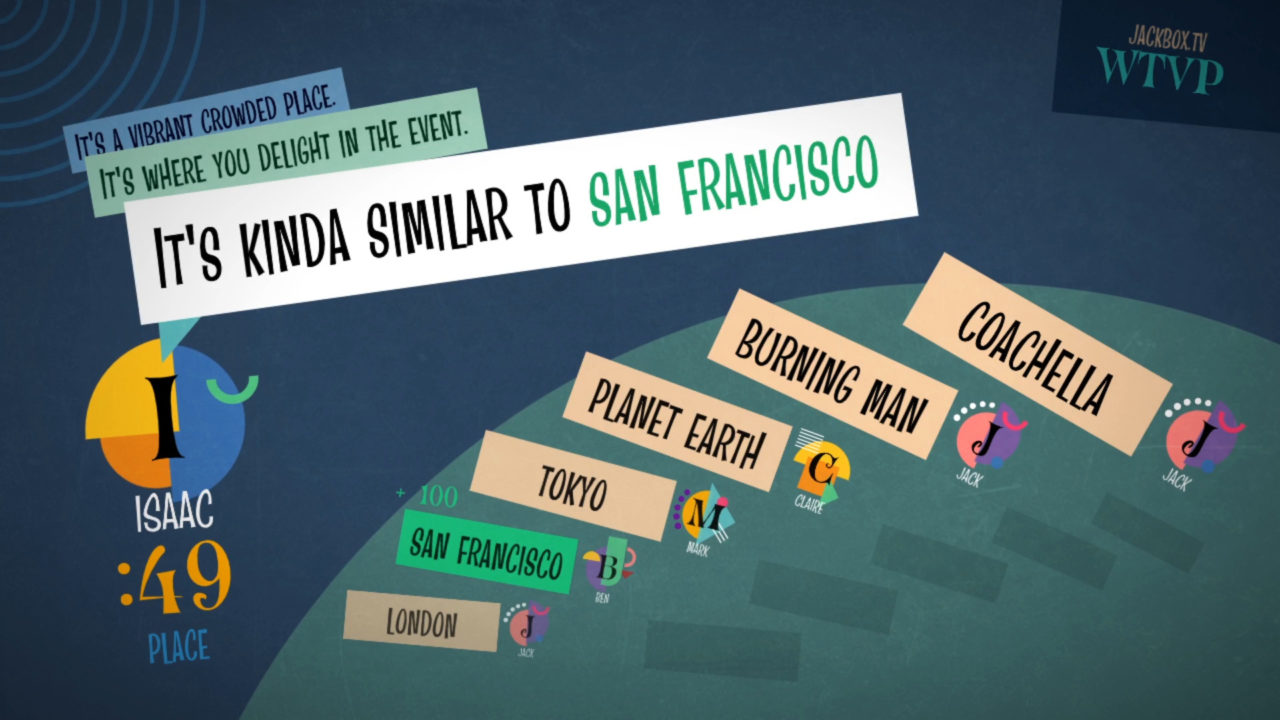 The new word game in The Jackbox Party Pack 7, Blather ‘Round tasks players with giving clues for prompts with a limited selection of words to insert into pre-made sentences. While many word games are polarizing in groups of varied ability, Blather ‘Round levels that playing field. Instead, it’s a game about picking the right options and leading other players to the right answer.

It feels particularly good to win a round. While it’s still a game with individual scores, players are incentivized to collaborate and seek an answer. It’s also, and this is a lot harder, fun to lose. It can feel a little bad to fail to guide players to the right clue, but most of the time, there’s a lot of laughing to go around. 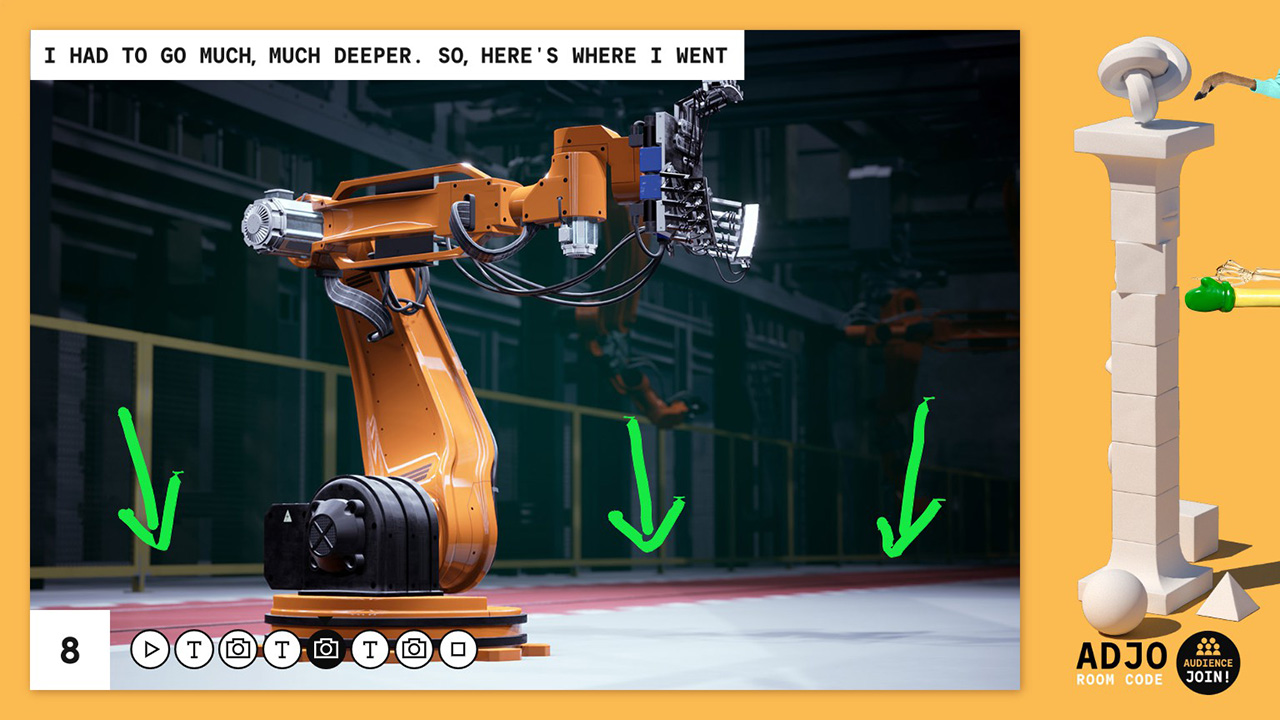 This presentation game, which feels like an evolution of Patently Stupid, could be the most hit-or-miss game in Party Pack 7. In it, you’ll be tasked with giving a presentation to other players, but your script and photo slides are chosen in real time by someone else. It’s easier to play, for sure! There’s no mandatory drawing, and it’s about adapting to what you’re given rather than up-front creativity.

Players will need to be comfortable with what’s basically an improv competition. If someone in your group isn’t feeling it and starts to phone in their parts, it can really weigh things down. Still, this format allows for some of the highest highs of the pack. If players can build extended routines successfully, they can lead to lasting laughs. 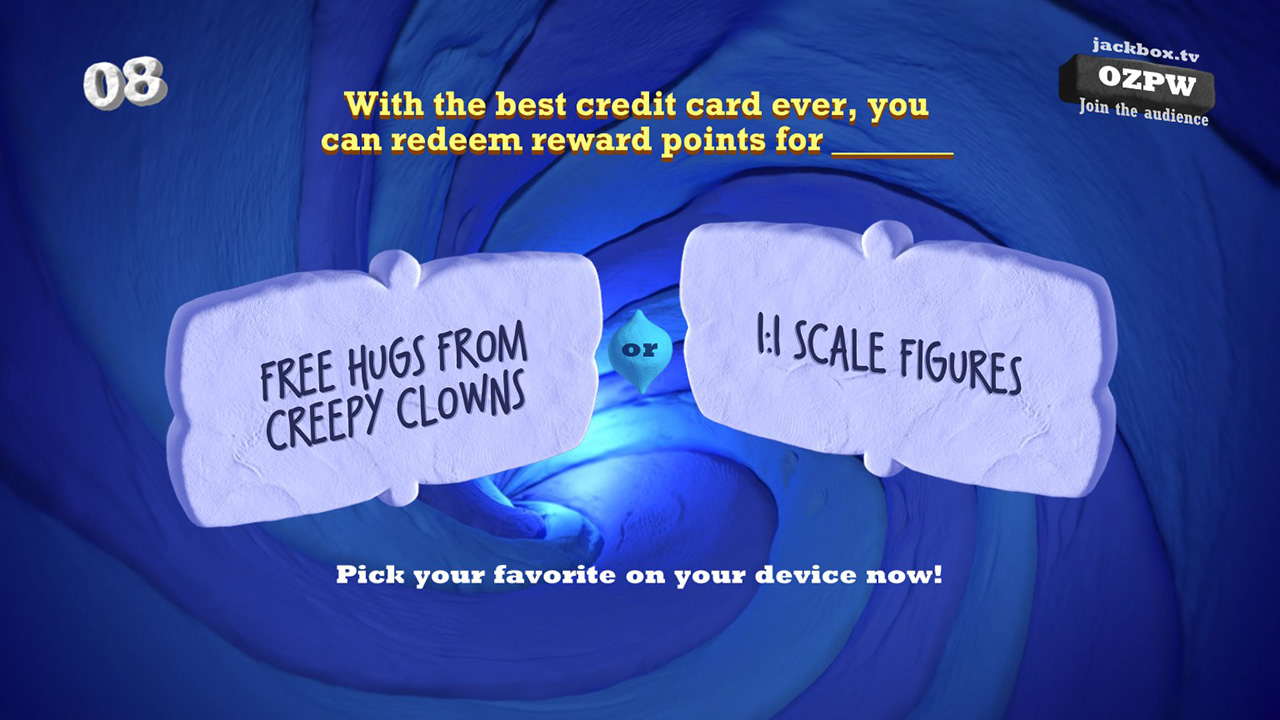 Okay, we’ll give you a little more than that. Each Party Pack tends to offer one safe, reliable iteration, and Quiplash 3 is this one’s. The biggest change is the new final round, Thriplash. In it, you’ll give a three-part answer, with the possibility of fun sequences and cadence. This works better than the old ones, which were dragged down by things like lame comics.

It looks nice, too! In fact, the whole pack delivers on its aesthetics, but the clay-based look of Quiplash 3 makes it feel more like a new game than a quick update. 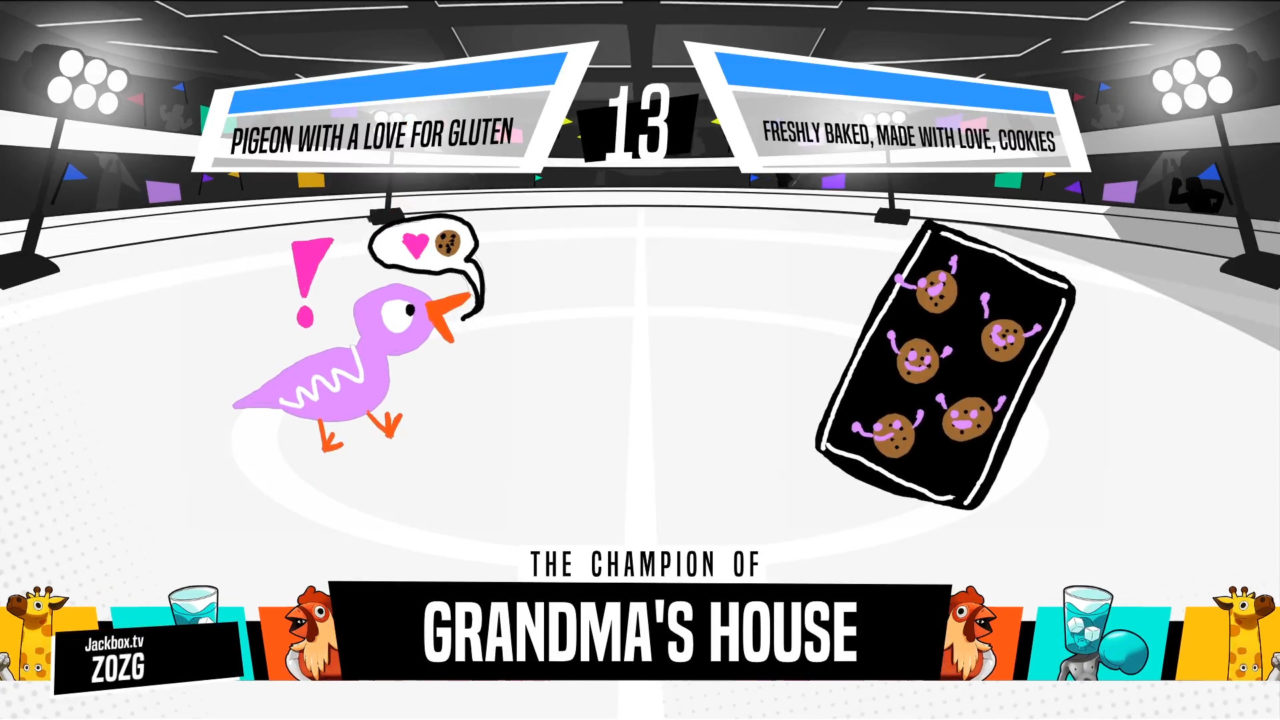 Every installment has to have a game with drawing in it, and The Jackbox Party Pack 7‘s is Champ’d Up. In it, you’ll craft “champions” of various concepts. Then you’ll match them up against “challengers” who can see your creation when they draw but not the category. Since only one of the players knows the prompt and only the other knows their opponent, it both leads to hilarious match-ups and gives both players plausible deniability for the results.

It feels like Champ’d Up was made to be a drawing game that is less based on drawing skill. Instead, it’s really about your concepts and creativity in character design. Still, to test how broken this can get, we played with a professional animator who is incredible at both of these things, and the rest of us normal folks still had a blast playing along. 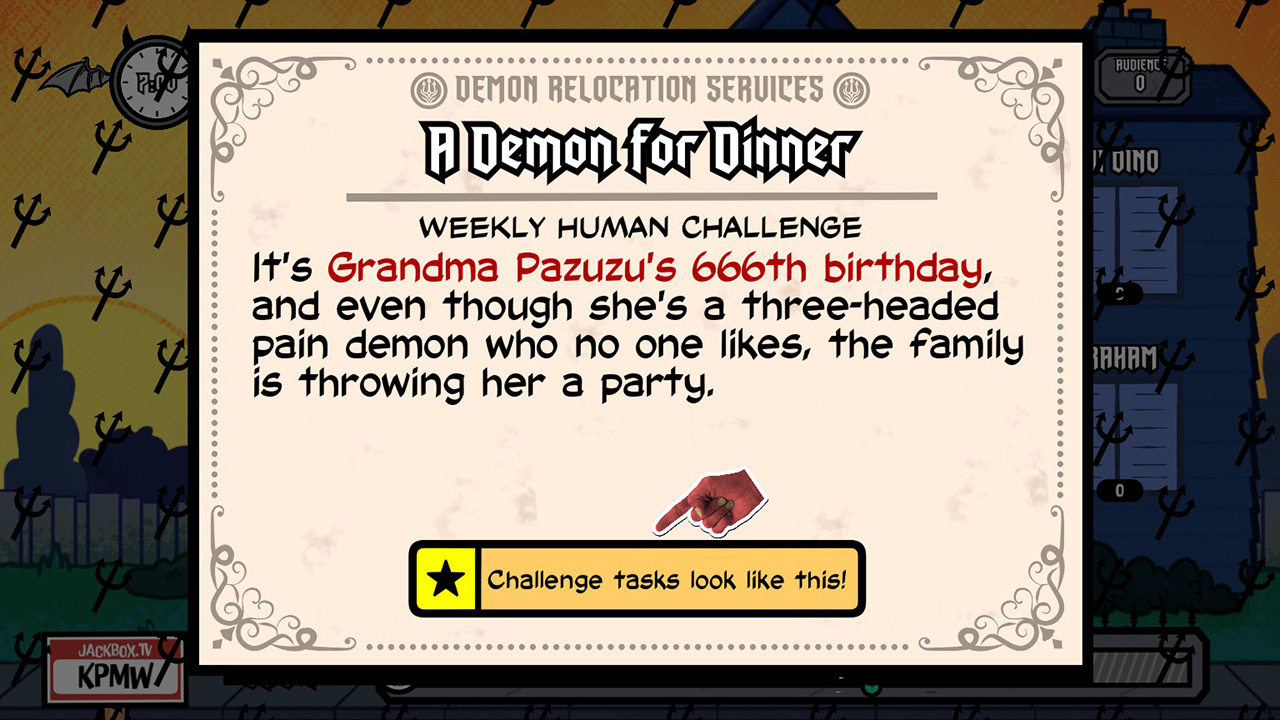 The Devils and the Details

If there’s one word to describe The Devils and the Details, it’s this: frantic. In this game, you’ll complete little microgames, each feeling similar to those in Among Us and WarioWare. This is framed with an amusing conceit: you’re a family of devils hiding in suburbia, trying to maintain your human-like cover. Tasks — some individual, some cooperative — contribute to your individual score and, in varying amounts, a collective success meter. You have to fill the meter enough or everyone fails, but “selfish” tasks give you a lot more points at the expense of the group goal.

This game probably benefits the least from remote play. While it’s fun to collaborate in the same room and chat with all the different players as you work together to gather ingredients for food or navigate a driver to destinations, the cross-talk of a call can get a bit tough to decipher. Still, it’s a very different sort of option in the Jackbox Party Pack library, and an improvement over some of the ideas that were implemented less successfully in The Jackbox Party Pack 2‘s Bomb Corp. 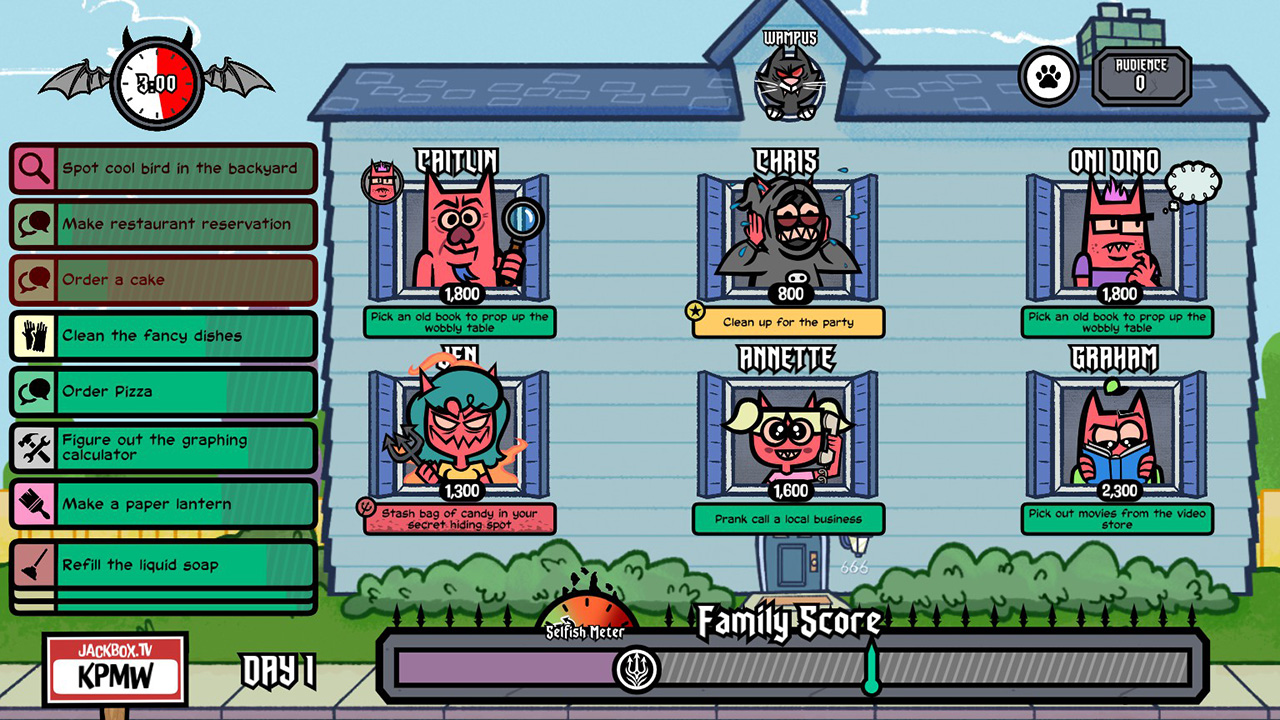 The Jackbox Party Pack 7 feels like another one of these, sure, but it does it with a consistently high quality level that we haven’t seen in a few years. There are no duds (or, perhaps, spuds) in this pack, and each feels designed to lose their charm more slowly than most.

Five new games: the hit threequel Quiplash 3, the collaborative chaos of The Devils and the Details, the fierce drawing game Champ’d Up, the speech game Talking Points and the guessing game Blather 'Round. Use phones or tablets as controllers and play with up to 8 players, and an audience of 10,000! PC version reviewed.
9