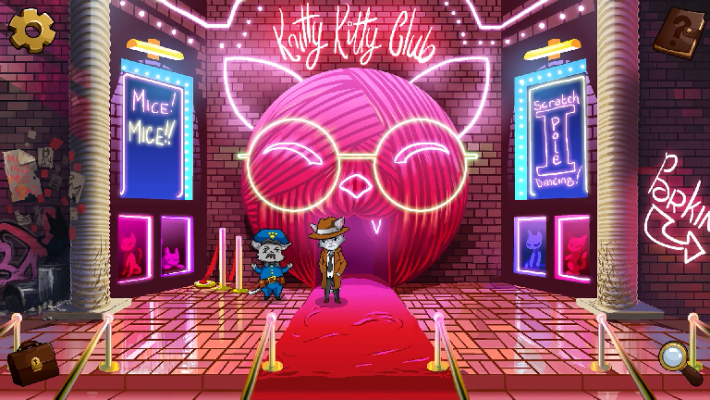 Classic film noir tells tales of cynicism amidst a backdrop of violence and substance abuse, but Silvernode’s adventure game Nine Noir Lives bucks expectations with a fast-paced dialogue and plenty of cat-related puns. There is an impressive amount of text in this indie title. But when it’s not focused its main story, that volume can make it difficult to maintain interest. Like a ball of yarn that a cat has unraveled, all of the strings do eventually lead to the center. But untangling it can be needlessly complex, and a more difficult task than expected because your cat wants to keep goofing off.

In Nine Noir Lives, you play as Cuddles Nutterbutter (yes, that is his name), a detective in the city of Meow Meow Furrington. He receives a job from the police and investigates a murder in the Knitty Kitty Club. However, the victim turns out to be the son of the club’s owner, who also happens to be the head of one of the big crime families in the city. With the help of his trustworthy secretary Tabby, Cuddles has to bring the murderer to justice.

To start with, it is impossible to play the game and not notice something: the art style. It looks incredibly dated. The aesthetic resembles an early 2000s Flash game you would play on your browser. It works, though: The colorful approach to depicting noir fiction is certainly unique, and matches with the game’s extremely quippy and snarky dialogue. 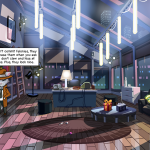 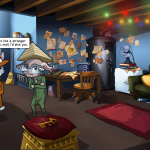 Cuddles is a very interesting protagonist for a film noir-inspired game because he lacks the hardboiled cynicism most detectives in noir have. He is more of a smart-aleck type, like Andy Samberg’s Jake Peralta as opposed to Raymond Chandler’s Philip Marlowe. He always has a snarky joke or observation for every weird situation he finds himself in. Unfortunately, so many characters have that same sarcastic or lampshade-hanging humor, so Cuddles’ constant quipping can start to get grating.

I did not think twice about the game using symbols instead of numbers or characters having stereotypical ‘pet’ names like Cuddles or Gumdrop. But the game refuses to let you suspend your disbelief, going out of its way multiple times to point out how ridiculous these are. Nine Noir Lives can’t quite seem to let this self-aware strain of humor go long enough to let the jokes breathe.

But then why are they like that? Why not just have Tabby or Cuddles say something like “Oh, it’s so hard using symbols in an emergency!” and leave it at that? Instead, Tabby rants like she was recording for a YouTube video. This kind of humor is not bad in and of itself. However, it works the best when a single character acts as the sane man who points things out while the other characters take it in stride. Instead, it’s everyone, and the jokes can’t land when the cast is constantly pointing out how they jokes won’t land.

Almost no one can go two lines without exercising their biting wit. Even the safe you have to unlock insults you nonstop. I did not get past the first area you investigate and I was already sighing to myself. 30% of the game’s writing, when played straight, is amazingly emotional and incredibly engaging. The rest consists mostly of jokes. The game is a comedy-noir but I did not expect the writing to sling out the gags like a parody of Airplane!.

The irreverence at which the characters talk can make it incredibly difficult to remain invested in the story. If no one sounds like they want to be here, then why would I? The situation ameliorates when you start to really get to the bottom of the mystery and things get serious. When the writers take off the kid gloves and show their claws, the dialogue is amazing. But these moments are too little, too late. 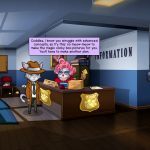 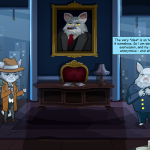 However, to say that the writing of Nine Noir Lives feels like that of a Marvel movie would be a disservice to the game. There is a truly extraordinary amount of dialogue in the game. On top of that, every line is voiced. Every item you show a character will garner a specific reply. Even if the majority of the replies essentially boil down to ‘I don’t know,’ there is a unique voiced line for each item. To Tinkle, the cake crumbs and coin mean absolutely nothing. But instead of simply giving a generic ‘What’s that?’ response, he actually changes his reply depending on if you show him the crumbs or the coin.

This staggering attention to detail is not limited to the NPCs. Cuddles has three actions he can perform on items in the environment: Look at, Use, and Lick. Performing each item garners a unique (voiced) line. Instead of simply saying ‘Ew, I don’t want to lick that,’ he rejects licking a puddle in an alleyway specifically because he’s worried about germs. He cites germs again when he refuses to lick a random pole outside the Knitty Kitty Club, but the line is different from the one about the puddle. It’s honestly impressive how much time went into the many text chains in the game. The small and self-funded development team’s love and passion for this project shine through in the obvious time and care they put into this.

While the character writing is jaw-dropping, the actual mystery part of Nine Noir Lives is mind-boggling. It never quite approaches ‘moon logic,’ but some solutions are absolutely arcane. You use more than half of your items in bizarre ways with minimal prompting or hints. The game’s fully immersed in an old-school point-and-click adventure school of design, which tends to expect the player to read the puzzle designer’s mind. It’s a bit jarring to see these days, but I imagine older players with nostalgia for those days might get a kick out of it.

As a game reviewer with deadlines, though, I was grateful for some of the hints Silvernode itself provided alongside the review copy. Without them, I might’ve finished Nine Noir Lives around 2030. I left an area so many times only to realize what I needed was in my inventory. I just simply assumed that the item was a clue for later on and thus never considered it. Why would I use an item that might be a clue in a murder investigation to eavesdrop?

Cats may enjoy leaping into boxes, but solving this game requires you to jump out. Flexible thinking and imaginative creativity are the keys to success in Nine Noir Lives.

Stretch your legs, clean your whiskers, and dive into Nine Noir Lives. Enjoy a "point-and-lick" comedy-noir adventure, full of humour, crazy characters, and intriguing locations. A punny detective game with visual novel elements and a surprisingly earnest core beyond its snarky exterior.
6
If you want to know more, check out Siliconera's review guide.