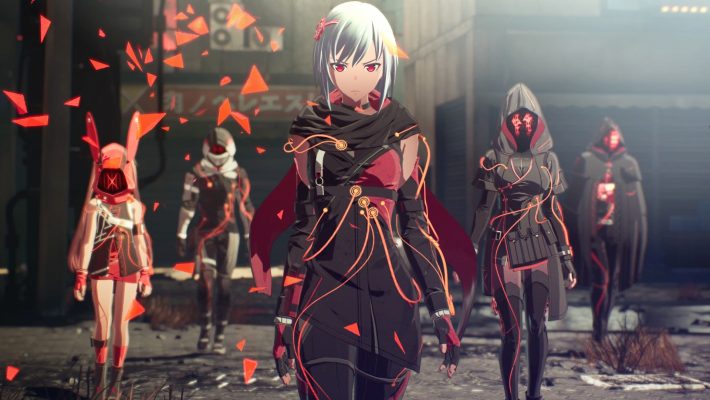 Scarlet Nexus is the sort of game where not only will its combat sell it, but the story and spoilers packed into it will too. It is a title where I was constantly thrown by elements. Sometimes it was an exceptionally clever application of a power. It could be a great enemy design. Or maybe a twist would get me. Even when I wasn’t exactly thrilled with how something might work, I found myself wanting to talk about it.

Games with two protagonists aren’t entirely new, but Scarlet Nexus is one where each person’s side is unique and offers different insights. Both Yuito Sumeragi and Kasane Randall are new recruits to the Other Suppression Force. Each one comes from a powerful family, with the Sumeragis founding a city and essentially and empire, and the Randalls heading up a major corporation. Each has their reasons to fight and people who are important to them. And there are mysteries afoot, like why is Kasane so familiar to Yuito and what happened to Kasane before the Randall family adopted her. 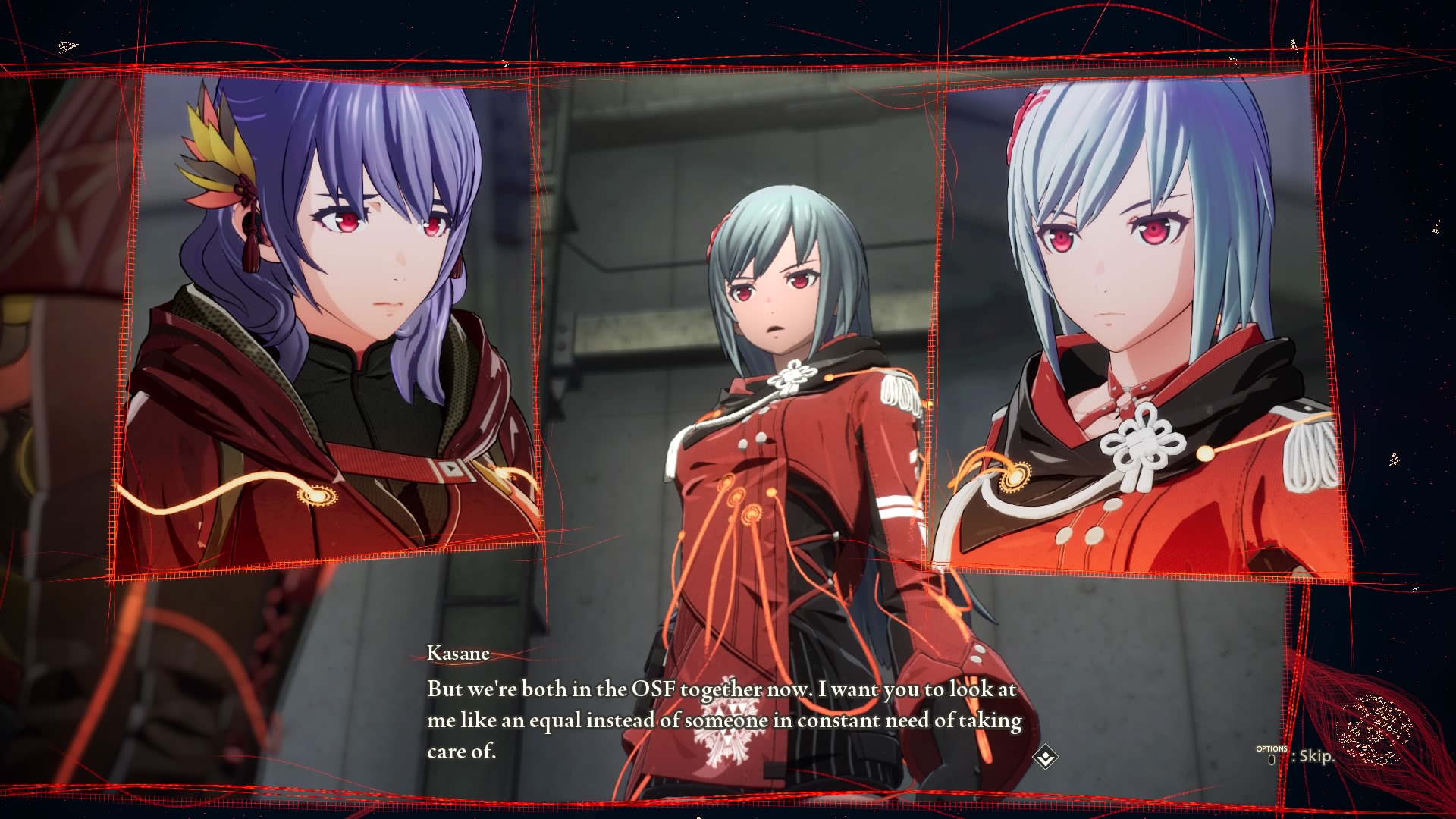 And… I’m honestly afraid to say more than that. The story in Scarlet Nexus is far more complex than I expected, and you start encountering spoilers rather swiftly. I feel it doesn’t have the same forethought as something like 13 Sentinels: Aegis Rim, but this is a tapestry with two sides to it. I went through the Kasane route, before getting into a few phases of Yuito’s story. I feel like of the two, that’s the one that hit the hardest, though everything is intertwined.

It’s interesting, in its way, with the story told in an unconventional manner. While there are some cutscenes, the Scarlet Nexus story is primarily told through static images with talking heads on either side. I’m still uncertain how I feel about it, but it’s grown on me. Given this is a game about superpowers, I considered some of it an homage to comic books. But then, it also fits a bit with the whole telepathy motif. These are people who talk to each other without words, so it struck me that there’s no need for conventional cutscenes and speech at times. 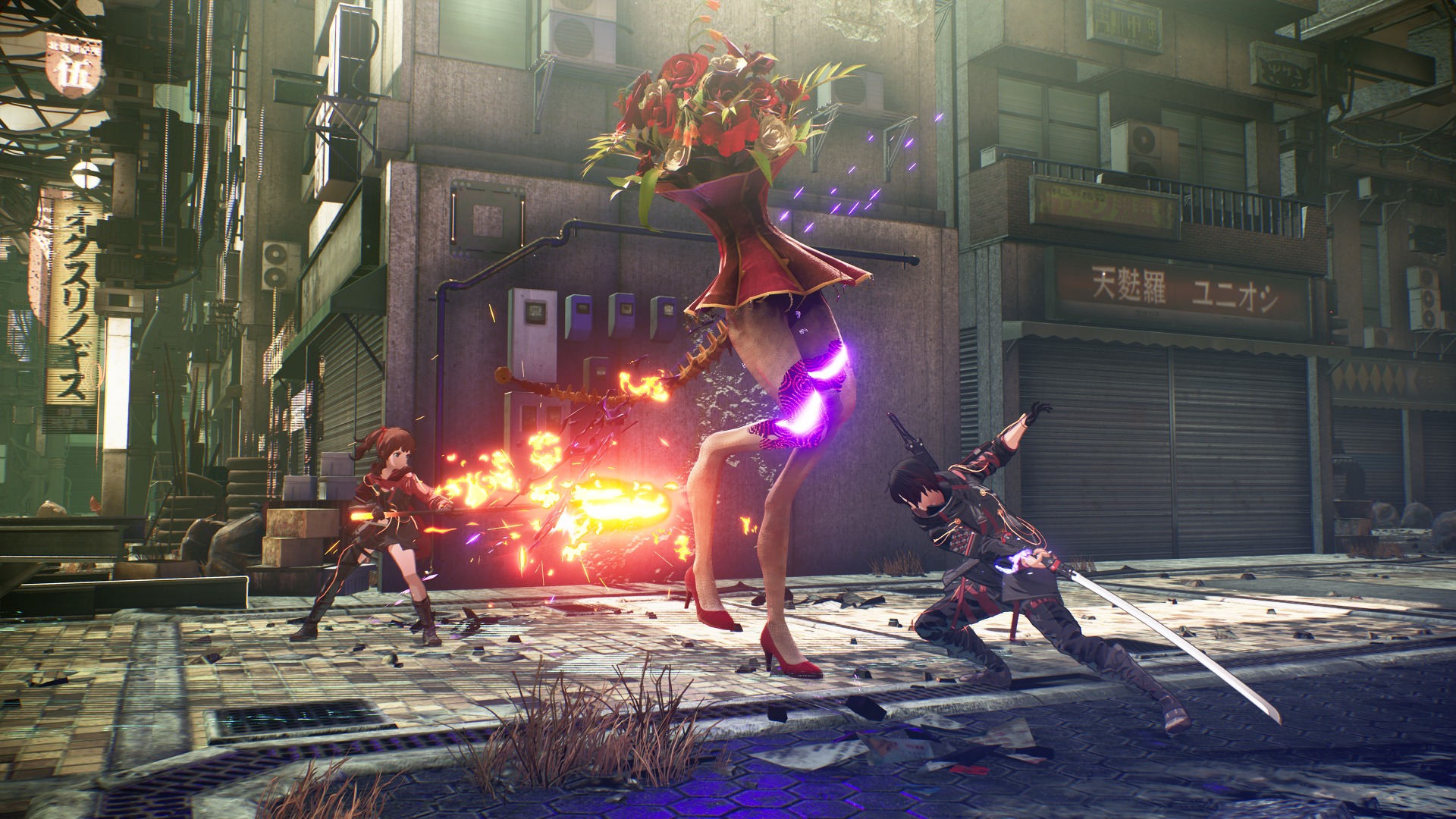 As for the combat, it’s another highlight and surprisingly conventional despite being unique. Scarlet Nexus relies heavily on combos. How can you chain together attacks? What will be the most effective combinations of others’ psionic powers with your own? Which Brain Map path do you invest in to suit your playstyle? How do you weave your psychokinetic attacks in with your ones with weapons? Since there can be a delay before a lifted car hits, you have to consider timing. Also, setting up allies’ AI to suit your tactics is important. And with someone like Kasane, her general attacks even feel great since her knives offer a sense of push and pull to determine her position on the field when she attacks.

It all comes together surprisingly well. While some elements can feel a bit off, for example I’m not exactly sold the accuracy of the double jump sometimes, it fits. You quickly find patterns and Brain Map directions that suit you. Early missions specifically act as tutorials without holding your hands too much, so you get accustomed to how people like Arashi and Tsugumi’s abilities help against specific Others. After a while, I found I’d prefer to have two supportive abilities when I could, like Arashi’s Hypervelocity and Kagero’s invisibility, alongside a more aggressive skill like Shiden’s electrokinesis. Satisfying is the perfect word for when a combination of attacks lets you quickly take down an Other that hours before would give you trouble. 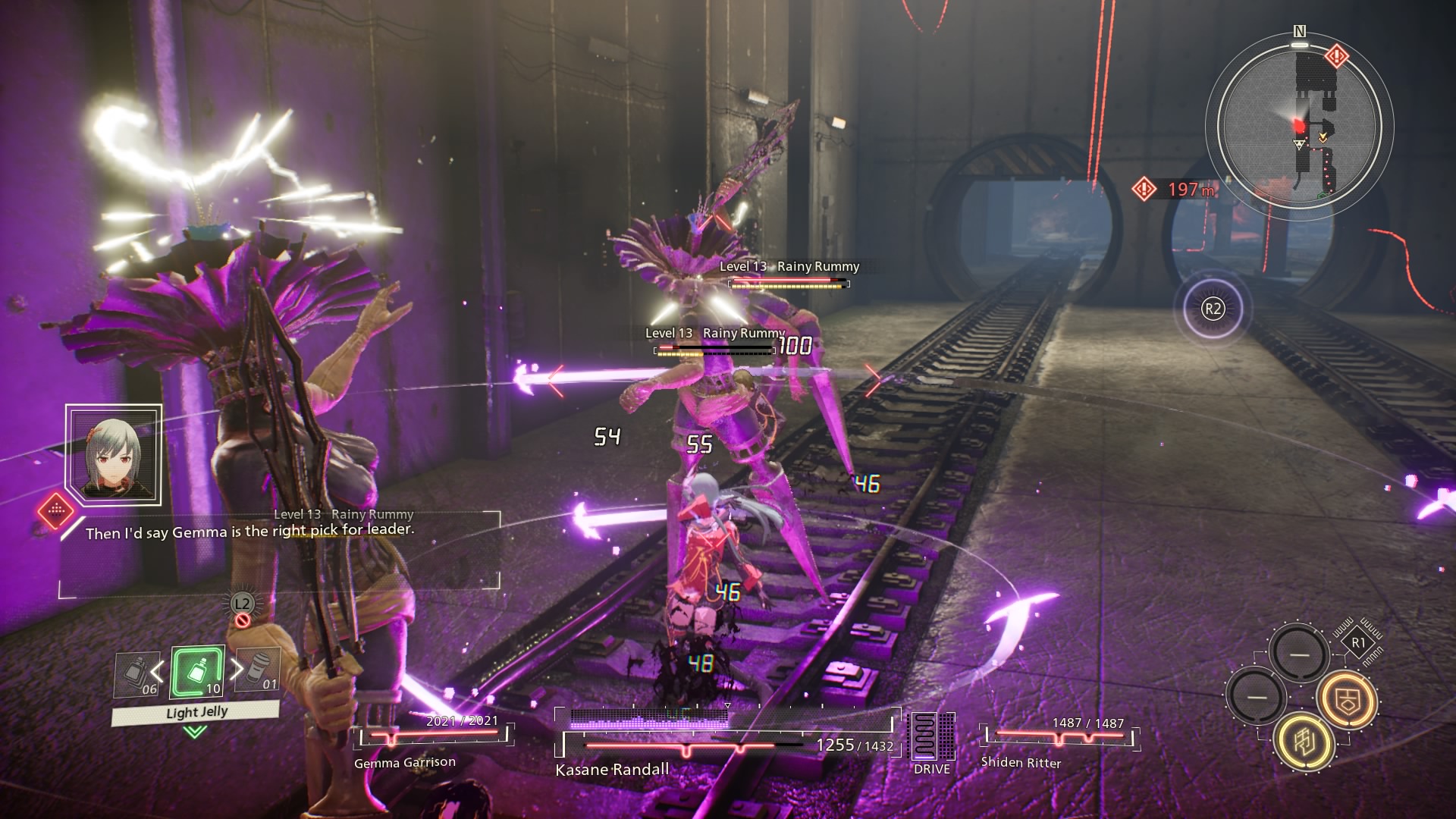 The Other designs as well are fantastic. Each one has this otherworldly feel to them, despite being made up of common objects and elements. They’re familiar, but haunting and terrifying because they are and happen to be cobbled together. But then, Scarlet Nexus in general is good at setting you off-kilter. New Himuka looks fine, until you notice the red strings everywhere and the neon suspended in midair. The use of technology makes it feel foreign, so much so that when natural elements something as simple as a cherry blossom tree appears, it feels as wrong as an Other. It has this very particular aesthetic and employs it quite effectively.

Scarlet Nexus also very much feels like a Bandai Namco game that learns from games like Code Vein or God Eater, both with its story, pacing with regard to spoilers, and characters. It moves at a good clip, sending out a lot of information in a way that gives you a Phase and a downtime period to digest what you’ve learned. Interacting with other people encourages grinding, since gifts for them come via exchanging parts from Others to unlock conversations, bond episodes, and more features for their abilities in battle. 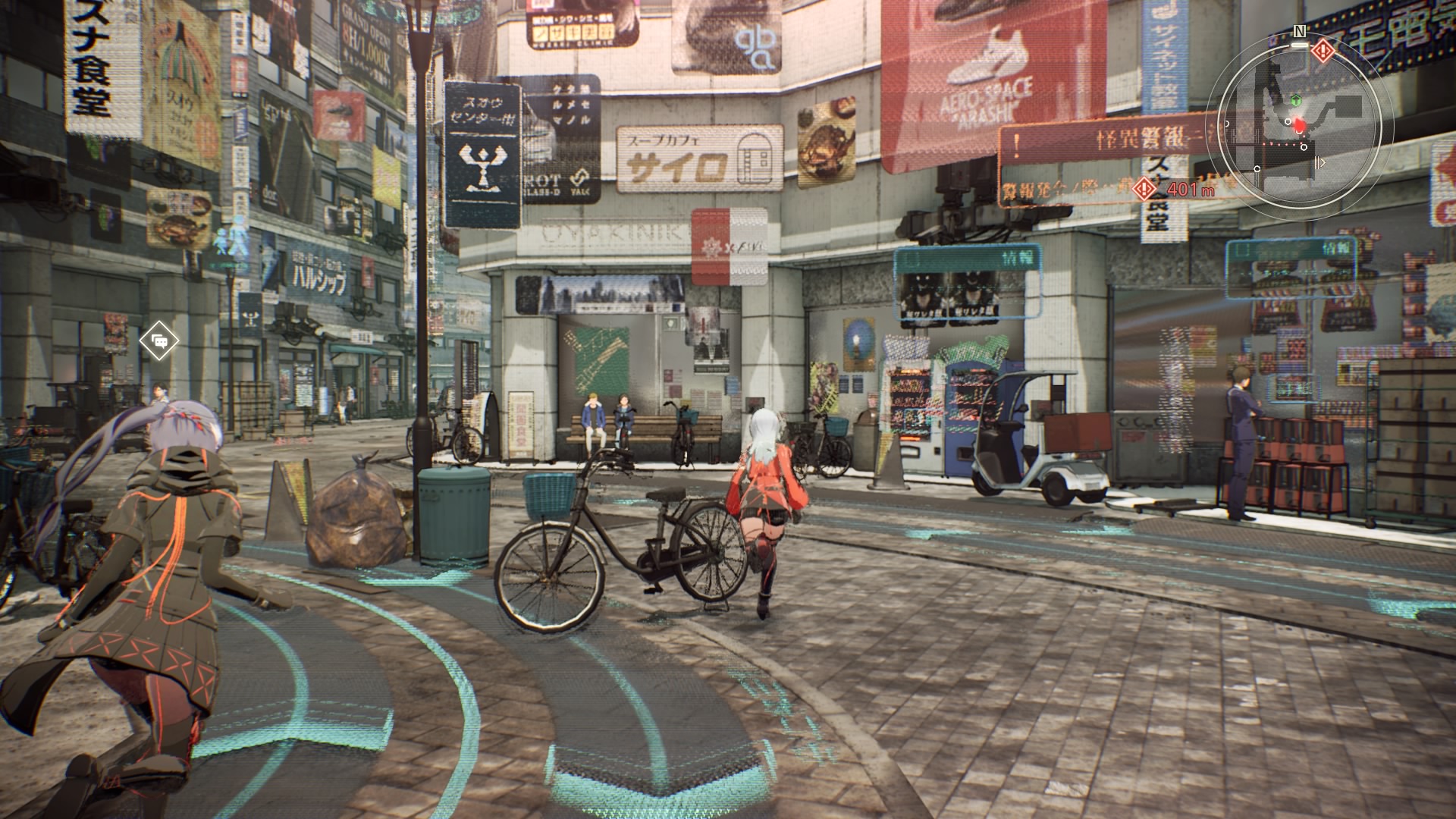 Scarlet Nexus is a game that has its quirks, say with the way its story is told and how things like its double jumps may feel. It can get complex, maybe even to an extreme. But it is incredibly stylish and engaging. Scarlet Nexus is full of moments where I wanted to gush about the spoilers I’d encountered and characters I’d met. I wanted to go on optional sidequests and fight to see how different approaches would work. It left me feeling skilled and satisfied in a way many action-RPGs don’t, and I appreciate that.

Scarlet Nexus will come to the PlayStation 4, PlayStation 5, Xbox One, Xbox Series X, and PC on June 25, 2021. An anime adaptation is running and people can view the first episode with Funimation.

In the far distant future, a psionic hormone was discovered in the human brain, granting people extra-sensory powers and changed the world as we knew it. As humanity entered this new era, deranged mutants known as Others began to descend from the sky with a hunger for human brains. Highly resistant to conventional attack methods, extreme measures needed to be taken to battle the overwhelming threat and preserve humanity. Those with acute extra-sensory abilities, known as psionics, were our only chance to fight the onslaught from above. Since then, psionics have been scouted for their talents and recruited to the Other Suppression Force (OSF), humanity’s last line of defense. PS4 version reviewed.
8