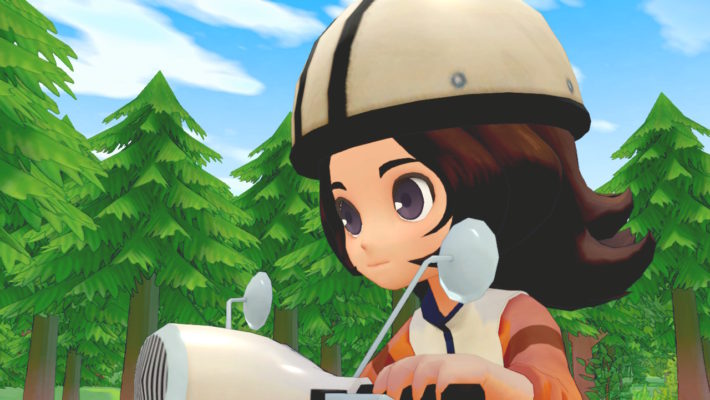 Another Story of Seasons game sprouted and this time around, you can see the its growth. It feels like Marvelous is genuinely learning from both Bokujou Monogatari and contemporaries like Stardew Valley and My Time at Portia. Which is great, since it’s already a game I’ve spent over an in-game year on. But at the same time, it’s continuing the tradition of a Bokujou Monogatari that doesn’t feel exactly “set” at launch, but fortunately seems to be getting patched as things go along.

As is common in Story of Seasons, the game begins with the player inheriting a family home. Their grandfather helped found Olive Town, and you kick things off by returning to it. After determining how you look (all hairstyles, both body types, and both clothing options are available and you choose your gender later), you take off on your scooter. Which breaks down. Fortunately, you make it to Olive Town, which happens to have a mechanic! The mayor welcomes you to the farm, helps you get settled with tools, and it’s up to you to make the most of things. 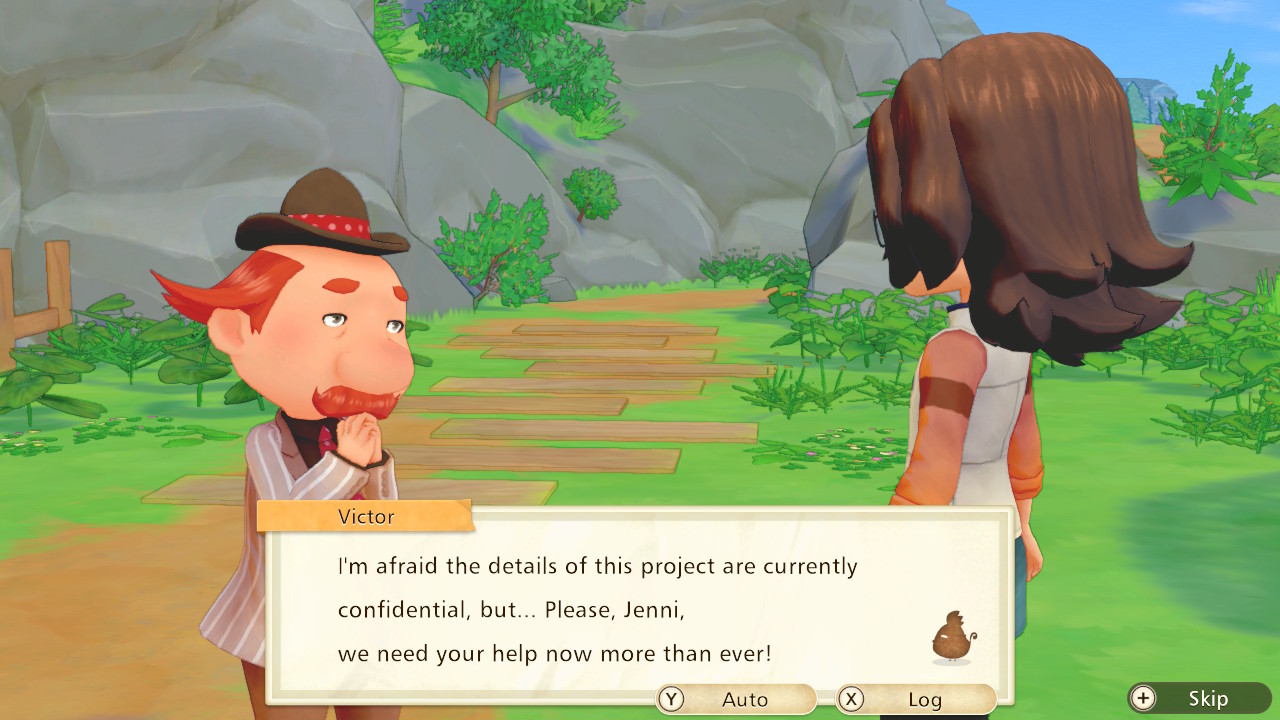 Many of the staples of the series are here. Like Story of Seasons: Friends of Mineral Town, you have a Seedling Mode that increases crop values and makes things a bit less intimidating and a Normal Mode. Crops are your main money makers, but you can also fish, mine, and raise animals. However, there are some elements from contemporaries that make it a bit easier to build a foundation and settle yourself.

For example, you start with a small portion of your land available. It has your tent, enough area for a few fields, a small mine, trees, a busted chicken coop, and a broken bridge to another area. There will also be a wild chicken around, ready to be tamed once your coop is repaired so it has somewhere to live. To progress, you have to farm, sure. But you also need to gather materials to build various makers. When you have the bricks, ingots, lumber planks, and spools of threads from those, you can start fulfilling town requests and repairing elements of the farm. 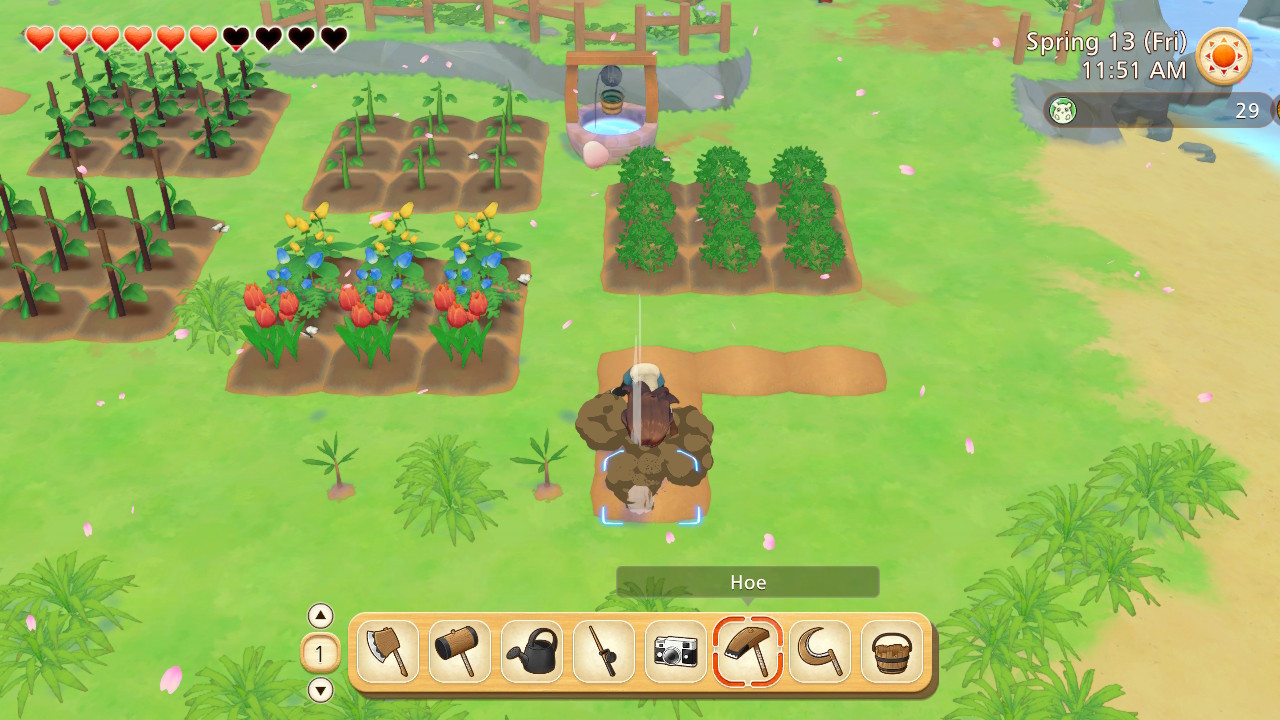 After you get the bridge fixed, you gain access to an area with a larger mine, a dilapidated barn, more kinds of resources, and also more wandering livestock in need of taming and a new home. It happens again once you clear boulders from an incline into a third area. You also are constantly finding little supernatural creatures called Earth Sprites, which can be used to help bulk up free items you get from them in their village, unlock access to new areas, and provide opportunities to increase your stamina.

Finding animals isn’t the only sort of “discovery” present in Story of Seasons: Pioneers of Olive Town. You’re constantly finding new things that offer additional motivation to progress and improve. Using skills, like beekeeping, tending an orchard, working in the field, mining, or conversing with people will level up that area of expertise. When you do, you might become more effective at a skill or gain new recipes for different foods, makers, or items. How do you get new animals, items, or seeds in the stores? Shipping crops you grow, wild crops you find suddenly growing on your farm, or after taming certain animals. (In some cases, you need to wait for certain seasons to come before creatures like rabbits show up, even if you’ve already unlocked them.) It’s all very motivating. 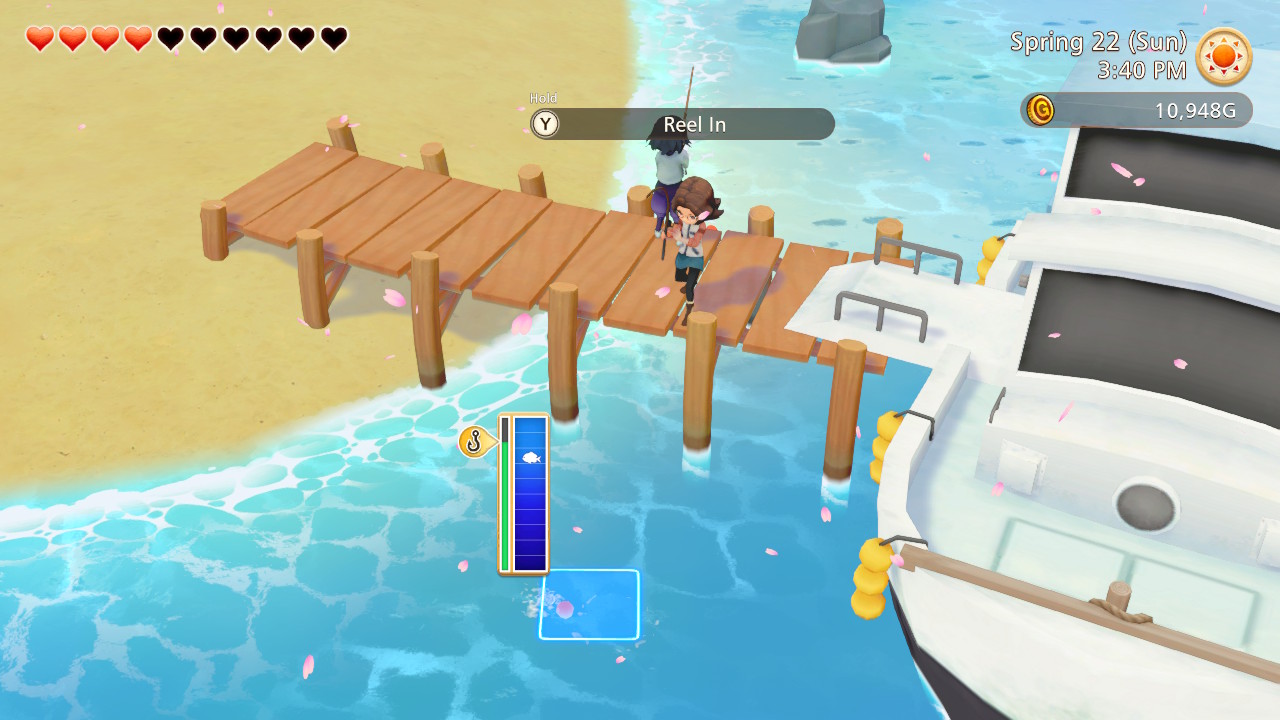 Especially since Story of Seasons: Pioneers of Olive Town is good at providing people with goalposts and milestones. The mayor regularly comes to visit with tasks that require certain amounts of materials and change how Olive Town looks. Residents will ask for items at town hall, and the local gourmet will reward you with things like makers for cooking certain recipes. There’s a museum you can fill with photos of animals, artifacts, and fish. Reaching bottoms of mines can unlock Earth Sprite minigames, as can buying upgrades at a shrine. Every busted building on your property involves realistic numbers of materials to improve. Customization elements are at play too, as you determine where buildings, furniture, and makers go and can create clothing. (It can feel a bit like Harvest Moon 3D: A New Beginning.) Unfortunately, makers are limited at the moment in how much they can take and provide and you can’t place anything anywhere in homes, which feels a bit limiting.

There are also varying degrees of technical difficulties. Which, to Marvelous and XSEED’s credit, I’ve already started to see patched ahead of launch. Having online capabilities on, which allows you to see others’ photographs on loading screens or custom farmers as visitors, at one point greatly increased load times. (I’ve turned it off to avoid that, since it didn’t add to my experience.) Before the very first patch, the game would sometimes freeze after totaling up my profits for the day and auto-saving. That hasn’t happened for a while. Some problems remain, like pop-ins if you’re moving into a densely packed area. Your character can slow down a bit in a packed area. (Say, if you have a lot of makers all with finished products.) Puddles and trees spawn at an incredible rate, so I’m constantly fighting to keep up with them. 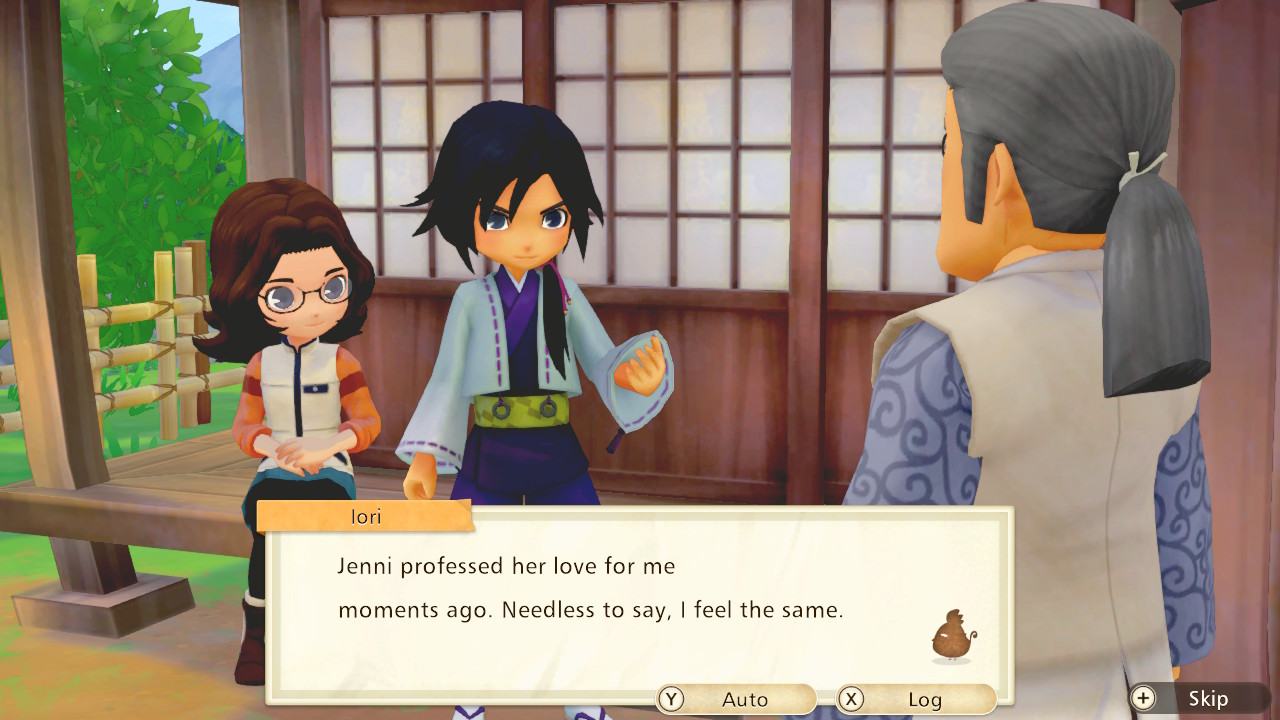 The biggest problem is the issue I had with the love interests in Story of Seasons: Pioneers of Olive Town. The characters look great! Their backgrounds make it seem like they should have a lot of personality! I honestly love abandoning character portraits in favor of actually seeing expressions on faces. But in practice, they don’t really stand out. I found it difficult to really determine who they are. Iori likes fishing and is from a noble family. Damon has a rebellious tone, but really he seems like a fairly normal guy who likes coffee and motorcycles. Laura is friendly! Bridget likes animals.

Which is a shame, because the people you can’t marry can be genuinely interesting! Story of Seasons: Pioneers of Olive Town has one of the most diverse casts I’ve ever seen in a Bokujou Monogatari, and it’s handled in a way that doesn’t make that seem forced. I genuinely enjoyed the segments where you get to know all of them and see peeks at their lives. It made me wish Clemens or Jacopo were love interests, because both seemed more interesting and showed growth. I’m a huge fan of the supernatural characters as well. Yes, it would have been nice if there were more festivals to spend time with people, but I’ve triggered so many natural encounters with them that it seems to make up for it. 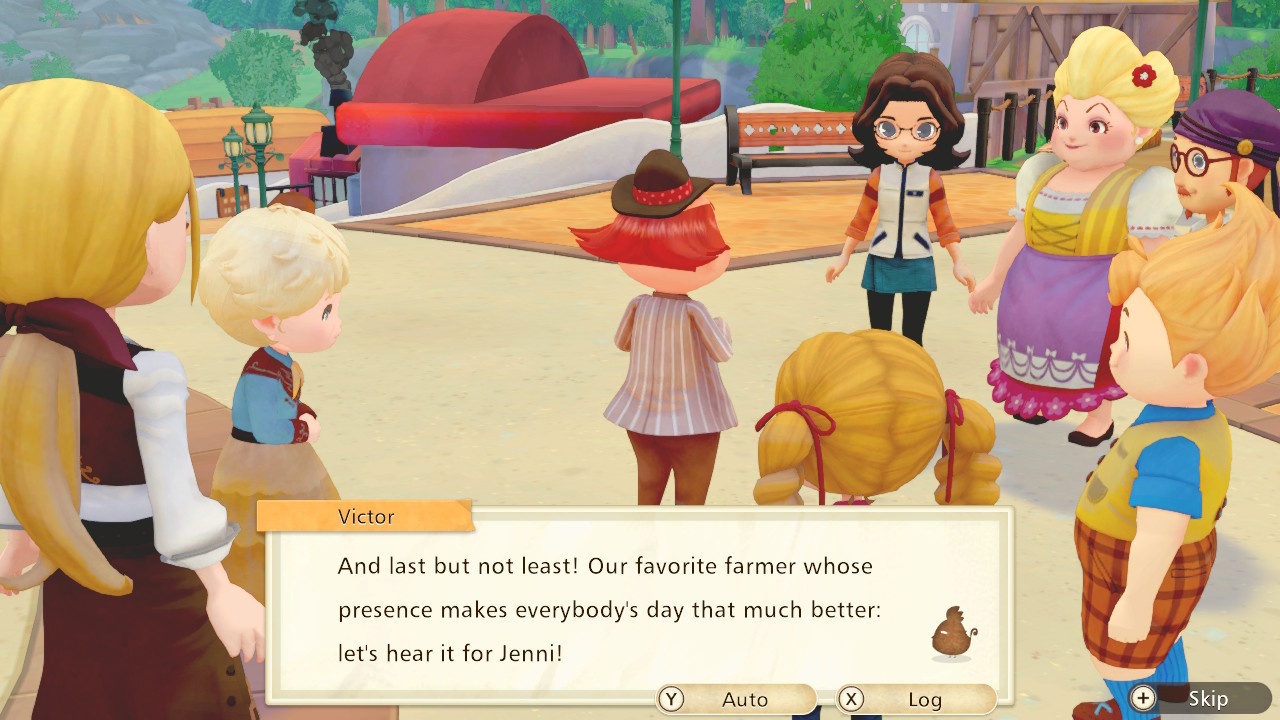 There are some areas in which Story of Seasons: Pioneers of Olive Town feels like it definitely needs a little more time and room to grow. The progress I’ve seen in the time I’ve played is encouraging, and I’m confident that it will offer plenty of opportunities down the way. People who enjoy these sorts of farming sims for the progress you can make and routines you can build will be pleased. Especially since it constantly offers new hallmarks to hit. Those in it for more of the social elements, especially things like festivals and building a fulfilling relationship, might not get as much out of it until some later patches and add-ons appear.

Story of Seasons: Pioneers of Olive Town is available for the Nintendo Switch.

Welcome to Olive Town, a peaceful community established by your trailblazing grandfather and his friends. Now that you've taken over his farm, it's your job to carry on his legacy. Plant crops, raise animals, build relationships, and get to know the residents of your new home in this brand-new entry in the Story of Seasons series!
7