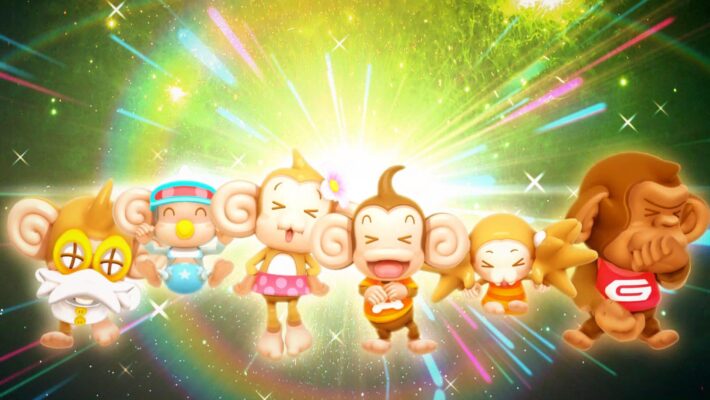 Super Monkey Ball is back! And this time, what’s returning is what most players love: the stages and minigames from the series’ early installments. Sega clearly intends Super Monkey Ball: Banana Mania to be a marquee release for the franchise, with a host of courses, modes and cameos. But with Monkey Ball, gameplay is king. And, as history has shown, really hard to get right! But Banana Mania does its best, and its best is honestly pretty okay.

Super Monkey Ball: Banana Mania is meant as a celebration of the series’ early games. It includes hundreds of stages from Super Monkey Ball, Super Monkey Ball 2 and Super Monkey Ball Deluxe. A selection of 12 minigames from those releases is here, too. It doesn’t entirely look inward, though. Through a series of cameos, both included and as downloadable content, it looks to expand the game’s audience to fans of Sonic, Yakuza, Persona, and other Sega franchises. (And some non-Sega properties too, like Hello Kitty and Monster Rancher.) Banana Mania definitely takes the Christmas tree approach, unafraid to keep adding ornaments in an attempt to catch your eye. 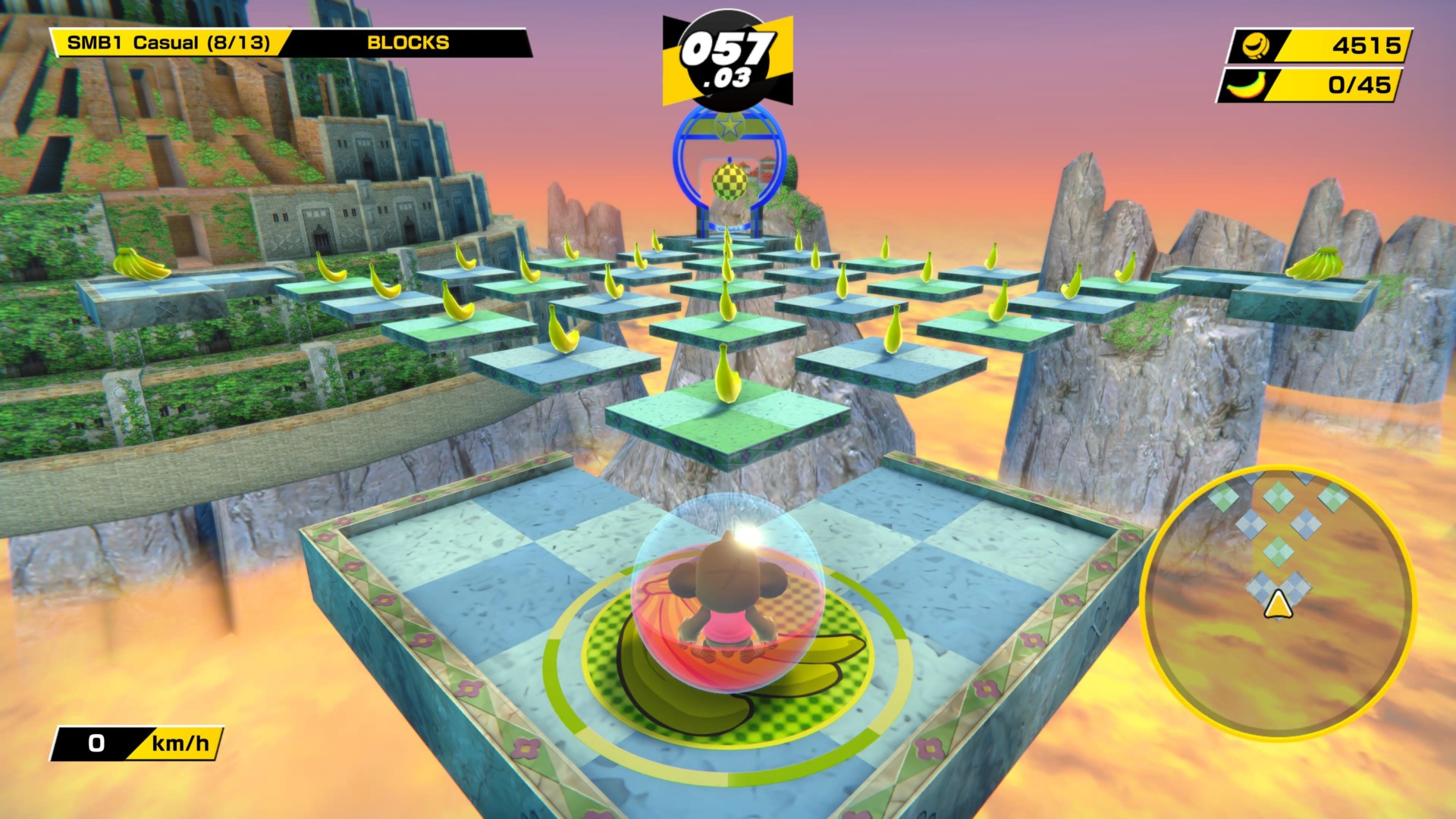 In terms of sheer content, it’s hard to beat the offering in Super Monkey Ball: Banana Mania. It packs in so many levels from those first three games, delivering them in a lot of different ways. There’s the Story Mode. There are challenge packs. There are even more special modifiers to unlock. Each of these games’ stages are held in higher regard than Banana Blitz’ offerings, and for good reason. The first game built a focused challenge. The next ones broadened things out, with some stages that were more manageable on-ramps for new players. Past that? Hey, it’s tough to iterate. But it’s good that these stages are included here.

Story in the early Monkey Ball games ranged from nonexistent to notoriously bad and plodding. Banana Mania splits the difference, offering the basic story beats to those who want them. These segments are presented as talking-free, simple motion comics, watched by the monkeys on a television. They’re fast. They’re painless. Generally, it feels like a smart choice. Still, it’s an interesting setup: the monkeys are watching TV shows about themselves? It’s probably best to not put a lot of thought into it. 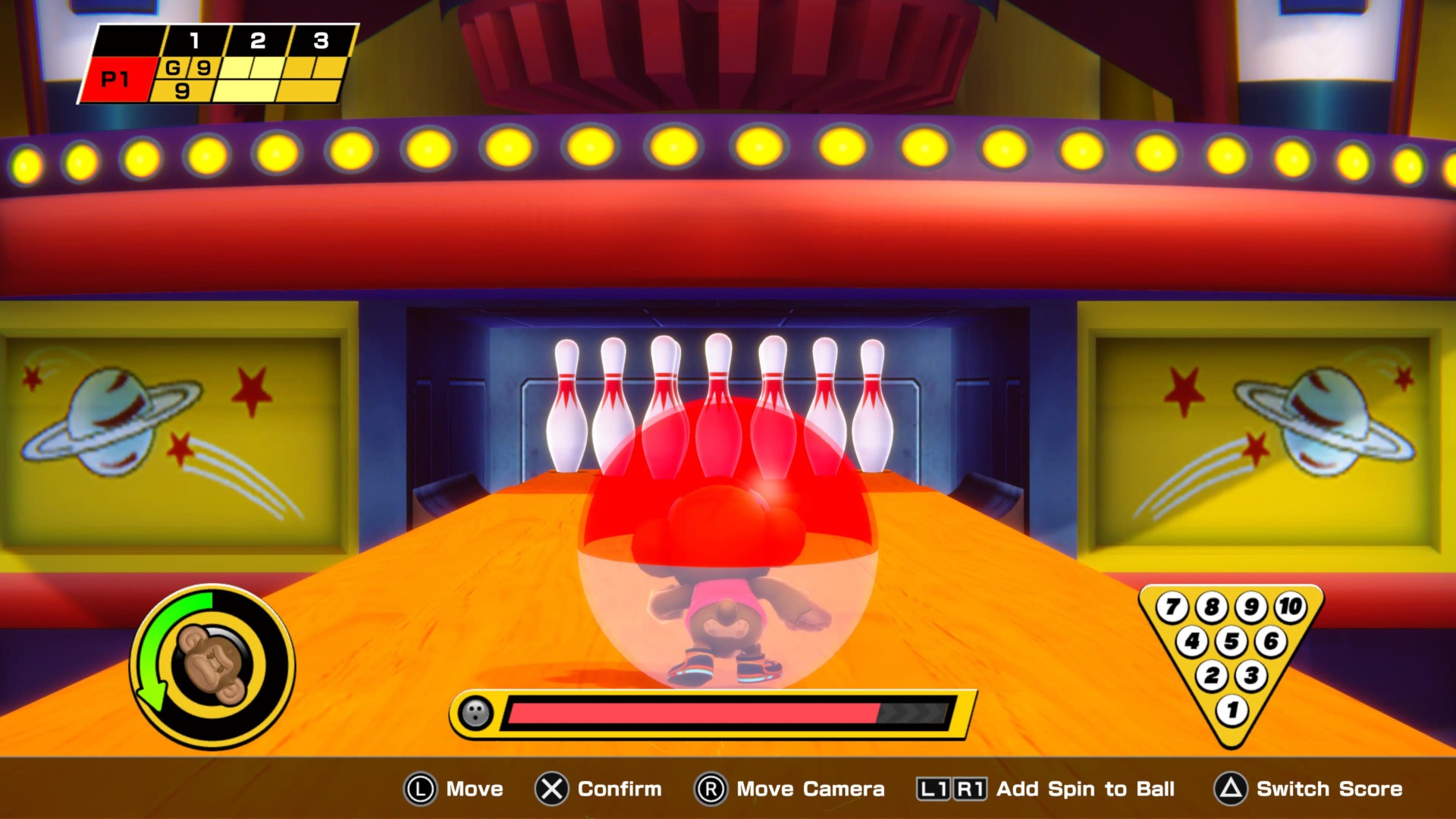 Banana Mania also manages to improve upon its minigame offerings. It still loses a little bit in translation, but the games here are close enough to their original forms to offer similar charms. And as with any Monkey Ball release, this one’s collection is full of gems and duds. Monkey Race, Monkey Fight, and Monkey Bowling are still standouts. Monkey Target’s controls feel a bit finicky, making it a much tougher experience than the classic event. The shooting games? Monkey Boat? You can probably skip them.

In the early GameCube days, these were particularly useful as stopgap activities until the console’s library broadened. Even without nostalgia, there’s still something about the better ones’ depth that makes them worth checking out. Monkey Golf is sometimes punishing in a way that makes success feel great. Monkey Baseball is something of an exercise in futility, but there’s a zen value to it. Still, Monkey Fight is likely the marquee event, and with how frantic it can be as groups learn and strategize? It’s a good time.

While the game includes online functionality in the form of myriad leaderboards, the minigames are sadly a local-only affair. Still, on platforms that allow remote or share play, a lot of them hold up well. You may lose some of the timing precision, but unlike the truly punishing main game, these side modes are a bit more forgiving in that respect. However you manage it, any game’s better with friends, but Monkey Ball certainly amplifies that effect. 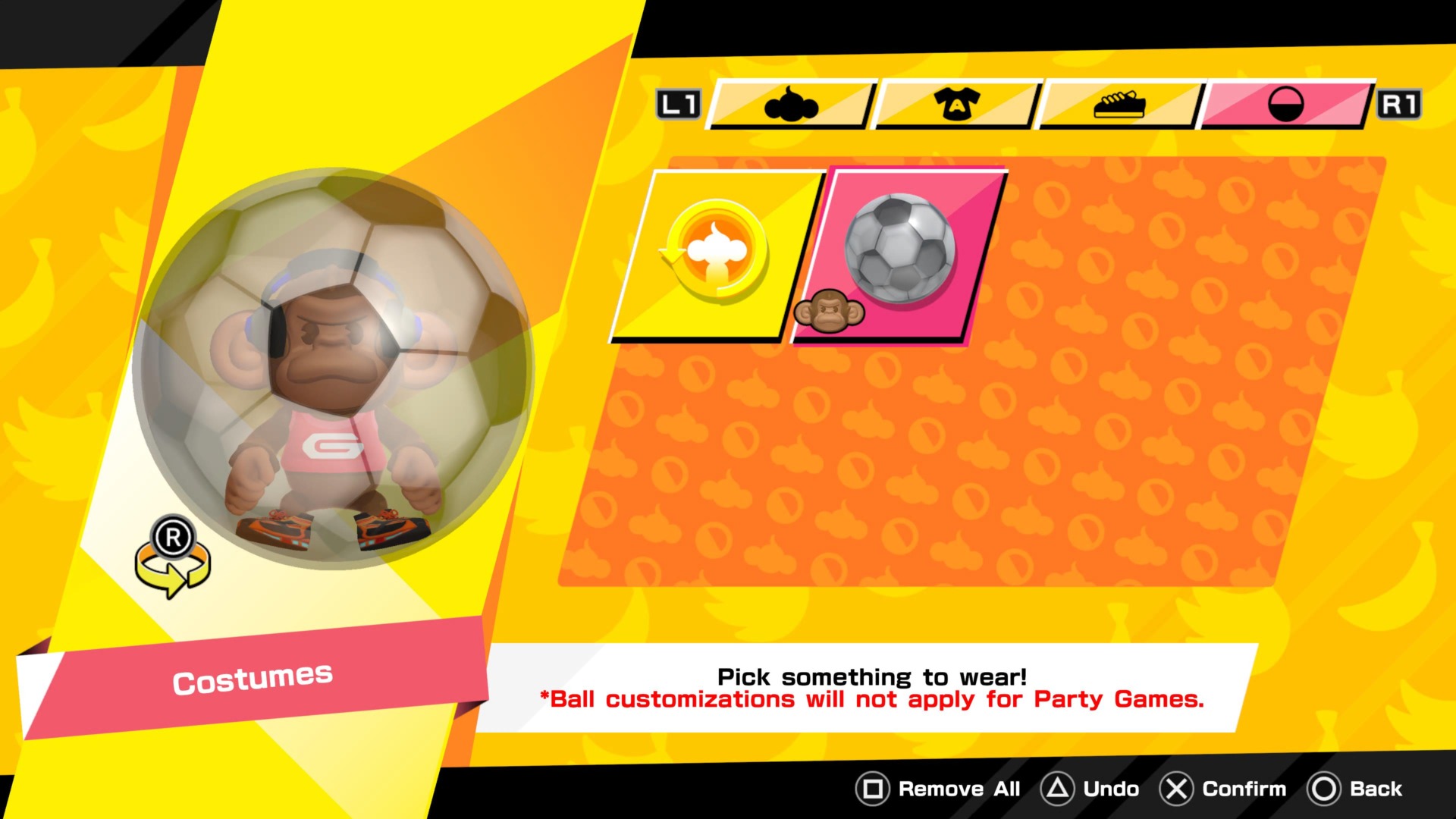 Though it certainly takes some strides in the right direction, Banana Mania suffers from some of the same polish issues as Banana Blitz HD. Its menus can’t help but feel cheap. Its controls feel just a bit off. And we do mean a bit! They’re close, and most people will probably be fine. But with a game this much about precision, “a bit” is noticeable. The game’s built in Unity, and we’ve repeatedly seen it implemented better than this, but there’s a signature jankiness that tends to come through in shoestring Unity projects.

And it might be due to a lack of focus. It’s fun to have cameo characters and costumes, sure! (Though we’re doubting the value of some of the paid add-ons.) And it’s fun to have gallery modes and such! But it’s right on the precipice of feeling fully-baked, and a bit more work on making things feel as they should would have helped. It doesn’t help that you’ll occasionally encounter really low-resolution images in prominent locations. (Like every load screen?) The game was likely optimized for the lowest tech specs — hi, Switch — but it’s strange that it doesn’t adjust on more powerful platforms. 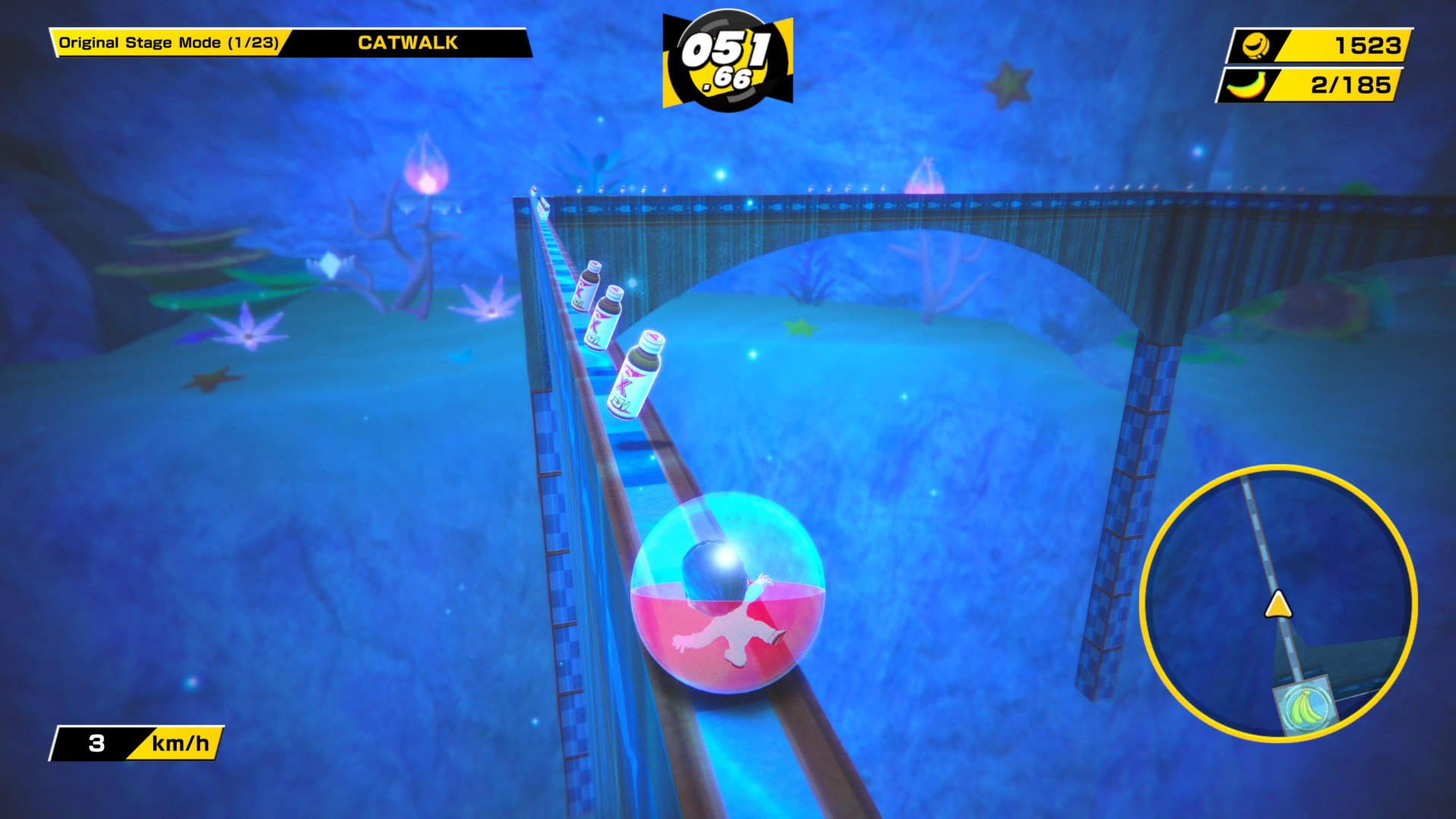 Nevertheless, we can’t help but be heartened by the progress. The Super Monkey Ball franchise has been rolling down a slope for a while now, so even a step or two back in the right direction is nice to see. And hey, solid versions of the minigames on modern platforms? That ain’t nothing.

Join the all-star monkey team of AiAi, MeeMee, GonGon, Baby, YanYan and Doctor as you bounce, tilt, and roll your way across hundreds of delightfully crafted levels and mazes. PlayStation 5 version reviewed.
7

With Monkey Ball, gameplay is king. And, as history has shown, really hard to get right! But Banana Mania does its best, and its best is honestly pretty okay.