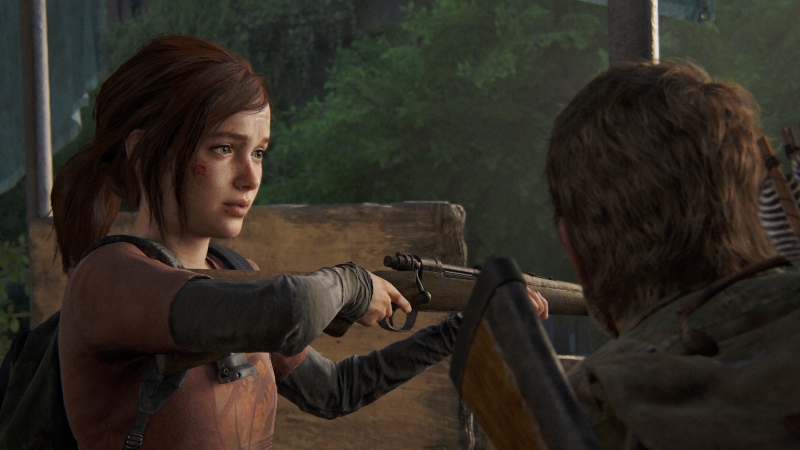 The Last of Us is back, although, in all honesty, it feels like it never left. In fact, now that I’ve had a chance to play The Last of Us Part I, it feels like this nine-year-old story’s just arrived. Naughty Dog’s 2013 post-apocalyptic saga comes to the PS5 looking like it was originally developed for that console instead of the one released two generations back. That’s because it has been, effectively. Naughty Dog trumpets that the game is “rebuilt” for the PS5 (and eventually for the PC), and having played the thing, I believe them.

That leaves one question: Is it worth it?

The Prettiest of Us

Personally, I think so. On looks alone, The Last of Us Part I is a stunningly beautiful game. In a lot of ways, it looks exactly the way I remember the original looking in 2013 on the PS3. Where my memory and imagination filled in the gaps in texture resolution or water effects or fancy lighting, Naughty Dog’s used modern hardware to make it “real”. The result of nearly ten years of new know-how and lessons learned developing every game that came between The Last of Us and now expresses itself in this reincarnation. The game includes “Fidelity” and “Performance” graphical presets. I preferred Performance mode, as I don’t have the fanciest TV and liked the additional smoothness of a 60fps framerate lock, but even then, Part I looked quite grand. Even little touches, like the way algae on the water’s surface deforms around a character when they swim or the dense spores choking the air out of infested areas, added to the sense of atmosphere.

The same attention to detail’s been given to character performances. Whereas the bells and whistles and fancy effects can get lost on you in the midst of gameplay, the cutscenes look top-notch (and indirectly put even more pressure on the upcoming live-action series to excel and stand out). Troy Baker and Ashley Johnson are as powerful as ever in the roles of Joel and Ellie. As far as I can tell, Naughty Dog didn’t actually re-capture their performances for this remake. Instead, they re-did the scenes using the same motion capture data, updating character models and tweaking the end result to be an “enhanced” version of the original scene. Lighting, angles, and effects were changed, the better to achieve that “prestige TV” cinematic look they always wanted to go for.

Even a few character designs were changed, but I honestly didn’t notice the differences until I did a side-by-side comparison against video of the original game. But whether or not Ellie looks more or less like a certain real-life Hollywood actor or not, the voices and performance capture were what sold the sell the many moments of The Last of Us nine years ago. Now, characters emote more visibly, tears welling up when they’re agitated, skin flushing when they’re mad. The Last of Us Part I renders cutscenes in real-time now, too. This means you can even mess around with them in the game’s extensive photo mode, adding filters and effects, and even adjusting the lighting to get a different vibe.

The “prettiness” also extends to some of the game’s heavier elements, particularly when it comes to violence. The Last of Us Part I might have some of the most jarring gore effects I’ve seen since 2002’s Soldier of Fortune 2. Plenty of games have blood and guts, but Naughty Dog’s devotion (fixation?) on cinematic realism lends a frankly unsettling quality to its battles, one made more unnerving by modern graphical bells and whistles. Bullets dismember enemies, while headshots actually deform characters’ skull models, leaving wet-looking chunks and blackening bloodstains all over the aftermath of a gun battle. It’s a small touch, but it was morbidly fascinating to notice that a dead body’s blood pooled and flowed following the contours of the tiled floor. Thankfully, more squeamish players can turn that stuff off easily.

The story is the same as it’s always been, one of a bad man bonding with a young girl in the most trying circumstances imaginable. There are some powerful moments in this ultimately melancholy tale, and while the novelty of it has worn off after nine years of tiresome discourse, riffs upon riffs (not to mention that the game itself is a riff on fiction like The Road et al), and the expanded context of its sequel, the heart of it still beats.

The Value-for-Money of Us

The Last of Us Part I is indisputably the definitive version of this story as far as visuals and “immersive” effects go, but when it comes to whether that’s worth the purchase, the answer’s a bit more complicated. From the perspective of pure consumer value, The Last of Us Part I is honestly a tougher sell than it looks. After all, if you own a PS5 and have a PS Plus subscription, you’re already entitled to The Last of Us Remastered, free of charge as part of the PS Plus Collection. It and Part I  – and by extension, the PS3-era original – are in terms of core content, exactly the same game. Same characters, same story, same wrenching plot twists. If you played the original (or Remastered) and don’t feel the need to come back to it, a much prettier version of the same story won’t tip the needle in that regard, either.

The team at Naughty Dog reworked the game’s combat and pathfinding AI to behave more realistically, incorporating features and behaviors developed for the sequel. But combat is more than just AI behaviors, and with the map layouts and general encounter design largely being the same as the original, the differences in enemy and ally behavior come across as largely cosmetic. For example, allies will now behave more realistically and do better at hiding from enemies, but you’ll still occasionally see them standing still in the sight of multiple foes and suffering no consequences. After all, no matter how smart their AI is, the game’s designed not to penalize you for failing to escort Ellie or Sam or any other companion. After all, it would suck if you failed because an enemy managed to flank an NPC you had no control over. In this sense, AI and combat design innovations from 2020 and beyond end up constrained by 2013’s level and encounter design. So even though they were much prettier and more atmospheric than before, my least favorite sections of The Last of Us were the same in 2022 as in 2013.

There are also some extra modes that could help change the value proposition of The Last of Us Part I, particularly for the type of fan that’ll revisit the game again and again. Optional cosmetics allow players to play dress-up with Joel and Ellie. A character model viewer, art gallery, and even developer commentary to gain insight when replaying sections. Speedrun mode is also available, unlocking in-game timers and recordkeeping. For PS5-specific features, Activity Cards and Game Help is fully supported. The Activity Cards are particularly useful for players trying to earn the Platinum trophy, as they track and reveal locations for collectibles, without having to look that stuff up from an outside source.

The Most Definitive of Us

All my snarking about value goes out the window, though, if you happen to have disabilities and find yourself wanting to play the game. The Last of Us Part I is easily one of the most accessible games I’ve ever played. Naughty Dog took the already accessibility features developed for Part II and built on them to incorporate into Part I. Screen reader support, navigation and gameplay assistance, awareness indicators, and dozens of other options make the “quality of life” for a potential disabled player much smoother. You can customize the HUD, adjust effects for motion sickness and color blindness, and more. These accessibility options even extend to gameplay, allowing you to toggle off things like losing your breath while underwater, adjusting enemy accuracy, and even making stealth more forgiving. You can even set and customize audio cues for combat to make it easier to tell what’s happening if you’re vision-challenged.

This also goes for difficulty options as well. Separate from the accessibility menu, players can tweak the difficulty to their liking, setting presets for individual qualities of combat. Do you like the lethality of combat in the higher difficulties, but hate how miserly these modes are with resources? Ask no more, because you can adjust those settings in the menu. For the masochists, the “Grounded Mode” preset also makes a return, turning off most of the in-game aids like the HUD, the “listening mode”, and other seemingly essential survival tools. In Grounded, you can even be detected in stealth by enemies that hear you trying to reload your weapon. In short, if you enjoy having a more customizable gameplay experience or need additional options to play smoothly, The Last of Us Part I is the must-play version.

Whether or not it truly needs to exist, the fact remains: The Last of Us Part I does exist, and it happens to be the best version of an already pretty good game. The additional accessibility options alone justify it for that section of players. Meanwhile, those who are interested in experiencing its story when it looks its best, whether as a first-timer or a veteran revisiting an old favorite, should strongly consider playing it. For everyone else, the other versions are available for less.

The Last of Us Part I will launch on the PS5 on September 2, 2022. A PC version is also in development but has no release window at this time.

The Last of Us: Part I